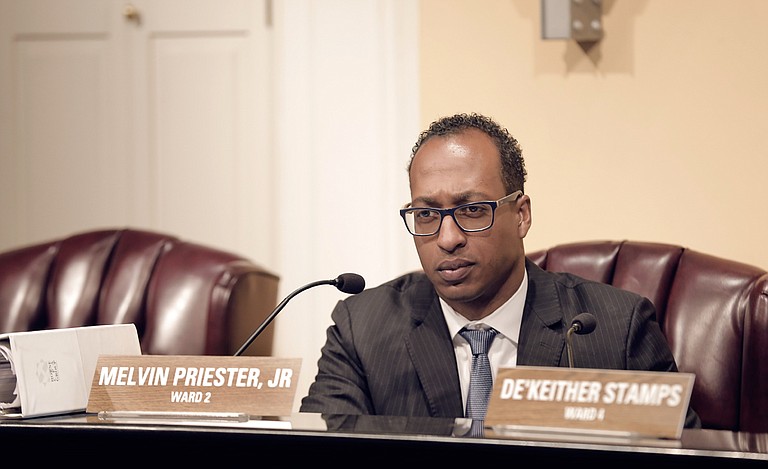 Ward 2 Councilman Melvin Priester Jr. proposed an amendment to the City's budget that outlined across-the-board cuts to travel as well as $100,000 cuts to both the mayor's office and chief administrator's office. Photo by Imani Khayyam.

JACKSON — The Jackson City Council today approved cuts to travel for all departments, as well as cuts to the mayor's office and the chief administrator's office, to push back against the closing of the City's Americorps program, which focuses on community improvement projects by youth. It was slashed in order to balance the City's proposed budget.

Ward 2 Councilman Melvin Priester Jr. suggested an amendment to the council's motion approving next year's budget that included reducing dues and memberships to all departments by 30 percent, travel in all departments by 40 percent and air travel by 60 percent.

In addition, Priester suggested that the chief administrator's office and the mayor's office both cut their personal services, including salaries, by $100,000 each. His amendment outlined a cut of $100,000 to the legal department with a movement of $150,000 to a fund for outside counsel.

Priester said he wants to cut $100,000 from the Parks and Recreation Department allotted for golf courses, which would also cut the potential revenue from those facilities by $60,000, giving the total revenue gained by that specific cut at $40,000. Altogether the amendment freed up $150,000 for Americorps, Priester said, saving the program.

Priester said that the cuts, for him, are preferable to cutting the Americorps program altogether.

"Americorps is one of those things where these kids are not going to be able to be in this program, and we are going to lose a huge number of man hours that directly benefit the city of Jackson and change people's lives," Priester said. "I couldn't sleep last night, thinking that we were not going to have the Americorps program under our watch."

Mayor Tony Yarber said his office would be cut, but only if the council did the same, a point the body disputed.

Council Vice President Margaret Barrett-Simon supported Priester's proposed cuts, stating that she, along with Priester, did not have an assistant and avoided using city resources.

"I don't want to get in a back-and-forth about this. I just think the public needs to understand one thing: I have one intern, part-time, he's a student. I provide my own car. I provide our own gasoline, as does every single person up here," Barrett-Simon said. "And to nitpick the council budget is outrageous, Mayor."

"Your budget isn't being nitpicked; mine is," Yarber said.

The council eventually approved the budget for the next year.

UPDATE: Mayor Tony Yarber released a statement a couple of hours after the city council meeting.

“The Jackson City Council on Tuesday, Sept. 13, passed a budget for the fiscal year that begins Oct. 1, 2016. The plan includes a number of measures required to address the City’s forecasted decline in revenue. Those measures include a millage increase by 3.00 mills, spending reductions and departmental restructuring and reorganization. Before adopting the budget, the City Council amended the proposed budget to make additional cuts to the Mayor’s Office, but not to the City Council or the City Clerk’s Office. As a result of the Council’s action, the City of Jackson’s PEG Network will not be funded in the upcoming fiscal year. The budget approved by the Council also will result in the closure of the Grove Park Golf Course.”

UPDATE: To clarify, the Jackson City Council approved an amendment to the proposed budget, which passed 4-2, to include the cuts outlined by Councilman Priester. The Council then later approved the whole of the proposed budget for next year on a vote of 4-3, with Ward 1 Councilman Ashby Foote, Ward 3 Councilman Kenneth Stokes and Ward 4 Councilman De'Keither Stamps all dissenting.