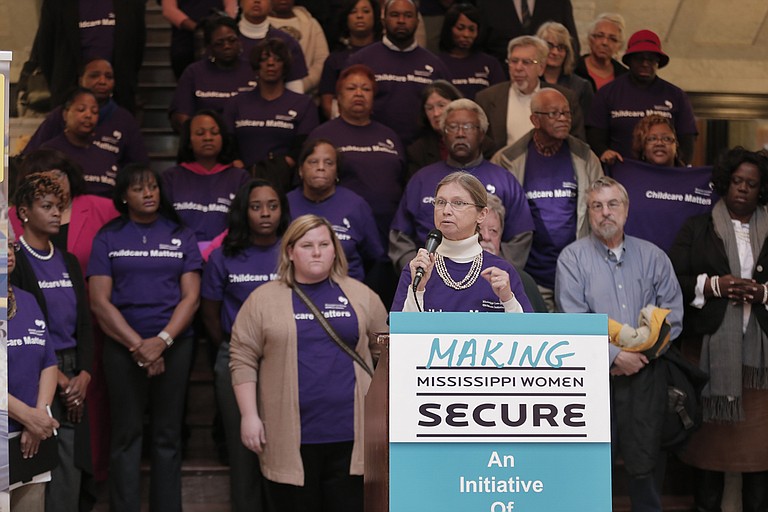 Carol Burnett, the executive director of the Mississippi Low Income Childcare Initiative, says her organization plans to bring forward legislation in the 2017 session that will help single moms around the state afford childcare. Photo by Imani Khayyam.

JACKSON — Some of the state's most vulnerable children won't immediately lose their child care, even if their guardian finds a job and loses support from the Temporary Assistance for Needy Families program.

The Mississippi Department of Human Services recently changed its policy manual to clarify that children who receive subsidized child care, or are in protective custody, will not be cut off if their parent is no longer eligible for TANF.

Carol Burnett, the executive director of the Mississippi Low-Income Child Care Initiative, says the new policy change mainly affects low-income single mothers around the state. Previously, she said mothers who received TANF government assistance and subsidized child care would struggle to pay for child care once they found jobs. This led to interruptions in care.

"These moms would get a job, earn money and become ineligible for TANF and lose their child care, then they'd have to re-apply through the regular child care welfare system," Burnett said. "And that process is not any different except that when they get in that pool, they get put on a waiting list."

The Child Care and Development Block Grant is not fully funded on a federal level, and Burnett and her group plan to push the Legislature to increase funding for early childhood care in the upcoming session.

"Child care is expensive," Burnett told the Jackson Free Press. "Child care costs a lot, and for a family where the parent is getting a minimum wage, child care takes a huge chunk out of what they earn."

The fiscal-year 2015 MDHS annual report shows that 31,084 children in the state received subsidies for child care that year. There are 212,000 children in poverty in the state, the most recent Kids Count data show, however. Burnett said access to child care for low-income families is still a challenge in the state.   Burnett and her organization advocated for several changes to the MDHS policy manual, in light of federal changes to rules. Burnett said the state should put more money into its child care program either way, especially because the latest federal regulations are at least, in part, an unfunded mandate.

"We're real happy with this change—it's going to bring real stability for the year," Burnett said. "But the big issue that the state really needs is more money to serve more kids, and that continues to be a big challenge."

Last year, Burnett's organization advocated for legislation to increase funding for early childhood care, expanding Medicaid and offering protection for domestic violence. None of the bills passed, but Burnett said her organization is planning town-hall meetings this fall and expects to come back to the Capitol to present legislation that helps address women's economic security in Mississippi.