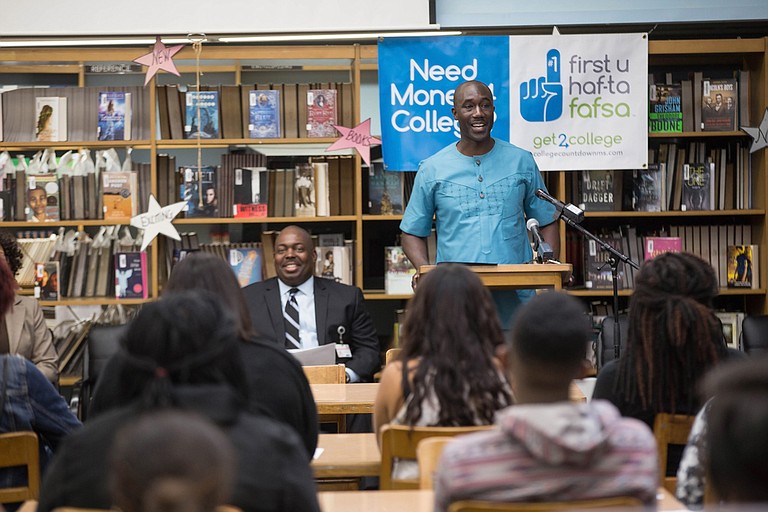 JACKSON — Like millions of high-school seniors nationwide, Murrah High School senior Desmond Jones, 17, is preparing to go to college next fall. Jones is interested in attending the University of Southern Mississippi and, like dozens of his classmates, filled out the FAFSA, or the Free Application for Federal Student Aid, to see if he is eligible for federal financial aid to help him pay for it.

Jones is part of the 25 percent of his graduating class that has already completed the FAFSA. This morning at Murrah High School, Mayor Tony Yarber proclaimed October through May "FAFSA Completion Season" for the City of Jackson in an effort to increase those numbers across the entire school district.

"The completion of the Free Application for Federal Student Aid ... is strongly associated with post-secondary enrollment," Yarber read from the proclamation. "Low-income and first-generation students and students of color have barriers in completing the FAFSA, with more than $3 billion in federal financial aid left unclaimed each year simply because students do not apply."

Jones says the proclamation is important for the help it represents for students. "It pushes the city and overall state to increase more young people to get to college," Jones said about the proclamation.

Using their parents' tax information, students typically fill out the FAFSA using its online form; this year, the federal government made the FAFSA available Oct. 1, instead of Jan. 1, as in previous years, in order to give people more time to fill out the application. Students who complete the FAFSA may be eligible for thousands of dollars of aid in the form of grants, loans and work study programs; for instance, students who qualify for the federal Pell Grant can receive up $5,815 per year to help pay tuition.

"Some parents think it's a credit check, or if you don't file taxes, you can't get it," she told the Jackson Free Press. "I want kids who didn't think they could pay for college to know that they have options," she said.

Get2College, a program operating under parent nonprofit Education Services Foundation, won a $55,000 grant in order to increase the number of completed FAFSA applications in Jackson Public Schools. Get2College, whose staff and volunteers include former admissions counselors, provide families with resources in order to help not just students, but also their parents interested in going back to school. They work statewide with offices in Jackson, Southaven, and Ocean Springs by providing ACT prep, workshops and other types of counseling for those interested in postsecondary education.

"We just want to educate Mississippi, whether it's a certificate or a PhD," Knaus said.

Sierra Mannie is an education reporting fellow at the Jackson Free Press and The Hechinger Report. Email [email protected].