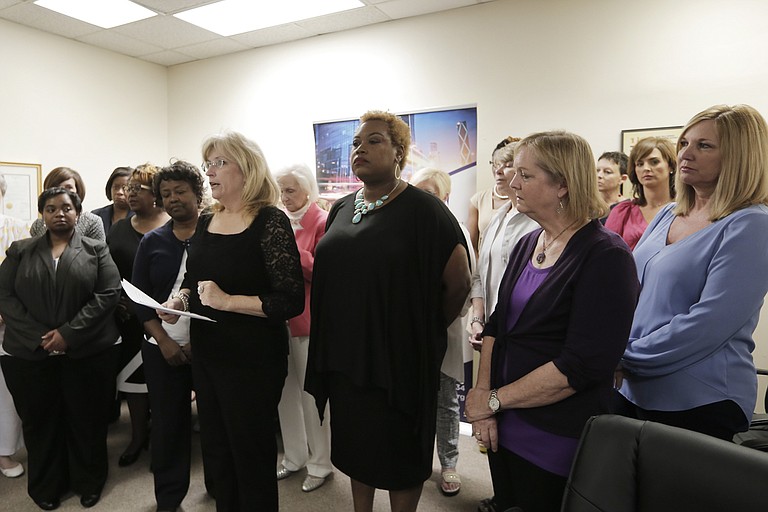 On May 11, the Mississippi Coalition Against Domestic Violence held a press conference to express disappointment on SB 2418's failure. Photo by Imani Khayyam.

More than a dozen domestic violence activists gathered at the Mississippi Coalition Against Domestic Violence headquarters on May 11 in response to the failure of SB 2418, the 'divorce bill' that would have created legal provisions to make domestic violence grounds for divorce in the state.

The bill, authored by Sen. Sally Doty, R-Brookhaven, was recommitted for conference in the Senate, but neither the House nor the Senate brought the bill back to the floor before the 2016 legislative session ended.

Sandra Morrison, MCADV board president, expressed disappointment in the bill's failure, but noted that the coalition plans to educate the public on domestic violence, as well as rework the bill, strengthen the language and reintroduce the bill next session.

Morrison noted that one in three female homicide victims are killed by an intimate partner when separated or initiating divorce. Wendy Mahoney, executive director of MCADV, said that introducing better domestic violence provisions into Mississippi law would allow victims easier access to a divorce. In Mississippi, there's only one domestic-violence provision for divorce, which is "habitual cruel and inhumane treatment."

"Putting in place strong laws to protect victims and strong laws to utilize the justice system as a tool to leave an abusive relationship is one way for our state to support and show victims that they care," Morrison said. "Implementing a strong statute to allow victims of domestic violence to leave an abusive relationship will allow just that, by the support of our state."

"You can't make someone stay married if they don't want to," she said.