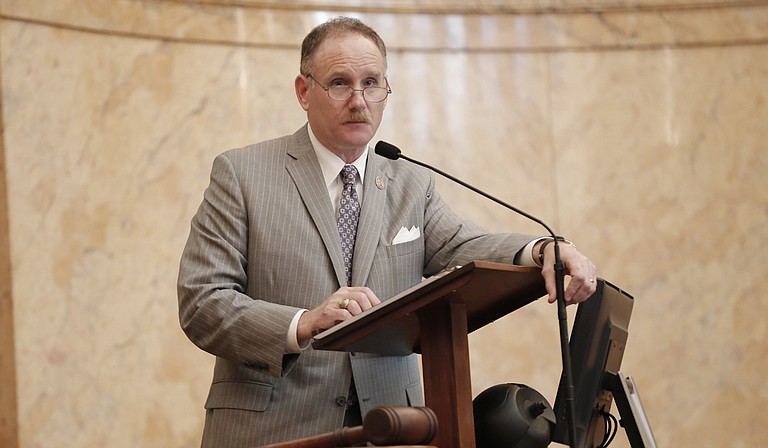 Rep. Mark Baker, R-Brandon, brought the airport bill up on the House floor today, and after over three hours of debate, it passed by a vote of 74-46 and was held on a motion to reconsider. Photo by Imani Khayyam.

JACKSON — Despite a massive filibuster, accusations of a deal gone awry and quoting of Bible verses, the Mississippi House of Representatives today passed the controversial airport “takeover” bill today to give more control of the Jackson airport’s commission to stakeholders outside the city.

The heated debate came in the wake of accusations by several Hinds County Democrats and the House majority whip, Rep. David Baria, D-Bay St. Louis, that House Speaker Phillip Gunn had reneged on a deal not to bring the airport bill to the chamber’s floor for a vote.

Gunn denied to reporters yesterday that he had made a deal, and his office reiterated that response today.

The Clinton Republican told the House that due to Wednesday’s filibuster over the airport bill, during which Democrats demanded that full bills be read to the chamber, the House will likely have to meet over the weekend, costing taxpayers $70,000.

The Jackson airport bill was first on the calendar today, and representatives were ready for a long debate. After Rep. Mark Baker, R-Brandon, briefly explained the bill, Democrats introduced a series of amendments—eight to be exact—which all failed.

Once Baker’s original amendment passed, House Democrats spoke in opposition to the bill for about three hours. Rep. Kimberly Campbell, D-Jackson, spoke against the bill for the first time in her eight years in the House. Campbell called out her fellow representatives for not supporting her in defending local legislation when she had returned the favor in previous years, like defending the closure of the Brookhaven School of Arts.

“Don’t tell me I don’t have the right to have bills read,” Campbell said.

Several Democrats—not just the Jackson delegates—spoke against the bill, but after three hours of debate, the bill passed by a vote of 74-46. Rep. Earle Banks, D-Jackson, held the bill on a motion to reconsider.

House Democrats continued to ask for bills to be read after the airport bill passed, however, and when the House’s automated reading machine started reading the next bill on the House calendar at its highest speed, Banks only had to stand up to protest before the speaker and House clerk staff fixed the machine to read at an understandable pace. Democrats are still asking ask for bills to be read currently as the House remains in session tonight.

How the Filibuster Started

On Wednesday, House Democrats—mainly from Hinds County—were asking for bills to be read, regardless of their content. The House bill reading machine was set at the fastest speed, however, and House Democrats expressed concern that no one could understand the bills as they were read.

Starting to work down the House’s calendar of more than 100 bills, House Insurance Committee Chairman Gary Chism, R-Columbus, decided to not yield for questions on bills early in the day when he hot to Senate Bill 2192, which would give the commissioner of insurance the right to investigate any association that holds a business license.

Rep. Stephen Holland, D-Plantersville, expressed serious concerns over not being able to ask questions, and challenged Speaker Gunn during a parliamentary inquiry. “So that’s just OK, that I don’t have to know (what’s in the bill) because I don’t sit on the insurance committee, and I'll have to figure out myself what’s in the bill?” Holland asked Gunn.

“Every member is charged with the responsibility of reading the bills and preparing themselves to vote,” Gunn responded.

Holland wasn’t satisfied and asked which rule allowed Chism to not answer questions. “State the rule that says that the chairman does not have to answer questions of the general membership so that we can make an intelligent decision on this bill, for the people that we represent,” Holland said.

Gunn said no member is ever required to yield for questions. “That’s been the practice long before I got here and long before you got here,” he told Holland. “It’s nothing unusual or out of the ordinary—there’s no requirement that the gentleman has to yield anywhere in the rules.”

Rep. David Baria, D-Bay St. Louis, spoke on the bill, saying the House found itself in an odd situation because no one will explain bills, saying it’s difficult to keep up.

“I find myself trying to read and keep up, but it’s hard to do that without being able to ask questions, and then we have bills being read that they’re being read so fast that nobody, I mean nobody, in this chamber can understand it,” Baria said.

The bill eventually passed, despite Baria speaking against it, by a vote of 65-54. The tension didn’t ease up throughout the day, however. Hinds County Democrats continued to ask for bills to be read in order to delay the process.

Rep. Kathy Sykes, D-Jackson, said that the House filibuster was about the airport bill. Democrats, specifically from Jackson, were upset that the bill came out of committee the previous day.

“I’m disappointed that the bill came out of the Senate because the House, we killed House Bill 721, which would have changed the makeup of the commission, too,” Sykes said. “We killed that bill—we did due diligence, but on the Senate side, they allowed (it) to come out, and I just hate that more of an effort wasn’t made on the front end to kill it on the Senate (side).”

Restraining Order Against the House Speaker

Beyond legislation, the House minority caucus expressed concern Thursday about their rights as members of the House. In what felt like déja vu from a month ago, when House Democrats asked for an almost 300-page bill to be read out of protest of the Supreme Court redistricting bill (which has since died), House Republicans went into recess right after members came back from lunch on Wednesday.

Speaker Gunn ran down the House calendar, and chairmen asked that their bills be read for the third time, which means by House rules that “no debate shall be allowed unless the motion prevails” on the floor.

The House did take up and pass the Capitol Complex Improvement District bill, but Thursday did not end on a high note.

Rep. John Hines, D-Greenville, spoke on a point of personal privilege at the end of the day, despite asking to speak earlier. He asked (again) that the bill reading machine go at a slower pace. 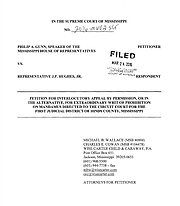 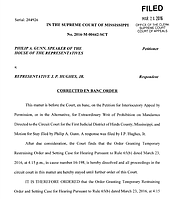 “That stay will permit the House to conduct its business in an expeditious fashion while this Court considers the merits of this petition. When this Court resolves the petition, it should reverse the temporary restraining order and bar the granting of preliminary injunctive relief,” the request says.

The emergency restraining order was lifted tonight, however.

Court documents also say that Gunn believes that the constitutional claim that Hughes seems to be asserting has no merit, but he does not seek “at this point to bar its judicial consideration. He merely seeks emergency relief so that the House may complete its business this session.”

Baria, the House minority whip, released a statement today about Wednesday’s events in the House. He said that the Hinds County delegation was requesting bills to be read because the speaker broke his promise to them that he would kill the Jackson airport bill. Baria’s statement also addressed a botched agreement on the point of personal privilege rule.

The minority whip put full blame at Gunn’s feet. “Unfortunately, his actions have made it much more difficult to work together as trust is such an important factor in conducting the business of the House,” he wrote in the statement.

The House is still in session this evening, and House Democrats are still asking for bills to be read.