I Voted for Sanders Despite the ‘Bernie Bros’ 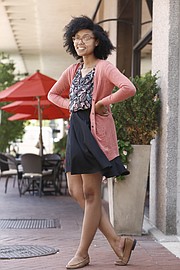 When I was 7, my cousin Luther, then in his 60s, talked to me about the Civil Rights Movement and voter registration, with Columbia, Miss., as our literal and figurative background.

Most of it went over my head, but it was one of those moments that stays with you. "People died so you could vote. Doll (my grandmother), and Buddy (my grandfather), registered people in Columbia. When you get old enough, don't just register to vote. Vote," Luther said.

I promised and, so far, have kept my word.

I take voting very seriously, and I was beyond excited to cast my vote March 8 in Mississippi's primary election. While I was eager that I got to participate in the political process on a national scale, I was not as happy about my options.

Historically, neither party has been great for black people or for women. They make promises that they fail to follow through on, and they make sacrifices at our expense. But, as it's the mainstream political party with whom my own personal ideologies most closely align, I voted for Bernie Sanders in the Democratic primary.

I would love to see a woman president, but I won't vote for Hillary Clinton because she's a woman. She favors whichever issue is in vogue. When Black Lives Matter activists interrupted a Clinton fundraiser, Clinton agreed to speak about her "super-predators" comment, but didn't. After security lead the protester away, Clinton simply said, "OK, back to the issues."

When a young Somali-American woman questioned Clinton on her remarks and policy regarding race and diversity, she said, "Well, why don't you go run for something, then?" In 2004, Clinton said, "I believe marriage is not just a bond, but a sacred bond between a man and a woman."

All of these comments directly contradicted her current pro-black, pro-LGBT platforms. I won't vote for Clinton, because I don't know #WhichHillary I would be voting for.

She performed very well at the debate two nights ago, but it seemed like a performance. I can't hold her accountable for the Bill Clinton presidency of the 1990s as all decisions made were ultimately her husband's, but I can be critical of her "super-predators" comments, her imperialist history, her flip-flopping and her support of her husband's actions.

That said, I'm not entirely sold on Sanders, either. I don't believe that, under a Sanders presidency, the KKK will burn their hoods, hold hands with black and Latino people and sing "Kumbaya." I don't believe that Sanders can immediately end wealth inequality. I don't believe that he will instantly end the war on drugs—especially with our current Congress. I was appalled at Bernie's joke about mental illness at Sunday night's debate. I absolutely disagree with his position to continue the drone program. I think the discussion must move past Clinton's Super PAC.

I don't doubt Sanders' ability to lead, but I do think he needs better speechwriters.

More than Sanders' questionable ideas, I'm sick of Bernie Bros. A popular meme shows a photo of Dr. Martin Luther King Jr. with text that reads: "Let me get this straight. I fought and died for the black vote and now a man who marched with me is going to lose to a girl who opposed me ... because of the black vote?"

This sexist meme reduces black identities and black people to a monolithic "black vote," while distancing itself from the fact that King was assassinated.

With all of my trepidations, I voted for Bernie because I feel, of all the candidates, he is the one who legitimately has my back. He has been consistent in his beliefs and opinions, and he is the only candidate to embrace Black Lives Matters ideas and leaders.

Editorial Assistant Adria Walker likes collecting vinyl and watching films. She enjoys reading the biographies of forgotten or infamous dead people and debating about the political powers behind Gotham city.