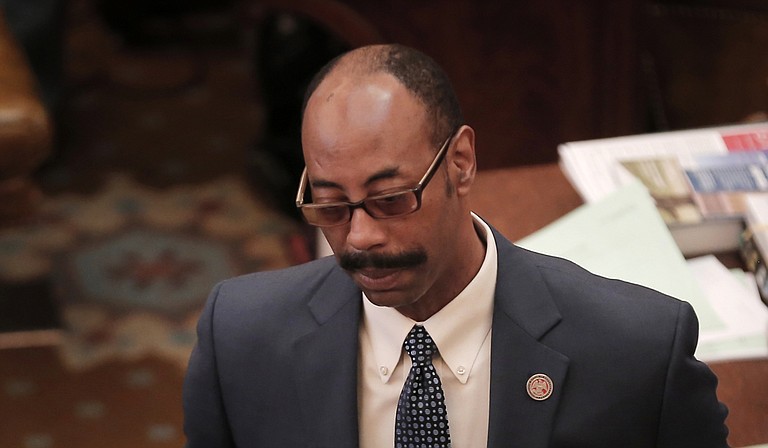 Rep. Gregory Holloway’s HB 4 would grade parents on their involvement in their children’s education in lower-performing school districts. Photo by Imani Khayyam.

The webpages for Senate and House Education Committee legislation resemble a text-heavy graveyard of the bodies of bills snuffed out prematurely. Only 24 Senate education bills survived of the original 109; in the House, 40 are still alive at press time. Here are a few for consideration.

HB 4: A bill to create the Parental Involvement and Accountability Act

One of the few education bills by Democrats to survive, Holloway's bill exists for the purpose of gauging and encouraging a relationship between parents and teachers in lower-performing school districts.

If passed, children's report cards in C, D and F districts would have a "grade" for their parents to reflect the perceived level of parent involvement with the students' education.

HB 958: A bill to prohibit school personnel from engaging in political activity while in performance of school duties

Though House Education Committee Chairman Rep. John Moore, R-Brandon, failed to move his own bill to restrict school personnel politicizing out of committee, Snowden's much less financially oppressive one lives on. (Snowden's would fine offenders $100 for their first offense, then $250 for their second one; Moore's would have imposed a fine of up to $10,000 and the revocation of licenses.)

HB 989: A bill to establish the Mississippi Achievement School District

Schools that have held an "F" rating for two consecutive years would be required to consolidate into a statewide district with a board the governor, lieutenant governor and state superintendent appoint.

Achievement districts see no guaranteed achievement, however; the results in Tennessee, Michigan and Louisiana were lackluster and, according to a 2015 Hechinger Report article, "relied heavily" on charter schools, which Chris Barbic, the Tennessee district's superintendent, says cannot be relied on to fix all in communities still stuck in the cycle of generational poverty.

SB 2494: A bill to require school-district consolidation in Holmes County.

Involuntary consolidation-happy Sen. Gray Tollison, R-Oxford, has managed the passing of this bill, which would combine the Durant Public School District and the Holmes County School District, whether they like it or not. Both districts have spoken out against the consolidation, most vociferously Durant Public Schools, which "firmly opposes" the consolidation, saying that it would not serve the interests of Durant's students. Superintendent Edwin Robinson appeared at the Senate Education Committee to present a 2015 House-assigned report virtually preparing them for consolidation, to the distaste of Durant and Lexington citizens, but in vain; despite the efforts of Sen. David Jordan, D-Greenwood, Tollison would not allow Robinson to speak to oppose the legislation in committee.

The Equal Opportunity for Students with Special Needs Act faces expansion to include students who have had an IEP, or Individualized Education Program, in the last five years instead of the last 18 months. Public school districts draft IEPs for their students who require exceptional education services. The original legislation was controversial at its genesis, as it required parents to enroll their children at non-public schools, thus forfeiting their children's entitlement to a free appropriate public education, or FAPE. Of the nearly 500 scholarships available for awarding in the program's first year, only 131 are in use.

Sierra Mannie is an education reporting fellow for the Jackson Free Press and The Hechinger Report. Read more at jfp.ms/education and follow #msleg education news at jfpdaily.com. Email her at [email protected]