National Re-entry Month, Officer of the Month, Crime Down Across the City 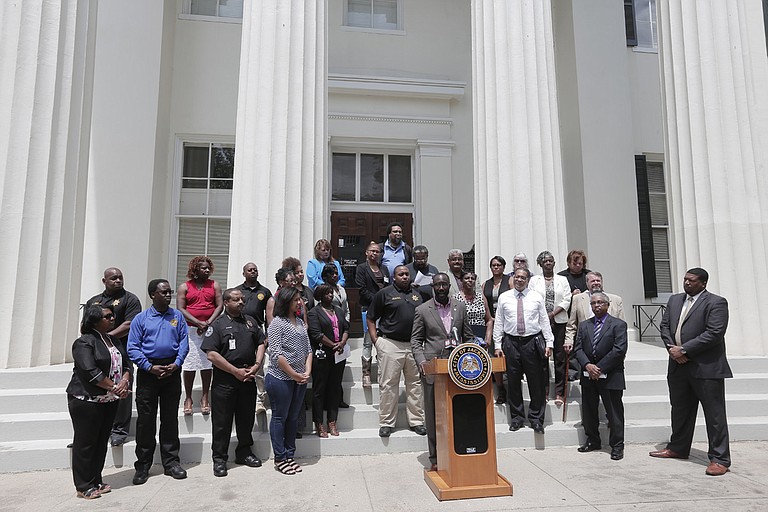 JACKSON — Standing in front of City Hall with representatives from the Jackson Police Department, the Hinds County Sheriff's Department, and members of the Department of Human and Cultural Services and the Fresh Start Task Force, Mayor Tony Yarber declared that the City of Jackson is participating in National Re-entry Month in support of citizens who have been incarcerated and are now returning to society.

The Fresh Start Initiative, launched in 2010, was created to help people with felony convictions find jobs and give them a second chance. Fresh Start staff "conduct individual and panel interviews, check backgrounds and references, and refer to job readiness training to assure that our participants are ready for employment," their webpage states. Fifty members from varying departments in the justice system make up the Fresh Start Task Force.

"As we make this declaration, we're serious in the City of Jackson about seeing our men and women who have made the conscious decision that crime is not the way of life that they want to pursue, that they want to make rehabilitation a part of their testimony. We want to give them an opportunity to do that, and Fresh Start is the City of Jackson's way of doing that," Yarber said.

"I think everybody that looks at the situation holistically realizes that we are not going to be able to build a jail cell for everybody that offends," said Jackson Police Chief Lee Vance. "We must look for other opportunities for individuals like this to turn their life around. This is crime prevention in its purest form."

LaShetta Wilder, the re-entry coordinator for the Mississippi Department of Corrections, thanked the mayor, and she said that MDOC would like to continue to work with the City to lower Mississippi's 33-percent recidivism rate and provide resources for citizens.

"One of the most difficult parts of coming into the criminal-justice system is the journey after being released (by) MDOC," Wilder said. "MDOC would like to continue to work together with the City of Jackson and other agencies to make this journey a success for our returning citizens."

Officer of the Month

Jackson Police Officer Anthony Veasey was named Officer of the Month for April, due to the arrest of Marcus Lawson, who was one of three men suspected of robbing a Dollar General store in west Jackson this past October.

The JPD SWAT Team, along with DART and the Robbery/Homicide Division, began an intense search for Lawson. In February, JPD assembled an armed-robbery detail to find offenders wanted for felony crimes, and after securing a search warrant, JPD went to Lawson's girlfriend's home.