Working to ‘Do Something Different’ 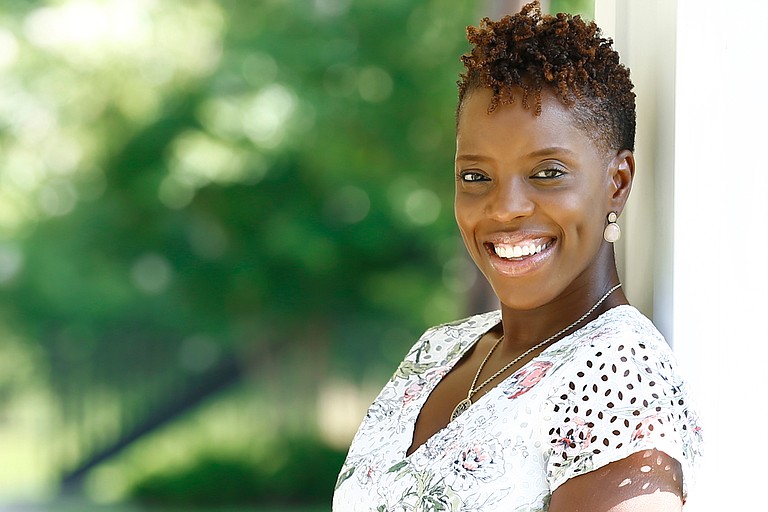 Aisha Nyandoro is the executive director of Springboard to Opportunities, which works within some subsidized housing communities in the Jackson area and started three years ago. One of her goals is interrupting the cycle of poverty. Photo by Imani Khayyam.

JACKSON — "Now we can better take care of ourselves."

Those are the words that Valeria Haley's son told her when she landed a job after 14 years without employment. Aisha Nyandoro and other Springboard to Opportunities staff approached Haley, a mother of three, who had not worked since having her first child at the age of 24, about working for the organization.

Now three months into her new job, Haley says it is nothing short of a blessing. As a community specialist associate, Haley works with new residents who move into the affordable-housing complex that she and her family still live in.

"I'm living proof to motivate them to do something different," she says. "I hadn't worked in 14 years, and if they want to do different, they can."

Haley and her family were living in what she calls "barely making it" conditions when she was raising her family. She was living in what is now one of the communities Springboard works in, called the Commonwealth Village community, even before Springboard showed up. While she was raising her family, Haley relied on food stamps and government assistance to help raise her children and keep her family going. She says eventually (and after Springboard came to her community) her attitude shifted from one of resenting authority to one of patience. In the past, Haley had to focus much more on keeping the lights on, even while she was living in other subsidized housing communities.

"The only thing I was focused on was keeping my apartment," Haley said.

Beating poverty is not as simple as getting a job, however, and Haley understands that because as soon as she got a job, her new income meant less government assistance. She now no longer receives food stamps or has her mother help her financially. She is able to pay her utilities and her rent with no help, but her kids still receive some assistance. She said she is working to get to the point where she can walk into the welfare office and happily ask them to cut her family off, too.

"Once I can say I can check that off my to-do list, I am progressing in life," she said. "(With my job) I can be a better mom for my kids."

Since she started work, Haley says she feels as though she has grown, metaphorically speaking, and she has seen other members of her family recently land jobs of their own. Now Haley's goal is to get her management degree, and some day she hopes to work for Mississippi Public Broadcasting.

Mississippi was ranked 50th in overall child welfare this year, and while that rank could be linked to several systemic issues, poverty is an underlying factor, state experts say. Thirty-two percent of the state's children under age 5 are in poverty, the 2016 Kids Count report shows. Being born into poverty is more than just an income threshold to meet for benefits, however.

Being at or below the poverty line comes with potential help from food stamps to subsidized housing, which are the communities that Springboard to Opportunities works in, in Jackson.

Nyandoro, the program's executive director, said that the system of poverty is complicated with several pieces. Nyandoro said it is possible for families move out from Section 8 housing but not be out of poverty yet—just at a different level than they were previously.

Springboard to Opportunities works within six subsidized housing communities in Jackson, and Nyandoro said part of what makes the system so complicated is the intersection of so many programs, from food and childcare vouchers to subsidized rent and children on Medicare.

Jobs, while typically seen as the magic wand to relieve families in poverty, do not always fix a situation, Nyandoro said, because she said jobs that pay a living wage are needed as well as educational opportunities for families.

Nyandoro said that getting jobs for families is important but she said one of the biggest myths about families she works with is that they are unemployed, when in reality, most of them are employed, she said.

"One of the biggest lies about families that live in affordable housing is that these families are just milking the system and not working—most of the families that we work with are working, or there's been a serious desire to work, and by virtue of circumstance, they are unable to due to lack of transportation, childcare or education or all of the above," she said.

Springboard to Opportunities turned three years old in June. Nyandoro said she is amazed by the grit and fortitude of the families.

"I admire the women that we work with, they are the hardest-working and fastidious folks that I've ever worked with," she said.

Poverty is also generational and a multi-symptomatic state of existence, complicated by the multiple intersecting systems poor families must navigate from federal funding for food or subsidized housing applications to childcare vouchers—and over half the counties in Mississippi are persistently poor.

Corey Wiggins, director of the Hope Policy Institute, said that "persistently poor" is a technical term that applies to counties where the poverty rate has exceeded 20 percent for the past 30 years. Mississippi and Louisiana are the only two states where over half of counties (or parishes) are considered persistently poor.

Wiggins says that recognizing these communities as persistently poor is important to get at the relationship around other factors like education, healthcare and economic security, and how deep a lack of any of those factors has the potential to hurt.

"Entrenched poverty has on so many other factors, when you start to think about issues like education, healthcare and economic security, all those issues are closely linked and connected," Wiggins told the Jackson Free Press.

The way out of poverty, many are told, is through work. Wiggins said that while there is a focus, state development-wise, on bringing more jobs to Mississippi, policy that keeps the needs of working mothers and families in mind is often left by the way side.

"Do we design our workforce programs and training programs in a way to make it inclusive so that single mothers can participate?" he said.

"We're talking about things like making sure mothers have access to childcare, which is a barrier to keep people in a place (of work)."

Policy that focuses on mothers having access to childcare would ensure they can not only participate in workforce trainings but also keep a job in the first place, Wiggins said.

In looking at policy as an intervention, Wiggins says that tax cuts, such as the Taxpayer Pay Raise Act which passed in the 2016 legislative session, need to be considered in the context of the state's current economy, when other budgets  like public education and healthcare are being cut.