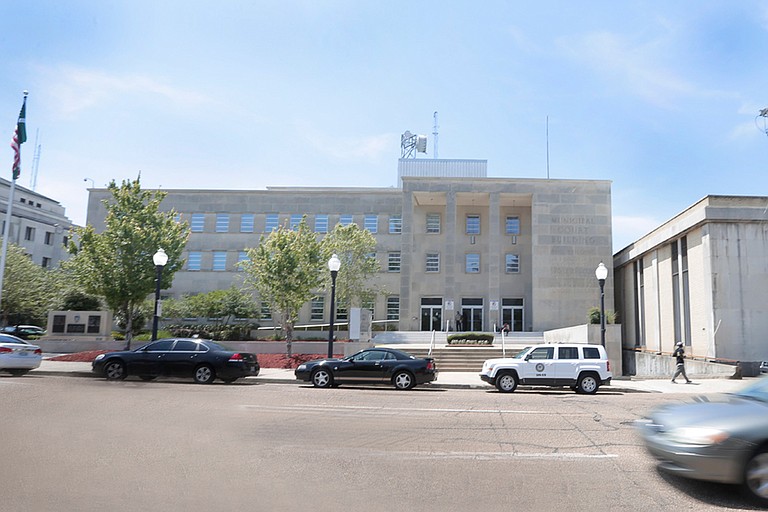 With the end of misdemeanor bonding in Jackson’s Municipal Court, bonding agents who depended on the income may fade away. Photo by Imani Khayyam.

JACKSON — The settlement between the City of Jackson and a number of poor citizens recently dismantled not just the "pay or stay" policy of the Municipal Court but also the practice of requiring bail bonding for misdemeanor offenses.

Local bonds agents are arguably the hardest hit, financially, by the settlement. As a result of their concerns, they filed a motion to intervene in the Southern District U.S. Federal Court. 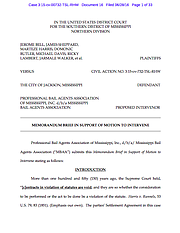 Gene Newman, a current board member and past president of the Mississippi Bail Agents Association, or MBAA, said this could mean a loss of hundreds of thousands of dollars in lost business for the more than 100 bail agents in Jackson.

"It's going to hurt some people, but that's just the way it seems to be right now with these lawsuits going on," Newman said. He was referring to, as the MBAA outlined in its motion, the national campaign of lawsuits by Washington, D.C., nonprofit Equality Justice Under Law, filed as far away as California and as near as Biloxi.

Under Mississippi statute, bail agents charge either 10 percent of the total bond determined by the judge, or $100, whichever is more. Then, the idea is that because a person paid a bond agent, who then has to put up a larger sum, that the bail agent retrieves the individual for the court if they do not show.

That money paid by the accused, who is still assumed innocent at that point, is never returned, and if the accused appears for court as they are supposed to, the $100 or 10 percent, whichever is more, goes straight to the bail agent's pocket. And this was the practice for every single misdemeanor offense, not just felony crimes.

Equality Justice Under Law co-founder and one of the attorneys in the Jackson "pay or stay" lawsuit Alec Karakatsanis explained in a phone interview that the lawsuits have not necessarily taken into consideration the survival of the bail agents. Instead, they argue that the practice of bonding for misdemeanors takes away the basic human rights of the individual, placing them in a "cage" for being poor.

"These cases are about creating policies that don't waste taxpayer resources and needlessly devastate poor people and community," Karakatsanis said. "They are not about the bail-bond industry."

The Jackson lawsuit is named for Jerome Bell, who lived on a disability check. Because he wasn't able to pay his fines, the 58-year-old man had to sleep on a concrete floor for 20 days. For those people living on very constrained budgets, like Bell, paying a bonding agent before paying the court puts them on a straight track to sitting in jail, with no ability to address the fine while they are incarcerated.

"Keep in mind that these are all people who have been deemed eligible for release. And the only thing stopping them from being released is the payment of money," Karakatsanis said. "That's a really serious human and civil-rights problem for a society to confront."

'They Got the Money'

Newman may have a vested interest in the bonding business, but he also argues that misdemeanor bonding is essential to the criminal system, in Jackson in particular.

"(The) criminal-justice system has always been a pay-by-the-user system," Newman said. "You think Jackson is a war zone right now, just hang on. It's going be like Detroit real quick."

Newman said that during his 39 years of bonding experience, the City always adapted to the needs of the poor.

To Newman, misdemeanor offenders simply choose not to pay their fines.

When asked about the defendants in the Jackson lawsuit, most of whom were on some form of disability, Newman rejected the idea that they were unable to pay their fines. "No, no, no," he said. "That's bull crap. They got the money. They just don't want to pay the money. The crap about they ain't got the money, that's never been true."

Newman said most of the people affected by the "pay or stay" decision choose to spend it on other things.

"They want to buy cell phones and have $400 shoes," he said. "They always have the money to get out."

'I Side with the Poor People'

The City of Jackson seems to disagree with those blanket statements, since it joined other cities in settling the case against Bell and the others, agreeing to pay a combined settlement amount over $120,000 as well as abolishing the practices. And that agreement is something that the motion to intervene wishes to address, although by filing it, the MBAA has not, at the moment, affected the outcome of the lawsuit and settlement.

Cliff Johnson of the MacArthur Justice Center at the University of Mississippi School of Law worked hand-in-hand with Equality Justice Under Law in the Jackson lawsuit.

"You never take joy and find happiness in the demise of someone's business or ability to provide for their family," Johnson said.

"However, to the extent that that is the result of ending an unconstitutional practice that has victimized the poor people in Mississippi, then on balance, I side with the poor people."

Because of that, Johnson and Karakatsanis will continue to pursue the case as the bail bonding association attempts to make its argument to intervene.

"The notion of trying to save the bail-bonding industry because of the financial problems that these people are facing is of no interest to me," Johnson said.

Because we have allowed it to be a means of controlling and threatening and, in many instances, incarcerating vulnerable, poor citizens unnecessarily and illegally."

Johnson said that even though that the abolition of municipal bonding will mean the end of a cottage industry in Jackson, enough to support more than 100 such firms, it was worth it for the protection of the constitutional rights of the poor.

"It sounds crass to say, 'I don't care what happens to those people,' and I wouldn't say that, but if the bail industry is built on and depends on impositions of bail in every misdemeanor case then it needs to end," Johnson said.