The Mystery of a $56-million Mistake 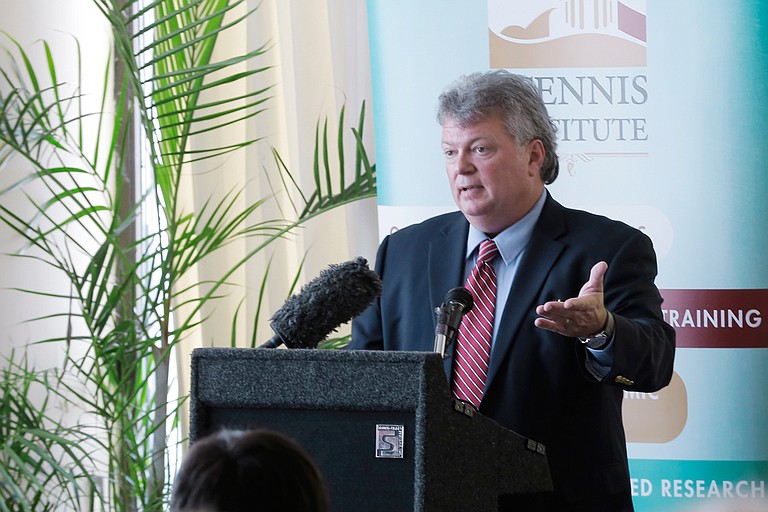 Attorney General Jim Hood predicted at least a $120-million budget hole in the state’s fiscal-year 2017 budget, due to the “staff error” that left a $56-million hole combined with funds swept away by Senate Bill 2362. Photo by Imani Khayyam.

Not everyone agrees on that figure, but after the 2016 legislative session, state leaders admitted to a $56.8-million shortfall in the current year's budget due to a "staff error," saying they over-estimated how much money the state could collect.

Hood said last week that in his estimates, the other $89-million deficit comes from the effects of Senate Bill 2362, which turned several state agencies into general-fund agencies—not special-fund agencies. Additionally, the bill prohibits state agencies from paying one another for services.

"They anticipated the fees agencies usually charge, (and) they didn't cut that out because they forgot we weren't going to receive that revenue," Hood said at the Stennis Capitol Press Forum last week.

In a joint press statement issued in May, Lt. Gov. Tate Reeves and House Speaker Philip Gunn said they anticipated unallocated balances in the rainy day fund, capital expense fund and budget contingency fund of $490 million. The rainy day fund had a $349-million balance before Department of Revenue officials recommended that Gov. Bryant withdraw $63.1 million from that fund on the last day of fiscal-year 2016, the Associated Press reported.

"Unless revenues outperform expectations during the first six months of the next fiscal year, this anticipated shortfall will be addressed during the 2017 legislative session," the May statement said.

Hood told reporters last week there's an exception in Senate Bill 2362: trust funds are exempt from the new law, partially at least. Hood's office took the liberty of calculating which trust funds the law left untouched and found that money that is currently in most of those funds can be spent until it's gone.

On the other hand, no new money will be going to most of those funds, Hood's spokeswoman Rachael Ring said in an emailed statement to the Jackson Free Press, because the Legislature diverted assessments on criminal convictions and other sources to the state general fund. Hood said these funds cannot be transferred into his agency's trust fund any longer. The state's workers comp-trust fund is on the list well.

After the special session Lt. Gov. Reeves addressed the trust-fund issues and said that they specifically exempted the trust funds from Senate Bill 2362. He told reporters that the 2017 budget is built on the assumption that there will be no revenue growth—but said that growth is possible. Reeves said leaders would figure out what to do for fiscal-year 2017's budget in January when the Legislature is back in session.

"Whether or not we're going to have an issue in FY17, nobody knows, because we are going to determine revenue growth and see if revenue grows," Reeves told reporters after the special session in late June.

"It takes $7 million to run (the PSC), but now the tax commissioner doesn't have the authority to collect that money because they won't be spending special funds," Hood said at the Stennis Press Forum last week.

Hood asked why state leaders needed to pass the "Mississippi Budget and Transparency Simplification Act of 2016" so quickly in the past session instead of studying the issue first.

"The reason they rushed it was because of the huge deficit they had," he said last week. "Our revenues are down because of tax cuts we've given to corporations."

As of April, corporate (or franchise) tax cuts taken in the last four fiscal years have cost the state $51.7 million, Department of Revenue data show.

All of the tax cuts enacted by the Legislature since 2012 have cost the state $140.9 million in general-fund revenue.

At the end of the session, House Speaker Philip Gunn, a Clinton Republican, said he planned to personally chair a committee to study the state's tax structure and reform as well as investigate the expenditures of state agencies. So far, the committee has not met, although Gunn and Reeves will host a press conference on Thursday to announce efforts towards tax reform. Hood blamed the corporate tax cuts for the state's current budget crisis.

"The whole problem with this budget issue has been a miscalculation by trying to grant these huge corporate tax cuts which are catering to those who can make huge campaign contributions, to be frank about it, so we've got to change direction," he said last week.

When asked about budget deficits facing the fiscal-year 2017, Lt. Gov. Reeves' spokeswoman said the Legislature appropriates according to expected costs.

"Each year, the Legislature appropriates for state agencies according to estimated expected costs," Laura Hipp, Reeves' spokeswoman, said. "A small few incur legitimate budget deficits due to unexpected costs caused by variables impossible to estimate, such as the number of insured in Medicaid or variable interest rates causing Debt Service to fluctuate. There should not be deficits caused because agencies fail to follow the laws passed by the Legislature, and if there are, I wouldn't expect those deficits to get funded."

Beyond the effects of Senate Bill 2362 and the $56-million mistake, Democratic lawmakers warned of the hazardous effects of tax cuts on state agency budgets throughout the 2016 legislative session. Often times, states like Louisiana and Oklahoma came up as examples of state budgets gone awry—deep into debt holes.

In other states, tax cuts have led to tax hikes or deep budget cuts—or both. In Louisiana, Gov. John Bel Edwards was forced to propose an $836-million tax hike to fix the $943-million budget deficit, the Times Picayune reported. Louisiana's budget, however, is much larger than Mississippi's. Its fiscal-year 2017 budget is set at $24.5 billion. Mississippi has a $6.4-billion budget.

In Oklahoma, budget cuts have reduced the size of government agencies significantly. The Oklahoman reported that the total number of state employees dropped from 34,569 to 33,960 this year.

Students recently walked out of public schools in May to protest budget cuts that led to cutting teacher roles there, and yet the Oklahoman's editorial board points out that education funding has gone up by over $1 billion in the state in seven years.

Mississippi similarly saw cuts to the mental health and health departments for fiscal-year 2017, due in part to the legislative leadership prioritizing education (level) funding over other agencies.

"One priority was that the leadership did not want to cut the MAEP (Mississippi Adequate Education Formula) formula so we did not cut it," former Rep. Herb Frierson, R-Poplarville, who is now the state commissioner of revenue, told the House during the special session in June. "That's a huge amount of money, and we had to make adjustments there."

At the close of the 2016 legislative session back in April, Speaker Gunn told reporters that our sister states have had to dip into their rainy-day funds and put them in a real financial bind but that Mississippi was set with money in the bank.

"The fact that we are not in a hole is reflective of good, responsible government," he said on the last day of the regular legislative session. Gunn also stressed that he and his counterparts were not going to apologize for having conservative fiscal values.

Attorney General Hood said Senate Bill 2362 is not a partisan issue, pointing to public statements made by both Secretary of State Delbert Hosemann and Insurance Commissioner Mike Chaney.

Both state leaders asked Hood's office for official opinions on how the bill would affect their office's operations. Hood said the Department of Finance will follow his office's opinions on the matter.

"Hopefully, they (agencies) hobble through to save face until January," he told reporters last week. "They need to come back and fix it then, I don't know where the revenue is going to come."

Update: This story has been updated to reflect that House Speaker Philip Gunn and Lt. Gov. Tate Reeves will hold a press conference on Thursday to announce plans to study budget and tax reform.