Fear and Reality in ‘Virginia Woolf’ 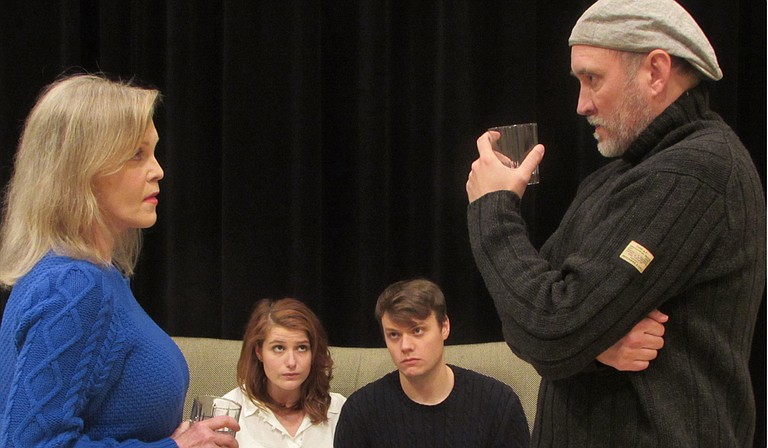 After a university faculty party, married couple George and Martha invite a younger couple, Nick and Honey, to their house for a drink. The night quickly goes south as George and Martha reveal the true nature of their rocky marriage.

While Edward Albee's "Who's Afraid of Virginia Woolf?" was lauded as too controversial in its day (it didn't win a Pulitzer because of its profanity and sexual themes), people saw it as an insight into true American life. The original production ran from 1962 to 1964. New Stage Theatre in Jackson opened on Jan. 20, 1966, with a production of the play. To celebrate the company's 50th season this year, New Stage will perform the play again starting on Jan. 26, 2016, a date that's close to the original performance.

Francine Thomas Reynolds, New Stage's artistic director since 2007, acknowledges that the play is a heavy load for the actors because of the sheer quantity of dialogue, as well as the "realness" of its portrayal of a contentious marriage. A personal connection to the play informs her desire to do the play justice, she says.

During her time in graduate school at Florida Atlantic University, Reynolds worked as the classroom assistant for Albee during the semester he taught at the school in 1987. From working for him, she understands how particular he is about his productions. He closely monitors what companies produce his plays and ensures that they stick to the script he sanctioned to be produced.

For New Stage's production, Reynolds says she wants to dig in deep and "really get these actors working with each other." She hesitates to give away any of the secrets prior to the performances but says that audiences can expect an intense drama that is also sometimes funny.

"It's just stunning the way it lays everything (about the marriage) out on the table," she says.

Because of the intensity and raw emotions conveyed, Reynolds says she needs to be comfortable with who is in the play, and the actors also need to be comfortable with each other. In this run, the four actors began rehearsals via Skype weeks in advance so that they could start that process. In addition to connecting with the characters, the actors and Reynolds are reconnecting with each other: Cullen Douglas, in the role of George, is an alumni of New Stage's Professional Acting Intern Program and has worked with Reynolds before. He returns to Jackson for this show from Los Angeles, where he currently works on ABC's "Scandal" and appeared recently on "Marvel's Agents of S.H.I.E.L.D.," among other television shows.

Reynolds says she is excited to bring the four actors together for the production, but she's equally thrilled about the celebration of New Stage's birthday during it.

During the play's run, New Stage will host an open-to-the-public seminar with Dr. David Crespy, president of the Edward Albee Society, at 6:30 p.m. on Jan. 29 in the theater's Hewes Room before that evening's show. He will present on the history between Albee and the Pulitzer Prize that "Who's Afraid of Virginia Woolf?" was supposed to receive in 1963.

Reynolds says she marvels at the fact that New Stage produced a play that was considered so scandalous at the time here in Mississippi in the 1960s. The script has been updated a little bit since its initial run in 1966, but Reynolds says the realities of the relationship within the play still resonate.

"I think what's important is what has to happen for these two people (George and Martha) to survive," she says. "They have to break through an illusion they've created. It's important that things get said, and you don't live your life through illusion. That's the takeaway: the way we survive in the world and the falseness that we sometimes portray—it's important for that to be broken through."

"Who's Afraid of Virginia Woolf?" runs Jan. 26 through Feb. 7 at New Stage Theatre (1100 Carlisle St.). Curtain time for performances on Tuesday through Saturday is 7:30 p.m., and Sunday is 2 p.m. For more information, visit newstagetheatre.com.