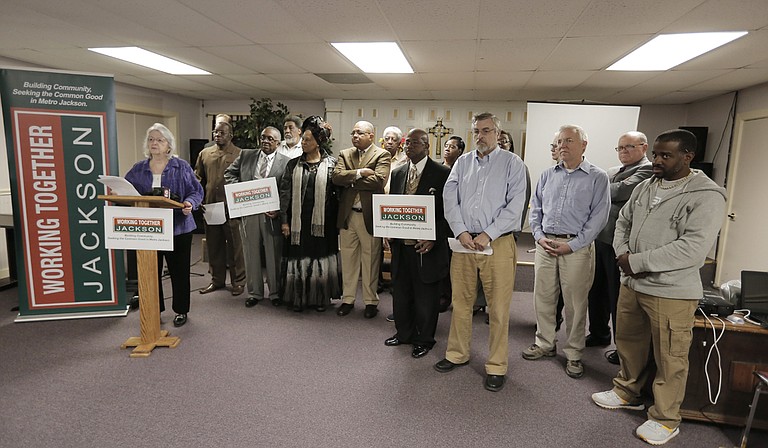 Working Together Jackson board members spoke out against the airport “takeover” bill on Feb. 17. Photo by Imani Khayyam.

The opposition to the Jackson airport "takeover" bill strengthened this week even as a Senate committee passed it to the floor Tuesday despite warnings from state airport leaders that the effort could run afoul of state ethics laws.

The Senate Accountability, Efficiency and Transparency Committee passed the bill authored by Sen. Josh Harkins, R-Flowood, to create a nine-member commissioner board to replace the current Jackson airport board. Harkins said his bill is just taking a regionalization approach to improve the airport with the input of several different mayors and other agencies.

"This makes common sense and is about maximizing the effect because that is a major economic driver for our state," Harkins told the committee Tuesday. "And all I am trying to do is take a regional approach to it."

The Mississippi Airports Association, City of Jackson officials, community members and several local groups have come out against the bill, and Sen. David Blount, D-Jackson, spoke against it Tuesday, calling it a "control" move on the part of legislators from outside Jackson.

Blount told the committee that Senate Bill 2162 is not just a fight between Jackson and Rankin but is also a statewide issue. He read part of a Feb. 18, 2016, letter from Mississippi Airports Association letter to Sen. Harkins that warns that a "legislative dissolution of JMAA may result in required Federal Aviation Administration-issued operating permit ... be put in limbo, or worse, in jeopardy." In other words, the FAA could close the airport as legal battles drag on.

Writing for the MAA, President Cliff Nash of the Tupelo Regional Airport warned that Harkins' bill would bring on a governance battle much like what has happened in Charlotte, N.C., where millions of dollars have been spent on litigation after a new authority took over the city's governance powers. Representatives from Tupelo, Oxford and Hattiesburg airports are part of the airports association that signed the letter.

"Loss of operating certificate for JAN would be harmful not only to the metropolitan Jackson area," Nash wrote to Harkins, "but to the entire state."

On behalf of the MAA, Nash also warned against potential conflicts of interest by board appointees the bill proposes, especially with Mississippi Development Authority as part of the equation.

"By appointing the Adjutant General and the Executive Director of MDA (or his designee) to the board of an authority that governs a specific airport, the statute may create a natural prejudice in favor of that airport for future economic or air service development projects, and a prejudice against the other airports in the state. ... Likewise, these appointments may create problematic relationships under Mississippi's ethics laws."

At the committee meeting Tuesday, CEO Carl Newman, who has only been at the airport for a little over a year, said the airport is on firm financial footing and that the airport's board will vote on a new strategic plan on Feb. 29. The plan will change the look and feel of the current airport, Newman said. "I ask that you consider forming a study group to look at not only our airport but airports across the state," he told the committee.

Newman said that group could include members from MDA and other agencies listed in Harkins' bill as the new representatives of the airport authority.

Blount said the real matter of dispute is two-fold: to bring back a low-cost carrier to the airport and economic development around it. "I have never seen an issue this visceral with my constituents as this bill, but ultimately this is about control," Blount said.

The City of Jackson bought and owns the land that the Jackson airport sits on, but Harkins said the Mississippi Department of Transportation has put $4 million into the airport. "The City of Jackson currently does not spend any funds or services on the airport," Harkins told the committee. "At the end of the day, they are not providing any services, but we aren't taking any of the revenue away from the city."

At a Jackson City Council Planning Committee Monday, Councilmen Ashby Foote, of Ward 1, and De'Keither Stamps, of Ward 4, hinted that the city may start consider annexing more land around the airport and start charging rent on property it owns off Lakeland Drive.

Barely half an hour before the bill passed in Senate committee Tuesday, JMAA Commissioner Vernon W. Hartley, Sr. spoke to the Jackson City Council, lauding the airport's CEO and positive budget. "We are on the right track, and we are doing well," he said. "And we have a fight against us. Overall, your airport and Hawkins Field are in the best condition they have been in years."

He cautioned the council to stay vigilant in their opposition to the legislation. "The city is being subjected to extreme outside forces like never before," Hartley said.

Several other groups have been meeting over the last week to discuss the issue. Last weekend, the People's Assembly and the Malcolm X Grassroots Movement heard presentations on the situation, including one from JMAA Chair Dr. Rosie L. T. Pridget. In her presentation slides, she pointed out some of the more compelling financial facts surrounding the airport. For instance, the JMAA awarded over $10.9 million in contracts in 2015, with $5.2 million of that to Jackson-based businesses.

"The Board of Commissioners, unanimously, opposes any and all efforts to take over the Jackson-Medgar Evers International Airport," she said in the presentation.

Another group, Working Together Jackson, assembled Feb. 17 to address the airport as representatives of more than 40 religious and nonprofit organizations.

"We are more than just the 18 standing here," Bishop Ronnie Crudup of New Horizon Church International said during the meeting at the Open Door Mennonite Church. "We represent congregations and groups from all across the city and metro area. So we are standing for tens of thousands of people. These people are greatly concerned with what they think is a power grab."

"We request that before considering any legislation regarding this issue," board member Dorothy Triplett said, "the members of the Mississippi Legislature engage in civil discourse with the City of Jackson, the JMAA, the Board of Commissioners, other surrounding counties and municipalities, and including representatives of the business community and civic bodies ... about possible ways to address the airport issues and other issues of regional concern."

"All of the stockholders need to be consulted," board member Pastor Horace McMillon of Open Door Mennonite Church said. "And so rather than the state moving unilaterally to make these changes we feel that everyone needs to be consulted. And that it needs to be a part of the process."

McMillon said that some "informal conversations" have been taking place between the group and legislators.

"We really need to slow the process down. There is not a rush to get this done. We really want to encourage the legislators to slow down, back up," McMillon said.

Read more stories about the Jackson airport "takeover" at jfp.ms/airport.