FFT Reinvents, BancorpSouth Renovates and At Home Comes to Jackson 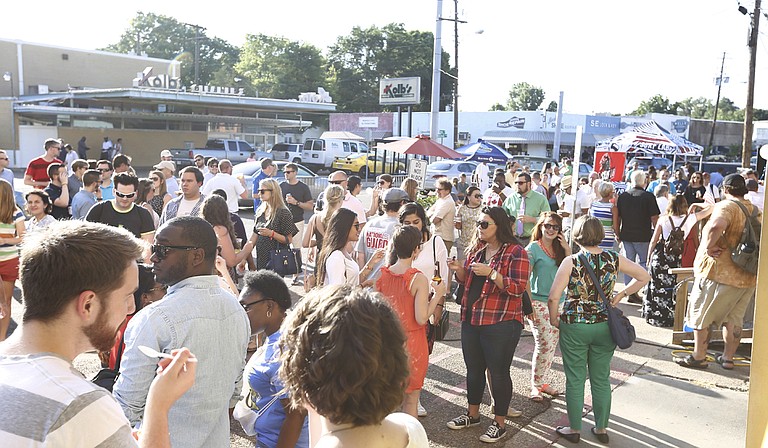 Fondren's First Thursday, a popular monthly event in Jackson, has been reinvented this year to be better than ever before. Photo by Imani Khayyam.

Ron Chane, the owner of Studio Chane, Swell-o-Phonic and The Wonder Lab, and the founder of Fondren's First Thursday, posted a message on his Facebook page on Dec. 4, 2015, that left many Jacksonians wondering about the fate of the monthly event, writing that "fft as you know it" had taken its final bow. Chane says now that he did not mean that the popular Jackson event was ending, but rather that it was being reinvented.

"When I posted that message, I had just finished up running FFT for two years as a one-man show," Chane told the Jackson Free Press. "It got to be where the load (of managing the event) was too heavy for one person to bear. So yes, the way it was done before is done, and FFT is reviving this year as a stronger, more Fondren- and community-focused event that also emphasizes the local arts scene."

Instead of pulling all the strings and making all the decisions himself, as he has done for previous FFT events, Chane is splitting the neighborhood into four zones and letting participating businesses decide what will happen at their doors on event night. He hopes this move will allow the event to be more creative than he could make it on his own while also taking some of the pressure off himself in terms of booking live music, which Fondren business owners will also arrange for themselves.

"Merchants will be solely deciding on the music, but they'll still honor the guidelines of keeping it clean and rotating among different musicians and genres to give opportunities to everyone," Chane said.

Though many of his big ideas for the revamped FFT are still in the design phase and not being announced publicly yet, he promises the return of Recplex, a Jackson State University sports program that brought a dodgeball competition and a life-sized game of battleship to the event last year.

The new FFT will have a greater focus on theater and performers, with live art demonstrations and filmmakers projecting on buildings, as well as an emphasis on local craft beer and food. Chane plans to have all of Duling Avenue devoted to hosting craft-beer makers, music and pop-up activities. Chane is working with Lauren Davis, president of event sponsor Mississippi Food Truck Association, to bring in area food trucks and provide a street-dining experience Jacksonians have never seen before.

"I never want FFT to be classified as just a carnival, festival or street fair," Chane said. "This is a forward and out-of-the-box event. I learned a lot in 2014 when I did the rebranding (from Fondren After Five to Fondren's First Thursday), and I learned even more last year. This is all about taking what I've learned and making that experience benefit the community."

BancorpSouth is conducting a large-scale renovation of its facility at 2710 N. State St., which the company refers to as the Medical Center branch due to its proximity to the University of Mississippi Medical Center. BancorpSouth will carry out the project, which involves completely tearing down the existing facility to build a new, larger one in its place, in two phases over the coming months.

While the current BancorpSouth building is being torn down, all of its operations will be moved to an adjacent building that once housed Sun Gallery Tanning Studio. The bank purchased the Sun Gallery building, along with another adjacent building that once housed a retail shop and insurance agency, in 2015. Demolition on the current BancorpSouth building began Saturday, Feb. 6, and the temporary location opened Monday, Feb. 8. Drive-through and night-drop services are not available at the temporary facility, but normal banking hours and other services remain the same.

The new facility will encompass the space of both the former bank building and the former retail building. When construction is finished, and the new location resumes services, BancorpSouth will tear down the Sun Gallery building to make way for an expanded parking lot.

"This new facility we're building will have all the services our customers enjoyed in the old building and more," BancorpSouth President Brad Maley told the Jackson Free Press. "In addition to a new upstairs level with more facilities, the renovations will ultimately provide improved customer accessibility and flow with far more parking and a greater number of drive-thru lanes."

The company has not yet set a specific date for construction to finish and service to begin in the renovated facility. For more information, call BancorpSouth at 601-968-1545.

Home decor chain At Home is preparing to open a new location on County Line Road inside what was formerly a Sam's Club (6360 Ridgewood Court Drive). At Home plans to have construction on the 128,000-square-foot facility finished by May 2016.

Based out of Plano, Texas, the business acquired the former Sam's Club building in November 2015. The new location will feature an inventory of 50,000 different items including everything from interior and patio furniture to wall decor, kitchen and dining decor, and bed and bath items. At Home has two other locations in Mississippi in Gulfport and Hattiesburg.

At Home will hire a total of 25 people to work at the County Line Road location. Three positions—store director, customer service manager and operations manager—will be full time, while the other 22 will be part-time. At Home plans to hold a ribbon cutting at the store's grand opening and offer in-store gift-card giveaways on opening day.