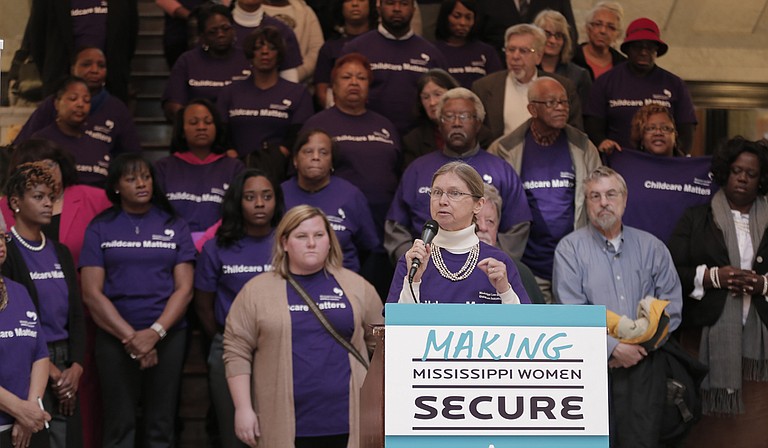 Carol Burnett, executive director of the Mississippi Low Income Child Care Initiative, is calling on the state to make changes to the state's child-care system. Photo by Imani Khayyam.

The Mississippi Department of Human Services administers the federal block grant, the Child Care and Development Fund, but the U.S. Commission on Civil Rights found that the agency's policies could be hurting single parents' chances at accessing grant money to help pay for child care. Currently, the state requires that single parents initiate legal action against the absent parent for child support before they can receive child-care assistance funds.

Carol Burnett, executive director of the Mississippi Low-Income Child Care Initiative, said the report found that the state's administration of a federal child-care subsidy program results in inequitable outcomes for those who qualify for, benefit from and rely on it.

"(These are) low-income single moms and their young children and child care providers who serve them—a population that is overwhelmingly black and female," Burnett said.

The subsidy program helps low-income working parents actually go to work and afford child-care costs at the same time, Burnett said. Parents who qualify get a voucher based on a sliding-fee scale, but the grant leaves a lot of the allocation and distribution of funds up to the state, which in Mississippi's case means MDHS.

"It's our department of human services that runs this program," Burnett said at the Capitol on Monday. "And this department is under the control of the governor—they have a lot of control and can make the recommendations coming out of this report happen, and we call upon them to do just that."

The report also found that the state leaves federal Temporary Assistance to Need Families, or TANF, dollars on the table that could be diverted to pay for child care in the state. Burnett said that Mississippi left $11.8 million in TANF dollars untouched in 2013.

Advocates are pushing a bill to require the Legislature to divert unused TANF funds to help pay for child care. The other bill would create a child-care advisory committee.

The state does not need the Legislature's authorization to divert leftover TANF funds to child care, Cassandra Welchlin said, but the bill would require them to. Welchlin is a campaign director for the Women's Economic Security Campaign.

The U.S. Commission on Civil Rights' 90-page report details witness testimony from child-care providers and the low-income parents receiving the federal grant funds. Federal funding for that grant has decreased by 53 percent since 2006.

Susan Glisson, who chaired the Mississippi Advisory Committee on the federal report, said her committee cared deeply about ending childhood poverty, and that with bi-partisan support, she believes that child-care subsidies are a key tool to helping working families escape poverty.

"In short, it's something all of us should be able to agree upon," Glisson said at the Capitol this morning.

Of the 124,426 children in Mississippi under age 6 are potentially eligible for funding, only 18,300 actually receive grant dollars each month, Glisson said. Mississippi has one of the highest childhood poverty rates in the nation at 29 percent, and Glisson said this disproportionately affects the state's African American children.

"Forty-seven percent of black children in the state are living at or below the poverty line in comparison to 15 percent of non-Hispanic, white children," she said.

Welchlin said she is talking to Rep. Alyce Clarke, D-Jackson, and Sen. Tammy Witherspoon, D-McComb, about introducing legislation in the House of Representatives and the Senate.