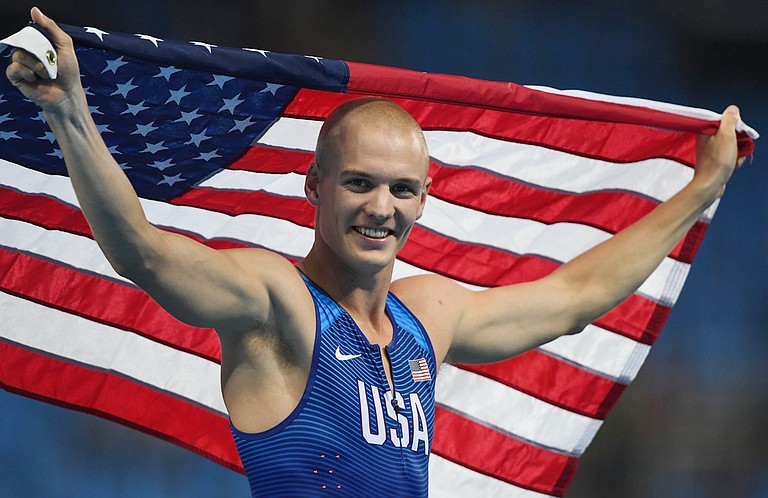 Four years ago, pole-vaulter Sam Kendricks barely missed reaching the U.S. track-and-field Olympic trials. He was 25th on an entry list that only invited the 24 participants.

Instead of getting a chance to head to London, Kendricks became a spectator to the track-and-field trials and the 2012 Olympics. That near-miss provided all the motivation that he needed to work harder to reach the 2016 Olympics in Rio de Janeiro, Brazil.

All that hard work paid off at this year’s track-and-field trials, as Kendricks broke the trials record in the pole vault, clearing the bar at 19 feet and 4.75 inches to break a mark that Tim Mack set in 2004. Kendricks, who is also a second lieutenant in the Army Reserves, set his record and punched his ticket to Rio on the Fourth of July.

The standout pole-vaulter also lettered in soccer and cross-country while in high school and was named Most Outstanding Cadet for Oxford High’s Marine Corps Junior ROTC. He selected the University of Mississippi to continue his career in track and field and his military career.

Kendricks was even more successful as a college sophomore, when he made the USTFCCCA All-American first team for both indoor and outdoor and All-SEC second team. He became the first Rebel to win an NCAA pole-vaulting title with a clearance of 18 feet and 8.25 inches.

As a junior, he made the USTFCCCA All-American first teams and All-SEC first teams for both the indoor and outdoor seasons, and he was selected as the SEC Indoor Field Athlete of the Week.

Kendricks won the SEC, NCAA and U.S. pole-vault titles during the outdoor season. He was the first in school history to win the U.S. title and the first to win back-to-back NCAA titles since 2000-2001.

In 2015, he left UM before his senior year to become a professional track-and-field athlete. He won the 2015 U.S. title and a silver medal at the 2016 World Indoor Championships.

In Rio, Kendricks finished behind Brazilian crowd-favorite Thiago Braz da Silva, who set an Olympic record to win the gold, and silver-medal winner Renaud Lavillenie of France, who entered as the defending Olympic champion and world-record holder.

The former Rebel took home the bronze with a mark of 19 feet and 2.25 inches after a lengthy rain delay. Only 23 years old, Kendricks will likely be in the mix in four years when the Olympic games head to Tokyo, Japan.

Military service and athletics are both family traditions for the pole-vaulting star. Kendrick’s father, Scott, spent 10 years in the Marines and also ran cross-country for the Rebels. Scott also coached his son in high school and is his current coach as a professional. His family has strong ties with UM. His mother, Marni, is the assistant dean at UM’s School of Engineering, and Sam’s twin brother, Tom, attends the school.