Christopher Butler Arraigned for Having Pre-paid Tracfone in Hinds Jail 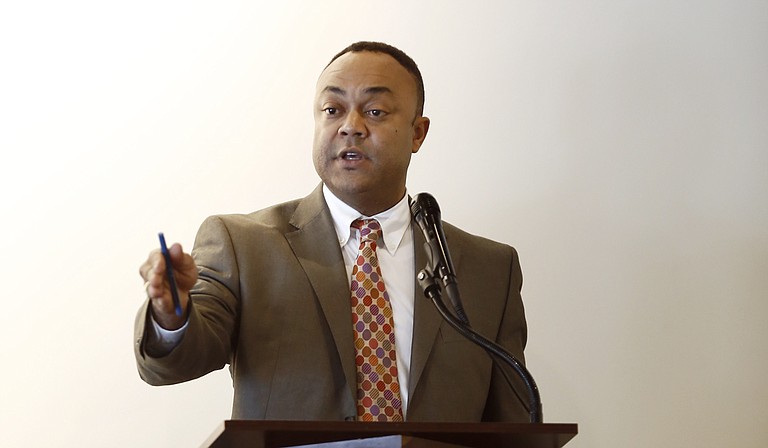 Hinds County District Attorney Robert Shuler Smith (pictured) maintains that the Mississippi Bureau of Narcotics framed Christopher Butler for drug charges, and that Attorney General Jim Hood has no right to try Butler in Hinds County for fraud and embezzlement. Meantime, Hood arrested Smith in June for improper contact with Butler, and has arraigned Butler for having a pre-pay cellphone in jail. Photo by Imani Khayyam.

Butler is being held for $500,000 as a habitual offender after the State of Mississippi indicted him for wire fraud and embezzlement after an alleged financial scheme at Mega Mattress in west Jackson, where he was the sales manager before his arrest earlier this year. Butler was also out on bond for drug charges resulting from a Mississippi Bureau of Narcotics arrest in 2012.

Smith has long maintained that MBN framed Butler, but has not made the evidence of the conspiracy public to date. A joint investigation by the attorney general and the FBI resulted in five counts against Smith for improper contact with Butler and his attorney and family, and one count for helping a different defendant, Darnell Turner, a long-time Smith associate who is under indictment for alleged aggravated assault and domestic violence.

Read more about the investigation and arrest of Smith, as well as other men associated with his office.

Here is the verbatim press statement from Hood's office today about Butler's arraignment:

Jackson Man Arraigned for Possessing a Cell Phone While Incarcerated

JACKSON— Attorney General Jim Hood announced today that a Jackson man has been formally charged for possessing a cell phone while incarcerated at the Jackson Detention Center.

Christopher Butler, 39, was indicted Aug. 3 by a Hinds County grand jury on one count of possession of a cell phone within a correctional facility. He was arraigned today in Hinds County Circuit Court before Judge Jeff Weill, Sr.

The indictment alleges that Butler possessed a Tracfone while he was being held at the Jackson Detention Center.

Butler remains in custody. If convicted as a habitual offender, he faces the possible sentence of 15 years in prison and $25,000 in fines and must serve his sentence day-for-day without the possibility of parole.

A charge is merely an accusation, and a defendant is presumed innocent unless and until proven guilty beyond a reasonable doubt in a court of law.