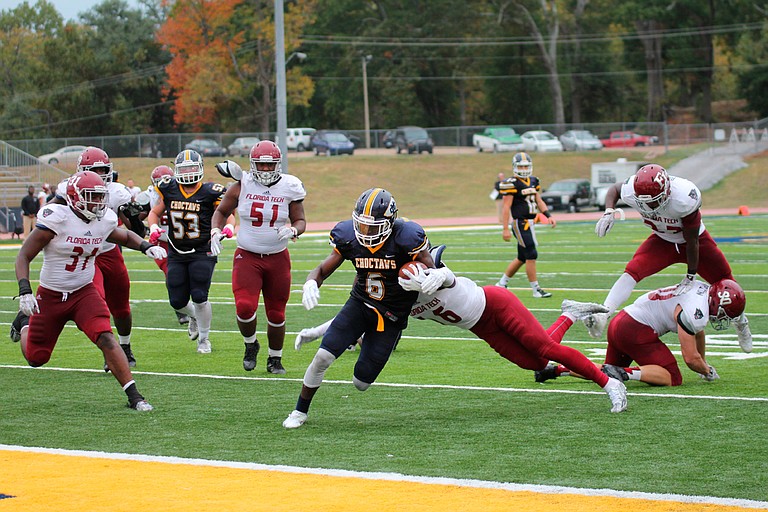 Alcorn had a rough start last season with a 69-6 blowout loss to Georgia Institute of Technology. ASU bounced back with four straight wins by an average 34.5 points per game. Grambling State University slipped by the Braves in a 35-34 overtime win. ASU returned with a 48-7 win over Southern University before Prairie View A&M beat the Braves 40-34.

The Braves came back with another four wins and beat Grambling State 49-21 in the SWAC Championship. ASU earned a berth in the first Air Force Reserve Celebration Bowl, where North Carolina A&T State University won 41-34.

The good news is that he has many returning players including quarterback Lenorris Footman, who stepped in after John Gibbs Jr. was injured, running back Arron Baker, wide receivers Marquis Warford and Brandon Campbell, and linemen Stacey Garner and Mike Brooks Jr., among others.

The Delta Devils opened last season with a 66-0 loss to the University of New Mexico, and it didn't get much better. Southern University, Alcorn State, Alabama State, Jacksonville State, Prairie View A&M, Texas Southern and Grambling State all beat MVSU. After falling to a 0-9 record, MVSU notched its only win of the season, beating Alabama A&M 27-24 in overtime. MVSU ended the season with a 25-19 loss to Arkansas-Pine Bluff.

The building job at MSVU took a step back last season. Rick Comegy should begin to see mostly his recruits on the field this season. The early front-runner for quarterback looks to be Slade Jarman, and he needs to get the ball to star return man and wide receiver Booker Chambers. The secondary could be one of the best in conference with cornerbacks Marquis Green and Farrean Toney.

The 2015 season had all the makings of something great for Delta State. The Statesmen ranked in the top 25 and opened with a four wins to start the season, but they lost their first conference bout 41-37 to the Florida Institute of Technology. The Statesmen bounced back to win 38-17 over Shorter University. DSU went on a four-game losing streak before closing with a win over Mississippi College.

DSU starts a healthy Sullivan this season, though backup Tyler Cameron got experience after Sullivan went down with a collarbone injury. Leading rusher D'Juan Bellaire returns and will spend time at running back. DSU will replace five leading wide receivers from last year, but the team will have lineman Sifa Fanau and a strong secondary.

The Choctaws opened with a 61-6 win over Texas College but lost their next game 34-17 to the University of North Alabama. MC won its final game of the year 42-21 over Belhaven University. The growing pains of transitioning from Division III to Division II showed the rest of the year.

Starting with a 37-0 loss to McNeese State University, the Choctaws lost their final seven games. The first five losses were blowouts, but there was some improvement in the final two losses. In those games, MC lost by 1 point to West Alabama and 8 points to Delta State, respectively.

MC is now a full member of Division II and can take part in the postseason. The Choctaws won't start competing at that level suddenly, of course. There will still be a growing process, but there should still be improvement this season. The Choctaws have returning players such as quarterback Walker Meadows, running backs Josh Dixon, Colt Freeman and Moregan Sharp, and wide receiver Marcel Newson.

The season started out hopeful for Millsaps with a 52-23 win over in-town rival Belhaven University. After that win, the wheels fell off. The Majors went on a seven-game losing streak with blowout losses to the University of Mary Hardin-Baylor, Centre College, Birmingham Southern College and Washington University in St. Louis. Millsaps bounced back with two wins over Sewanee and Rhodes College.

Millsaps is going to try to avoid its third consecutive losing season and get back to its winning ways. Defense should be a strong point, with safety Jared Bullock, linebacker Hector Sandoval and defensive lineman Alex Foust back this season. Foust was first-team All-SAA, Sandoval was second-team All-SAA, and Bullock was an honorable mention. Second-team All-SAA offensive lineman Austin Harris and All-SAA honorable-mention receiver Rashad Sims also return.

The Majors begin the season again with Belhaven and face Trinity University, the only team they didn't face last season. Millsaps begins conference play by going on the longest road trip of the season against Chicago.

The team broke through with a 42-33 victory over Warner University to end a 15-game losing streak that dated back to 2014. Belhaven then dropped its next two games to East Texas Baptist University and McMurry University but ended the season with a 12-6 win over Sul Ross State University.

Last season, Belhaven was a young team but also a team in the process of moving from NAIA to Division III. The Blazers started freshmen quarterbacks Clayton Webb and Tristan Hibbeler and only had nine seniors on the roster.

For this season, though, Belhaven will bring back most of its leading rushers and receivers. There were 23 juniors and 25 sophomores on the roster last season, and if most of them come back, this squad should have plenty of experience. That means most of the defense should return and hopefully be a better unit than the one that gave up 38.7 points per game.

As Belhaven moves divisions, there will still be some tough times. Head coach Hal Mumme has seen nearly everything in his career, so chances are good that he will get this program on track.

Hinds then went on a three-game losing streak that put its record at 3-3, though one of those was a one-point loss to eventual national champion Northwest Mississippi Community College. The Eagles got back on track in their final three games with another string of victories to end the season.

Hinds almost always recruits well, and head coach Gene Murphy does an effective job behind the helm each season. The Eagles will likely be competitive again this year.

Holmes has been close to turning the corner in the last two years, with several close defeats during both seasons. If the Bulldogs can add just a little more talent, they can make that turn. In our state's junior-college system, it will be hard to rise too far without bringing in new blood. But that doesn't mean it's entirely impossible for either Holmes or Hinds.

Read a preview of the big four colleges in the state here.