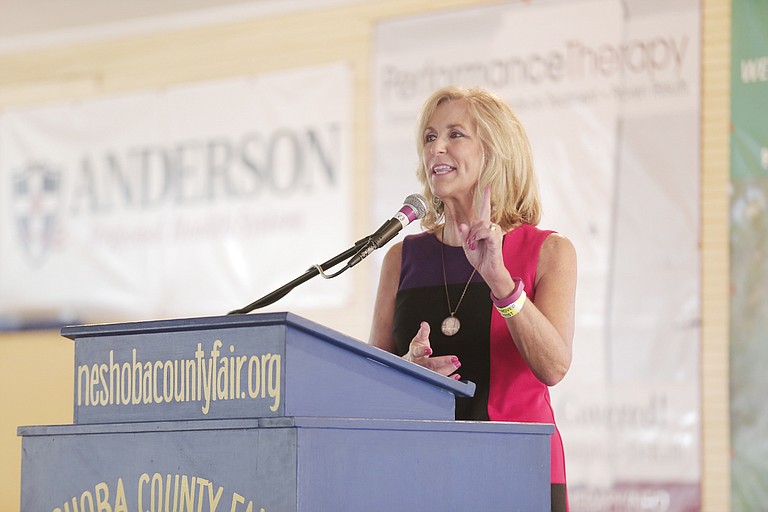 JACKSON, Miss. (AP) — Under the pavilion at the Neshoba County Fair last month, politicians touted their achievements as always. But there were very few in the way of new proposals. Except for state Treasurer Lynn Fitch, who made two very specific proposals.

One was a call for a state law requiring women doing equal work receive equal pay to men.

The second was a call for Mississippi to enact a constitutional amendment requiring a balanced budget.

"We want, we deserve, and we must have, a balanced budget amendment in our Constitution," the second-term Republican treasurer said.

Mississippi already has a requirement for a balanced budget every year. The part of state law setting out Mississippi's budgeting process states in part that planned expenditures "shall not exceed the amount of estimated revenues that will be available in the general and special funds for appropriation or use during the succeeding fiscal year."

Fitch, though, argued that's not enough. She pointed to problems with the budget that lawmakers enacted for the year that began July 1. Lawmakers adopted a spending plan that overestimated revenues by $56 million after legislative staffers counted some money that would no longer be collected. Then Attorney General Jim Hood issued a series of opinions saying lawmakers couldn't take $72 million from various trust funds and spend it.

"We're already $130 million in debt, so we've got to balance the budget," Fitch said at the fair.

The situation could get worse. Tax collections for the 2017 budget got off to a slow start in July, with taxes collected by the Revenue Department ending up $14 million below estimated amounts. Also, Medicaid and some other mandatory expenses are underfunded, meaning lawmakers are likely to have to backfill deficits in those programs when they come back in January.

Fitch said she'd like to see lawmakers propose the amendment to voters, which would require a two-thirds vote in each house. However, she reserved the possibility that she would launch a petition drive to go through the arduous process for voters to propose an amendment.

It's unclear how much aid Fitch will get from lawmakers, now having attacked their practices twice this year, after earlier questioning spending in the state's annual bond bill to borrow money for projects. Fitch is clearly ambitious, and reports indicate she's told some supporters that she'd like to run for attorney general in 2019. Spokeswoman Michelle Marston for now only says Fitch is "evaluating how her unique skill sets can be used for the best interests of Mississippi and its citizens in the future."

The details of Fitch's proposal remain unclear. She said she's drafting language based on examples in other states, and doesn't know, for example, if it would apply only to General Fund spending or all state accounts. Marston said Fitch might not oppose language allowing overspending in an emergency, but thinks, for example, lawmakers have gotten too willing to waive a law requiring they set aside 2 percent of revenue as a reserve each year.

One group that has studied balanced budget rules says political culture, and not the precise language in any law, may be more important in maintaining state balanced-budget rules. The National Conference of State Legislatures says as many as 49 states have balanced budget requirements, excluding only Vermont.

"For the majority of states, however, the most important factor contributing to balanced budgets is not an enforcement mechanism or a provision specifying how a shortfall will be resolved," NCSL wrote in 20102. "Rather, it is the tradition of balancing the budget that has created a forceful political rule to do so."