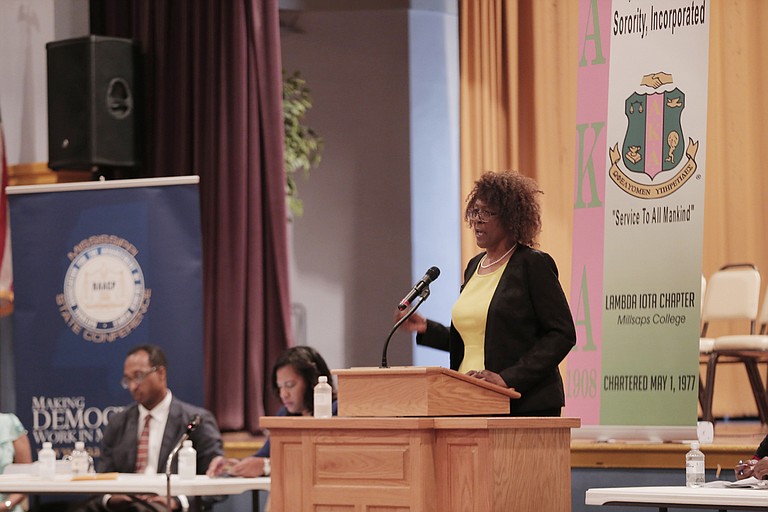 JACKSON — For those wondering what is next in the saga of the takeover of the Jackson Medgar Wiley Evers Municipal Airport, look no further than Charlotte, N.C., and its ongoing discussions with the Federal Aviation Administration.

"What the FAA does is they license airport operators," Jackson City Council President Melvin Priester Jr. said April 21.   "What went on in Charlotte, and what will happen here, is the fight over who has the right to the license."

The Mississippi Airports Association raised FAA concerns in its Feb. 18, 2016, letter warning the bill's author, Sen. Josh Harkins, R-Flowood, against the legislation. "As highlighted by the (Charlotte) dispute, the FAA will not consider issuance of an operating permit to a new entity without an accompanying request from the current operator," MAA President Cliff Nash wrote.

"Should a court uphold the legislative dissolution of JMAA without a transfer of the operating certificate for JAN (Jackson airport), no one can say for certain what would happen to the operating permit: It could revert to the City of Jackson until any dispute is resolved, or, worst case, it could be revoked." That outcome would hurt the entire state, Nash added.

The FAA has several requirements to ensure that the new "airport operator" is suited to the task, a document provided by the FAA's media representative for the southern states, Kathleen Bergen, indicated.

The most crucial of these guidelines states that "the FAA must also ensure that the new operator has the authority to act as a Sponsor," which includes a "Good Title."

"Does the owner have a deed to the property or can owner obtain a deed to show ownership of the property?" the guidelines ask. This question, presumably, will be key to the legal battle to come.

'We've Got to Lawyer Up'

The City of Jackson owns most of the land that the airport is on, the result of a deal struck before the airport was built. Although amendments to SB 2162 do give the authority to sell the land to the Legislature, it never states that ownership of any of the airport land will transfer from the City.

In Charlotte, the battle between the majority Democratic city government and the Republican state Legislature has been ongoing for over a year and a half. During that time, attorney's fees for the state-created commission have topped half a million dollars with no foreseeable end in sight, the Charlotte Observer reported.

Priester said he was mostly concerned with "making sure we hire the right attorneys."

"The first step is we've got to lawyer up," Priester told the Jackson Free Press. "So my first priority with the city council is to make sure that we don't play favorites."

The Jackson Municipal Airport Authority Board of Commissioners has already hired Fred Banks Jr., a renowned civil rights attorney and former Mississippi Supreme Court Justice, in December, and members of the board are very vocal about their intentions to fight the bill when it becomes law.

"The litigation is going to proceed," JMAA Commissioner Evelyn Reed said April 21, "and then the FAA will get involved."

"The FAA generally has the last say," Reed added.

JMAA Board Chairman Dr. Rosie L.T. Pridgen also protested the "illegal takeover" as she has since it first went public.

"Thank you citizens of Mississippi and strategic partners for rallying the cry for help to try and defeat the hostile takeover of Jackson's airports," she said in an April 21 statement. "It is unfortunate that the majority of our state legislators would rather spend time, energy and resources with this illegal takeover than to address pressing issues to make things better for our state."

"Senate Bill 2162 has no merit and doesn't represent the genuine hospitality of our great state," Pridgen stated. "All citizens are asked to search your consciences and demand that Governor Phil Bryant veto 2162. The passing of this bill has a negative impact on the state's image and economic development opportunities."

After the Capitol Complex Improvement District bill died last week, Jackson Mayor Tony Yarber fired back at the Legislature for not only killing a potential revenue source for the City's plan to revitalize the downtown infrastructure, but also for taking away the airport.

"The legislative majority took further aim at Jackson with the passage of an unconscionable bill that hijacked control, operation and maintenance of the City of Jackson's municipal airports, namely the Jackson Medgar Wiley Evers International Airport and Hawkins Field Airport. We stand with the ever-growing list of those demanding that Gov. Phil Bryant veto the bill," Yarber said in the statement.

The new bill, once signed into law, would reduce the number of appointments that the mayor of Jackson chooses from five to one. The City Council would also only get one appointment. That brings the total to two appointees for the elected representatives of the city against the seven other appointees chosen by state-level interests. The governor and lieutenant governor get a total of three appointees, although they must all be Jackson residents.

The adjutant general of the Mississippi National Guard and the executive director of the Mississippi Development Authority also each receive one spot on the new commission—appointments criticized as ethical concerns in a Feb. 18, 2016, letter from the MMA to Harkins. Those appointments could "create significant conflicts of interest," MAA President Cliff Nash, of the Tupelo Regional Airport, wrote to Harkins.

JMAA Chairman Dr. Rosie L.T. Pridgen said the airport bill “has no merit and doesn’t represent the genuine hospitality of our great state.”

The adjutant general, Nash wrote, makes decisions about National Guard installations and operations at airports throughout the state, and MDA is responsible for helping with economic-development activities at all 73 of the state's airports, Nash wrote. Thus, appointments of them both to the Jackson commission "may create a natural prejudice in favor of that airport for future economic or air service development projects, and a prejudice against the other airports in the state. Likewise, these appointments may create problematic relationships under Mississippi's ethics laws."

"It's a bad bill. It's a hostile takeover," Sen. David Blount, D-Jackson, said, deferring the question of litigation to the JMAA. "That's going to be up to the Jackson Municipal Airport Authority, but I expect it."

"The first move is to file a suit against the actions of the legislature in both state and federal court," Sen. John Horhn, D-Jackson, said. "Once we get those matters resolved, then we will address the issue at the Federal Aviation Administration."

"We think we have a strong case that we can plead that this was politically motivated," Horhn said. "And there might also be the possibility that it was racially motivated."

Jeffery Stallworth, a former JMAA commissioner, filed a lawsuit on April 6 against the governor, including only a copy of Senate Bill 2162 as evidence. 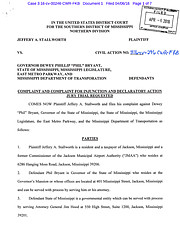 His complaint goes into detail about how he believes the creation of the new board to be a violation of his constitutional rights, arguing that he has "suffered harm including emotional distress."

Stallworth, who served on the board from November 2013 until September 2014, filed the suit against Gov. Phil Bryant, the State of Mississippi, the Mississippi Legislature, the East Metro Parkway, and the Mississippi Department of Transportation.

Matt Steffey, a constitutional law professor at Mississippi College School of Law doubts, however, that Stallworth's case has standing. " What gives him the right to bring the lawsuit? ... I would expect this case to be dismissed long before it reaches any claims on its merits," Steffey said.

The bill's author, Harkins, did not have much to say about the lawsuit over the phone April 26. "I don't think a whole lot about it," Harkins "I think it's a reach."

"I don't see how he has emotional distress," Harkins said. "Or how the city will suffer a loss of revenue. It's evident in the bill ... anyone that can read the bill can see how they don't lose revenue."

The current JMAA board did not choose to comment on the suit. Banks also declined to make any comment on Stallworth's suit.

The Mississippi attorney general's office said in an email that any response it had to the suit would be through court documents, none of which had been filed by press time.