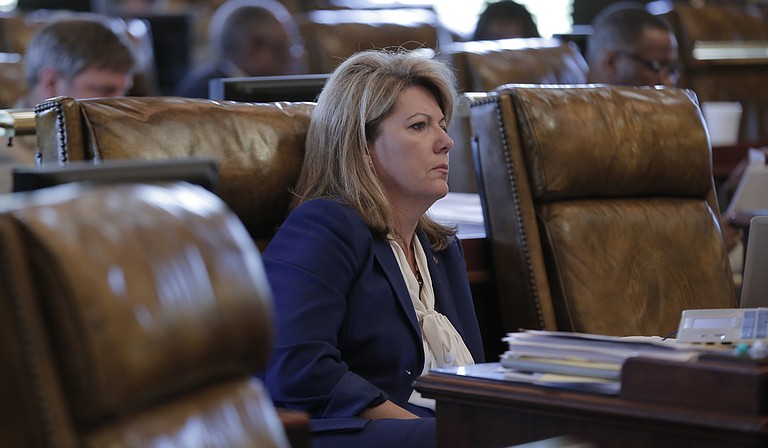 The election code and divorce-grounds bills, both legislation that Sen. Sally Doty, R-Brookhaven, authored and worked on, died right at the end of the session. Photo by Imani Khayyam.

An abused Mississippi spouse still can't use domestic violence as grounds for divorce, and lawmakers can continue to spend campaign donations on mortgages, automobiles, clothing, tuition payments or non-documented loans after state lawmakers closed up shop early and skipped town this week.

They did manage to pass a hefty tax cut and slash several state agency budgets on their way out the door, however.

The Senate adjourned Wednesday, and the House adjourned early Thursday morning. Technically, the last day of the session is Sunday, April 24, but lawmakers got to leave work early after the Senate suspended business on Wednesday, leaving several significant pieces of legislation to die from lack of completion.

The 200-plus-page election-code bill, which contained several revisions including implementing poll-manager training programs and reducing the number of paper ballots printed, died in conference. The campaign-finance reform portion of the bill, which would prohibit the personal use of campaign spending, was also left to another year.

The House of Representatives had a long and contentious debate on the election-reform bill, House Bill 797, Tuesday, but voted to recommit the bill for further conference. That conference never happened, and the bill died there.

Sen. Sally Doty, R-Brookhaven, worked on the bill throughout the session and helped the conference report. She said that while she was disappointed that the bill did not pass, that another year would give those who worked on the bill more time to make members of both chambers more comfortable with the changes.

"We're going to have to address campaign-finance reform in Mississippi, if not this year, then next year or the year after," Doty told the Jackson Free Press.

Doty said she understands concerns from longtime members about changing the rules that will make reporting campaign-finance expenditures more detailed.

"I firmly believe it's unfair to change the rules in the middle of the game, but it's time to start," she said. "Within a couple of election cycles, we'll have everybody on board—we'll do round two next year."

"I helped write the conference report; it wouldn't have come to the floor if I didn't want it to come to the floor," Gunn told reporters Thursday after the House had adjourned. "I was disappointed it did not pass; we will continue to work on that, I felt like that was a good piece of legislation."

Lt. Gov. Tate Reeves reiterated his stance on campaign finance for reporters on Thursday. "I believe in unlimited contributions and unlimited disclosure," he said. Reeves has $3.4 million of campaign cash on hand.

Reeves said it was likely that the Legislature would look at the election-reform bill next year again. When asked about the personal-use section of the bill, he said he does not spend any of his campaign funds on anything personal. Reeves said he spends a lot of money making sure campaign-finance disclosure occurs. He said three of the eight full-time staffers he had on his 2015 election campaign focused on his campaign finances, and that those running smaller campaigns might find it harder to afford to pay for those services.

Sen. Doty's effort to make domestic violence the 13th ground for divorce in the state died after the Senate voted to recommit the bill to conference on Tuesday. Some senators expressed concern over the conference report mainly because it contained a new 14th ground for divorce: after a willful and continued separation without cohabitation or intent to return for two years, either party could file for a divorce.

The 14th ground was not in Doty's original bill, which was intended to address domestic violence in marriages.

Judiciary A Committee Chairman Sean Tindell, R-Gulfport, confirmed on the Senate floor that the 14th ground was added in conference; similar bills suggesting a divorce ground for separation over similar periods of time had died in committee earlier in the session. He said that the 14th ground would not interfere with a spouse's ability to seek alimony, custody or support immediately after a spouse leaves.

Speaking against the conference report, Sen. Angela Turner, D-West Point, expressed concern about the 14th ground added in conference. Currently, she said, an abandoned spouse seeking a divorce after six months still does not have a ground until a year has gone by; the fourth ground for divorce in Mississippi allows the abandoned spouse to file for divorce a year later.

"But to allow someone to leave the home for two years, and that's all they have to do, they've abandoned the house, children, may have left the mortgage unpaid, they have the right to come and petition for divorce, I could not stay in my chair," Turner said.

She said adding a 14th ground seemed like a major undertaking for so late in the session.

Tindell said one of the issues that comes up in divorce cases is when a spouse is forced to stay in that marriage because of abuse, something that the 14th ground could potentially fix.

The Senate voted 26-22 to recommit the bill to conference. Another conference report was filed at some point after that vote that extended the 14th ground to be a three-year separation, but neither chamber took up that conference report before they left—thus a bill that originally was intended to make domestic violence grounds for divorce died.

Doty said she was disappointed that the bill didn't pass.

"I don't think there was a real understanding of what that 14th ground was in the Senate, so hopefully next year we can just file it (the bill) straight with domestic violence, and it won't have it tagged on to it," she said.

Lt. Gov. Reeves said lawmakers always leave some things undone in a session and said he takes a slightly different approach than most legislative leaders.

"My view is when it comes to any single piece of legislation, Mississippi has been a state now for 199 years. If we've made it this long without any single piece of legislation becoming law, we probably can make it one more year," Reeves told reporters on Thursday. "And whether we like it or not, we're going to be back here in January, and we'll have the opportunity to fix anything that didn't get done."