The Chicken, the Egg, the Street Food 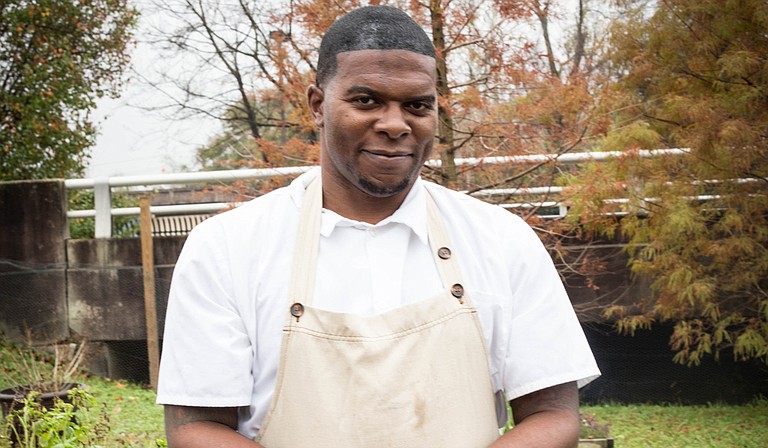 Nick Wallace cooked for the “Mississippi Mama’s Potluck” dinner at the James Beard House on April 13 and will prepare a pop-up menu for Museum After Hours on April 21 at the Mississippi Museum of Art. Photo courtesy Christina Cannon Boteler

The kitchen was busy and loud at the James Beard House on April 13.

JBF is a nonprofit culinary organization in New York City that aims to celebrate, nurture and honor America's culinary heritage. Peter Krump, who was a student of food writer, teacher and cookbook author James Beard, founded the organization in 1986. It gives culinary scholarships to students, puts on educational conferences, gives out awards each year and also hosts more than 200 guest-chef dinners a year at the Beard House.

This recent dinner marked Wallace's third time in that kitchen. His first James Beard dinner was in January 2013 when Tom Ramsey gathered six chefs, including Wallace, Jeremy Enfinger, Jesse Houston, Blumenthal and Moore, for the "Southern Comfort Redux," which was a Friends of James Beard Dinner event. The most recent time Wallace served at the Beard House was in December 2013, when he hosted the "Southern Hospitality" dinner.

"When we did that first dinner, I cooked my personality, like I always try to do, and they were very intrigued and wanted me to come back," he told the Jackson Free Press.

Wallace says the inspiration for the April 13 dinner was his family. For the menu, he used old family recipes, adding his touches to them.

"It still all speaks Mississippi because that's where it started," he says.

His favorite dish for the dinner was the tomato-crusted Simmons Farm Delacata catfish with Delta Mississippi rice grits, Garden Farmacy kale, a preserved lemon jus and pepper bacon. "It had really eclectic flavors on the whole dish," he says. "... All the ingredients couldn't be eaten separately. They had to all be eaten together, and it was just a perfect combination. And it was an old dish so I used (3-month-old) lemon preserves ... in the sauce. It's a beautiful thing when you can preserve items and actually use them on something as wonderful as a James Beard dinner. It was perfect."

This week, Wallace will serve up his "Chicken and the Egg" pop-up menu, featuring eggs and chicken from Mississippi, for the Mississippi Museum of Art's Museum After Hours event, "Pop Goes the Culture." The pop-up menu, which will include dishes such as hot chicken with a pink-peppercorn aioli, American cheese, pickles, bread and fries, among other dishes, will be served from 11 a.m. to 2 p.m., and at 5:30 p.m. on Thursday, April 21, and the followingFriday and Saturday from 11 a.m. to 2 p.m.

LurnyD’s Grille is one of the food trucks that will be at Dinner and a Movie: A Food Truck Festival on May 19 at the Mississippi Museum of Art.

Third Thursday at MMA will also have the third annual "Dinner and a Movie: A Food Truck Festival." The museum and the Jackson chapter of the American Advertising Federation partner for the event, and the proceeds are split between the organizations.

Cindy Minton, the chapter's incoming president, says this is one of the public-service events the Jackson AAF hosts each year. She has been the public-service chairperson for five years, except for 2014, when Jessica Russell from the Godwin Group served in the role. Minton accepted the position again last year and approached Julian Rankin, MMA's director of marketing and communications, about doing another food-truck festival.

"It's a great thing," Minton says. "(We) make a little money but also bring a lot of awareness to the museum and to movie nights for the spring and summer. It's just another outreach that we do to try to help within the city, and the food truck was something that was really popular in other places, so that's where the original idea came from."

She says that because the food-truck movement has been growing in Jackson and throughout the state, the Jackson AAF wanted to give the vendors a chance to showcase their food. Events like this are important for the city and the state, she says.

"Hopefully, it'll be something that we continue to do," Minton says. "... The food trucks will actually come downtown and sell their wares ... if (people) know that (they're) there. We've just got to support each other, and it's actually helping the museum along with that because there are so many people that don't go to the museum or any of our museums. They need to be aware of what's here and available for them, and support our state—not just the city, but the state."

While last year's festival had 10 trucks and mobile food vendors, this year will have 13 eatery options lining up on both sides of Pascagoula Street to make the crowd flow a little easier. Some of the local trucks and vendors include LurnyD's Grille, 2 for 7 Kitchen, Hog Heaven BBQ and Pop Culture Pops. The event will also feature trucks and vendors from around the state, such as Small Time Hot Dogs and one visitor from Tennessee: Memphis Soft Serve Ice Cream Truck. In the case of rain, Minton says the festival will be postponed, possibly to May.

The Museum After Hours "Pop Goes the Culture" event at the Mississippi Museum of Art (380 S. Lamar St.) on April 21 will feature work from artists such as Will Brooks, Justin Ransburg, Steve Hendrix and Chris Mitchell. The food trucks will begin serving at 5 p.m., but Museum After Hours doesn't begin until 5:30 p.m. For Screen on the Green, the museum will screen "Toy Story 3."

In addition to the mobile-food vendors and the pop-up menu, the event will have a cash bar. Museum After Hours is free and open to the public. For more information, visit msmuseumart.org, call 601-960-1515 or find the events on Facebook.

Kona Ice of the Bayou

Update: The food truck festival has been rescheduled for May 19, the night of that month's Museum After Hours.