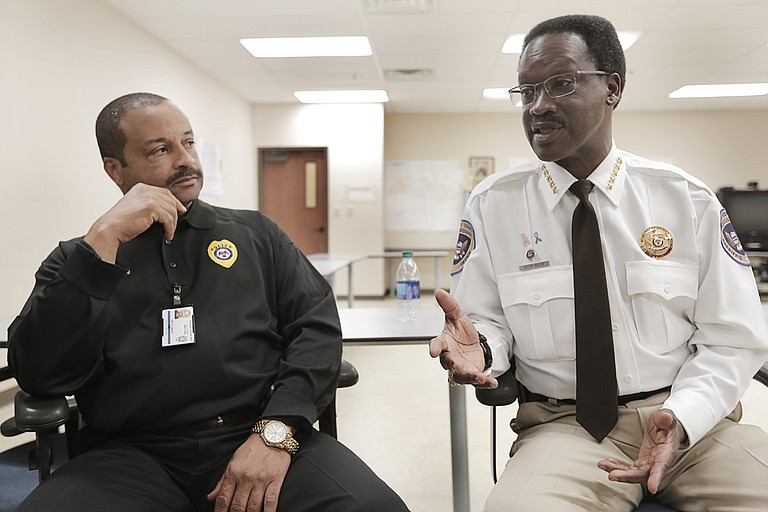 Jackson Police Chief Lee Vance and Sheriff Victor Mason have joined forces to create a new operation to attack crime and quality-of-life issues in the City. Photo by Imani Khayyam.

At the Second Precinct's late-afternoon roll call at the Metrocenter on Friday, April 15, the Jackson Police Department and the Sheriff's Department joined together to create Operation Side by Side, one of the newest strategies to combat crime in the city. As the JPD and Hinds officers broke up to take to the streets, Jackson Police Chief Lee Vance told the Jackson Free Press that one of the goals of the operation is to increase officer visibility in Jackson and quell citizens' fears.

"All through the years, especially since I got to the point where I was a management person, the number-one complaint that I got was this: I don't see the police enough," Vance said, sitting next to Hinds County Sheriff Victor Mason. "They love that visibility."

Vance said, ideally, a citizen should be able to sit on her front porch and see a patrol car every 45 minutes. Visibility has suffered because JPD has had to stretch its resources to do more such as answering burglary alarms and service calls. He wants to change this by combining resources in departments to make a conscious effort to get out into the neighborhoods to make citizens feel safe and criminals feel uncomfortable.

"In the JPD, we've had a bad quarter, especially as it relates to violent crime," Vance said. "So this is part of the strategy that we've come up with to quell that, to reinforce in the citizens of this city that we're not just going to stand by. We're going to be out here, and we're going to be fighting."

Operation Side by Side brings officers from JPD's Direct Action Response team, DUI team and other departments together with enforcement from the sheriff's department, which is helping focus enforcement on the areas, such as Precinct 2, that are hardest hit by crime. Starting out, the main focus is on local checkpoints, DUI enforcement and felony warrants. Vance said he also wants to target quality-of-life issues such as complaints about potential drug houses, citizens shooting for fun or prostitutes soliciting on the street. The operation is slated to continue into the summer, and hopefully will be open for other forces such as the VICE team to partner up.

"Let's calm this place down," Mason added. "This is the capital city. We're going to do our part. We just want the citizens to know that they're going to have to get behind us and get with us."