How to Improve Pregnancy Care in Mississippi 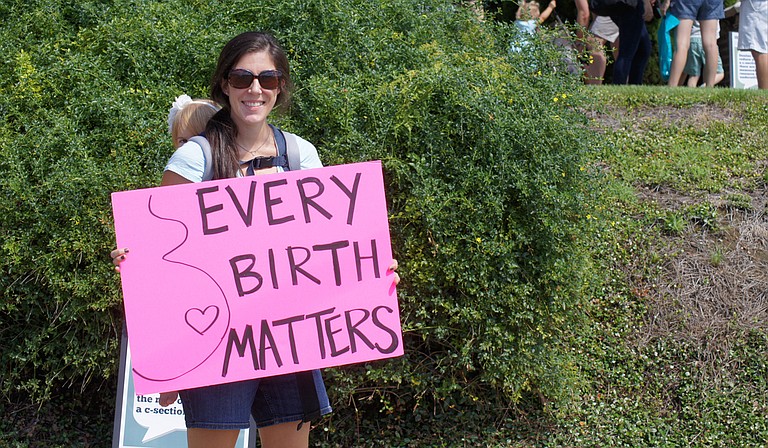 Carrie Huhn helped coordinate an Improving Birth rally in Jackson, on Sept. 12 in front of Duling Hall, hoping to educate moms and soon-to-be momks about their options and staying healthy during pregnancy. Photo by Arielle Dreher.

Heather Roberts wanted to have her first child naturally. She was 20 years old at the time, so she trusted her doctor's advice.

Due to one slightly high blood pressure reading early in her pregnancy, Roberts was told to avoid salt leading up to giving birth—so she did. Then, as she went into labor, she had to be induced for medical necessity because she was showing signs of high blood pressure and preeclampsia. Roberts said her medical induction could have been avoided if she'd been educated from the get-go. As Roberts discovered later in her own research, some salt is necessary in a mother's diet. Roberts said she should have watched her blood pressure throughout her pregnancy, regulating her salt intake instead of eliminating it altogether, that way her blood pressure might have been more regulated at the time of her pregnancy.

During her second pregnancy, Roberts was determined to have her second child naturally. Her doctor, however, advised her to be induced because the baby was going to weigh around 9 pounds, according to the end-of-term ultrasound. Roberts trusted her doctor again, understanding that medical intervention can in some cases keep a mother and infant healthy.

"I believed what my doctor said because (my daughter) was measuring large for date, and I was induced for absolutely no reason," Roberts said.

Roberts' little girl weighed 7 pounds, a manageable weight that she likely could have delivered naturally. Roberts was upset that she was induced solely based on the ultrasound that proved false, and her experiences drove her to research evidence-based care about labor and natural birth.

Mississippi: the Worst State to Give Birth

From Facebook communities to groups that meet in person, many Mississippi mothers are tired of inadequate maternity care. On Sept. 12, a group of concerned mothers, working with the nonprofit Improving Birth, held a rally and informational fair at Duling Hall in Fondren to raise awareness and educate current and future moms about the high C-section rate in Mississippi, the American Congress of Obstetricians and Gynecologists, or ACOG, standards that local OB-GYNs can follow and local doula services. (Doulas are birth companions and supporters that are nonmedical people.)

Carrie Huhn coordinated the rally in Jackson. Huhn, a mother of two with one on the way, has a passion for educating other mothers since her first pregnancy, when she her doctor seemed supportive of her choice to give birth naturally, but then come delivery time, felt like her doctor did not support her anymore. Huhn's experiences, like Roberts, led her to research.

Huhn said most women must learn from their own research or by talking to other moms. "(Education is) not necessarily coming from the doctors' offices, and women are not being informed about the decisions that they need to make," Huhn said.

Education and health are connected—particularly in Mississippi because it is already an unhealthy state, Huhn said. Mississippi has one of the highest obesity rates in the country. Health during pregnancy is just as important if not more so, she said, but often, the "eating for two" myth can cause unhealthy pregnancies before the baby is even born due to over-eating and faulty nutrition.

A September WalletHub study ranked Mississippi as the worst state to have a baby in the United States. Mississippi earned the last rank due to unhealthy births (infants born with low birth-weights or preterm), high infant and maternal mortality rates, infrequent post-delivery nutrition care, and low numbers of OB-GYNs and pediatricians in the state.

The WalletHub study also found that pediatricians in Mississippi are paid one of the highest annual wages in the country, making pre-natal care potentially less affordable to the public, spokeswoman Jill Gonzalez said.

Macy Russell had her first child in April, and she took initiative to educate herself from the outset of her pregnancy. Russell was considered high-risk in her pregnancy due to her blood-clotting disorder, and she consulted with several medical professionals throughout her pregnancy as a result. Russell had a prenatal specialist, an OB-GYN and a pulmonologist to monitor her pregnancy.

Russell, 35, said she asked lots of questions of all her doctors. She said her doctors encouraged her to try to have her baby naturally, but said she would be supported if she could not. Russell ended up having a cesarean section since she was at risk of bleeding out with her blood-clot condition, but she wasn't forced into the decision, and instead was informed of what was happening to her body and what would be best for her and her baby.

Russell said she did so much research up-front because she is in education herself and she knew her pregnancy was high-risk from the beginning, and she encourages other pregnant mothers to not go into their doctor appointments blind. Russell said getting a second opinion is important.

"A lot of people get intimidated in front of their doctor—stand firm, you don't have to go to the hospital and check in for a cesarean," Russell said. "You are not required to do that; you have the right to do what you want to do."

Mississippi's C-section rate is almost 36 percent, while the national average sits at 33 percent. Critics of C-sections and other interventions done in birth procedures point to the high risks associated with these surgeries. In some cases, such as Russell's, a surgery will save the mother and child, but in other cases, like Roberts', intervention might not have been necessary.

Grace Greene is a Bradley childbirth educator; she teaches classes in natural childbirth to women in the Jackson area. Greene said a normal, natural birth can take a long time. She said she is not anti-intervention; she is anti-unnecessary intervention in childbirth.

"Going into labor on your own means your body is ready to give birth, and all of your hormones are ready to go," Greene said.

Greene gave birth to her own daughter naturally, and she said she was up walking around within an hour, feeling good. She hears stories of women that are induced, however, who struggle to get up that quickly after birth.

The Jackson resident teaches a healthy diet to expecting mothers in her class as well as their options for giving birth. She said a pregnancy diet needs to be half protein, although pregnant mothers are usually told to eat low-sodium diets, but if your blood pressure goes up, you need salt in your diet. She said plenty of water, eggs, meat, dairy, and lots of fruits and vegetables are also a part of a good diet for expecting moms. Cutting out processed and artificial foods is also critical to keeping the baby healthy.

During her second pregnancy, Roberts knew that skin-to-skin contact was good for the infant as soon as it's delivered, but she felt pressured to hurry as she breast-fed her child for the first time.

The U.S. Centers for Disease Control and Prevention tracks maternity practices in infant nutrition and care in each state. Mississippi had the worst score in the nation.

The report backed up Roberts' experience after delivery. Only 27 percent of facilities in the state initiate skin-to-skin care for at least 30 minutes after the delivery of the newborn. The initial skin-to-skin contact is important to facilitate breastfeeding in order to improve the infant's health outcomes and reduce the risk of damage to the infant's immune system.

Roberts knew this going into her second pregnancy, but she felt that she had to fight to keep her infant to feed her, with a nurse keeping time over her shoulder.

The leading cause of infant mortality is preterm birth, according to Dr. Charlene Collier, a perinatal health consultant at the Mississippi Department of Health and OB-GYN. A variety of factors cause pre-term births, many relating to a mother's health before and during pregnancy. Collier said moms who are obese, have diabetes or hypertension are at risk of giving birth pre-term.

"If a mom is unhealthy, her risk of having a poor outcome is higher," she said.

Some pre-term births are necessary for the health of the mother or the infant, but early-elective deliveries, a practice of inducing or performing C-sections between 37-39 weeks of pregnancy, used in some hospitals out of convenience for nonmedical reasons, also contributes to pre-term births.

The state health department began working with March of Dimes and other organizations last year to lower the state's percentage of early elective deliveries in hospitals throughout the state. The state asked all the birthing hospitals in the state to reduce early-elective delivery rates to less than 5 percent and develop policies to not induce mothers before 39 weeks of pregnancy. Thirty-eight of 44 birthing hospitals signed up for the program, and so far 15 have received their banner recognizing that they reached the less than 5 percent goal.

The state health department continues to promote planned pregnancy by offering birth-control options and helping women prevent unwanted pregnancies. Planned pregnancies will allow time for mothers to prepare to take care of themselves well before getting pregnant, Collier said. In turn, this should drive down pre-term birth and infant mortality rates.

"We want everyone thinking about infant mortality," Collier said. "It's hard work and a lot of work."

But it's worth it, Collier said since the state has seen an 11 percent decline in rates from 2009 to 2013. With more education and outreach to hospitals and mothers alike, Collier said the statistics should change in the next five years.