Do Hip-Hop and Fondren Need Each Other? 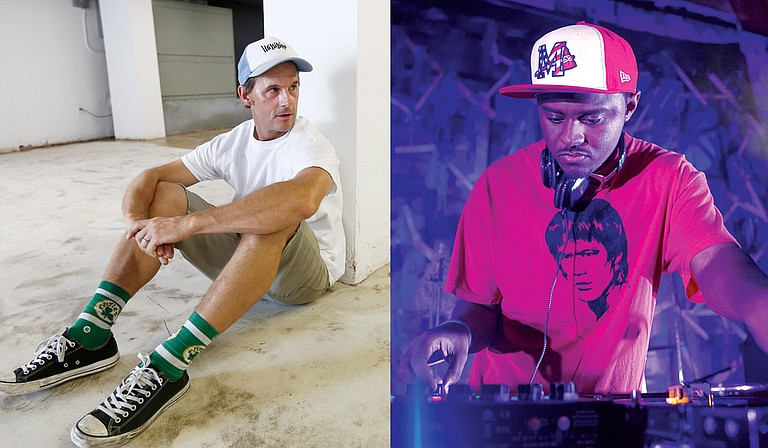 A dust-up between local businessmen Ron Chane (left) and Phillip Rollins (right) over hip-hop at Fondren First Thursday may bring more hip-hop to the area. But, if so, it will definnitely have less profanity. Imani Khayyam / Aaron Phllips Photography

By the afternoon of Sept. 10, Phillip Rollins had endured six days, 157 Facebook comments (not including subthreads), more than three hours of meetings and phone calls and at least two media interviews about Ron Chane's decision—and then the rolling back of that decision—to nix hip-hop from the monthly Fondren's First Thursday event. Chane made the statement due to vulgar lyrics used on stage by performers who joined a performance in progress at the Sept. 3 event.

"I'm beyond tired of talking about it," said Rollins, also known by his deejay name DJ Young Venom, as he settled into one of the dark couches in his Midtown music and comic-book store, Offbeat.

By then Rollins, and others, had talked a lot about the original ban decision, which Rollins had criticized soon after seeing Chane post online that he was banning "the genre" due to the profanity. After a day of heated Facebook discussion—with some people defending Chane and others Rollins—the two men came together with Brad "Kamikaze" Franklin and Corinthian Washington, a young promoter who had organized the performance that included the profanity, which violates the FFT rules and for which he later apologized, saying it was unexpected.

In the end, hip-hop would have a bigger stage, in the literal and metaphorical senses, at the monthly event. Rollins' store, in Midtown, would be more actively involved, serving as the drop-off point for applications from musicians wanting to perform. And at the next FFT, on Oct. 1, the plan is to have an Offbeat stage for hip-hop acts in a prominent location at the growing neighborhood festival.

That resolution did not come before a day of intense debate between Rollins, Chane and their supporters about whether Chane's decision was racist to ban all hip-hop acts because of a rule violation by some rappers.

Chane maintains that while it was the wrong decision, one made "under duress," race never entered into the equation.

"I said, 'I have to put water on the fire,'" Chane told the Jackson Free Press, referring to his apology, and says he went too far in banning hip-hop. "The wrong thing was said. I said it wrong because I got it wrong. I should have been a little smarter."

Away from Black Culture

Even though things have simmered down, emotions are still raw. Franklin, an elder in Jackson's hip-hop scene who helped broker the Sept. 5 meeting between Rollins, Chane and Washington, said emotions ran high because of people's passion for hip-hop culture.

"The reason people got so upset is because people love (hip-hop), and it's the music of several different generations," Franklin said. "It's important that we continue to plow these fields of this new talent and nurture this new talent. ... Under no circumstances would I have been cool with there being no hip-hop at Fondren's First Thursday."

So hip-hop will have a place at FFT, but the controversy has also sparked a conversation about hip-hop's place in Fondren and Jackson. Rollins, who started deejaying 11 years ago and opened Offbeat in 2014 in part so that hip-hop could have a refuge in Jackson, doesn't agree with Franklin that Fondren needs to have a hip-hop presence.

"If they don't want us there, we don't have to be there. It's not necessary for me or hip-hop to be in Fondren's First Thursday," Rollins told the Jackson Free Press. "There's no hip-hop presence there in Fondren, so there's no point in forcing it."

Jason Thompson, who emcees as PyInfamous, said Fondren's relationship with hip-hop is complicated. A decade ago, Chane's shop was in lower Fondren next to Rainbow and attracted white skater kids from Jackson and the surrounding suburbs.

"You had a lot of folks who were identified with the story of hip-hop culture—marginalized, rebellious, poor, ignored. At that point, I think there was a closer relationship. But again, that was before Fondren was a thing," Thompson said.

People assume a natural marriage between Fondren and hip-hop culture because you might bump into your favorite local rapper and other hip-hop heads sipping a latte on the patio at Sneaky Beans. But Thompson, though, says as Fondren developed into the arts district and well-visited destination it is today, it veered away from black culture.

A divide started to emerge not just between hip-hop and Fondren developers and event organizers, but between Fondren and the arts community, he believes.

"Fondren did what places do. Artist support it and give it its life. People start thinking it's cool. Capitalists start thinking they can make some money and say, 'Y'all artists got to leave,' and hip-hop gets lost in that," Thompson said.

In a lot of ways, Chane's decision and Chane himself became a whipping boy for angst over the fear of gentrification in Fondren, and broadly in Jackson. "Hip hop is always going to be transient. People get frustrated from being bounced around from place to place. I don't think people see anyplace other than Fondren and Midtown—if hip-hop is X'ed out of there, where does it go? They feel like if we can't exist here, then we're sort of left out of the equation of the city," Thompson said.

Fondren: 'The Apollo of Hip-Hop?'

For Joecephus Martin, who raps as Skipp Coon, it's less important for hip-hop to be identified with a particular neighborhood, as the South Bronx and Compton, at least at one time, were synonymous with hip-hop music on the east and west coasts. Rather, the culture needs a community-supported space, he said.

"There needs to be a place where (artists) don't have to deal with a whole bunch of questions and deal with the politics of renting a space, which makes it harder to get things done," Martin said.

And when such places, like Seven All Arts Cafe or Suite 106, which Thompson co-owned, have sprouted up over the years in Jackson, people still won't do the show in those venues because of this belief that white people won't come to these places.

"Largely, people want hip-hop in Fondren because Fondren is the cool, new thing," said Martin, who doesn't find it either cool or new. "It is the place we have allowed people to say art emanates from."

There's also a touch of laziness on the part of hip-hop musicians, who Martin believes, think that FFT has a built-in an audience with the power to boost musicians to stardom, that "something magical is going to happen in Fondren because Fondren is nice," he adds, "in quotes."

Martin hasn't seen that play out, though. "I don't know anybody who just performs at Fondren's First Thursday who's the next big thing. I don't know anybody that's come out of there that would lead people to believe you've got to go through Fondren. When did Fondren become the Apollo of hip-hop?

From a public-relations standpoint, the fallout and resolution from Chane's initial decision will likely be a good thing for FFT. Brad Franklin, who is also a marketing specialist for the City of Jackson, said there's already a lot of buzz for hip-hop for the October event.

Chane said that, after his initial misstep, he came to realize that not having key players in the hip-hop world, like Rollins, participating in the event "would be a disservice to the community."

Rollins is taking more of a wait-and-see stance. "If Fondren really needs hip-hop, that's to be determined," Rollins said, but "hip hop won't live or die based on whether it exists at any particular event."

Listen to the JFP Interview with Brad "Kamikaze" Franklin and Ron Chane about the controversy over Fondren's First Thursday and read Adrienne Williams' column explaining why she complained to Chane about the lyrics and what should happen now.