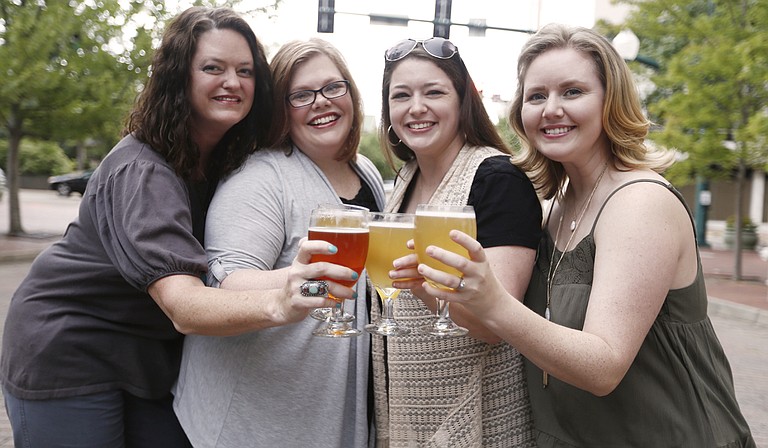 When Toni Francis' husband, T, came home from a trip to Vicksburg, Francis never imagined that one day, she'd become the marketing and events coordinator for the Jackson chapter of Barley's Angels, one of 75 all-female groups from across the world dedicated to craft-beer education.

A native of Greenville, Miss., Francis moved to Jackson in 2005. She says her love of craft beer grew after traveling to Colorado for her honeymoon in 2010, where she and her husband toured different breweries like New Belgium Brewing Co.

In June 2014, six months after she gave birth to her son, Hyde, her husband suggested that she take a break from being a full-time mother and start up a craft-beer club for women after he heard about the Barley's Angels in Vicksburg. In July, Francis started JXN Barley's Angels, which offers a safe, non-judgmental space for women to try out new beer paired with small-plate dishes from local restaurants.

"The whole group is about craft-beer education, socialization with like-minded women and getting out and having a good time," she says.

Barley's Angels meets monthly at various restaurants across the metro. It recently celebrated its one-year anniversary at Hal & Mal's and had its monthly meeting at Deep South Pops. Francis says she works closely with beer representatives such as Derek Nelson from Capital City Beverages to come in to the events and explain what beer the participants are having.

Usually, there are three to four beers from one brewery, and Francis says the goal is to show women they have other options at the bar and they should feel comfortable ordering a beer if they want one.

The shift in the craft-beer market in 2012 flooded Mississippi with 11 breweries, which gave Mississippians more options such as Lucky Town, Lazy Magnolia and Yalobusha brewing companies. Francis says laws like Senate Bill 2878, which raised the alcohol content in beer, and a bill signed by Gov. Phil Bryant in 2013 legalizing home brewing, allowed for the craft-beer market to expand in just a few years.

Francis says half the time, she's just as surprised by the food local chefs prepare as her members. She allows them free rein, and lets the reps talk about the beer.

"The whole idea is that we're teaching people how to understand flavor profiles and give them the language that they can express it into, whether they want to describe it as acidic or malty or fruit-based, so you can really explain to people what you're tasting," she says.

Barley's Angels averages around 25 to 30 women every event. A membership to JXN Barley's Angels is $35 and comes with gear, first choice at special events and volunteering opportunities. Monthly events are open to the public and cost $10 for non-members and $8 for members, or a few dollars more for special events, which helps cover the cost of dinner and brews.   Although JXN Barley's Angels is for ladies only, Francis says she is considering having a co-ed event, just to let the guys peek in on what they're doing.   For her, though, the main goal is to put together the events for women to try new beer and have a good time without feeling pressured to like something they don't, all while supporting local breweries.

Hops: Herb that brewers add to boiling wort or fermenting beer. It gives it a bitter flavor and aroma.

Fermentation: Conversion of sugars into ethyl alcohol and carbon dioxide