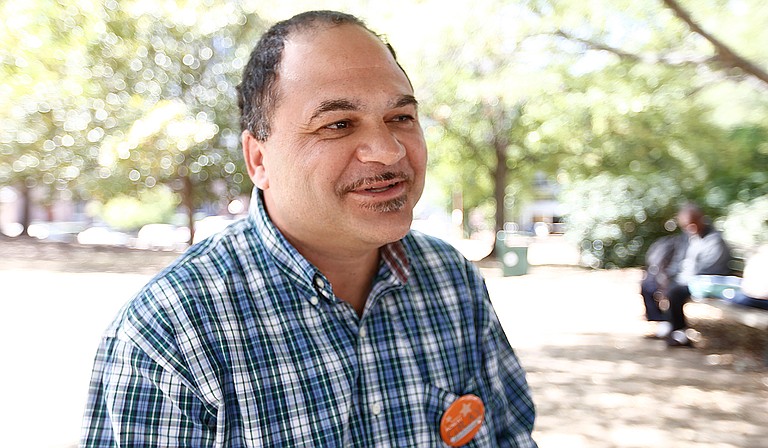 Robert Gray, Democratic candidate for Mississippi governor, ignores the narrative that he cannot compete with Gov. Phil Bryant’s $1.8 million campaign fund because of the free advertising that came with winning the Democratic primary in August. Plus, this time, his mother knows he’s running. Photo by Imani Khayyam.

Robert Gray, the Democratic nominee for governor, says he draws some odd reactions from people.

People he encounters sometimes ask whether he's going to do any campaigning for the state's top office—even while he and his team are out pressing the flesh and passing out campaign literature. Gray, who won the Democratic nomination over two more active candidates by spending no money and not even voting for himself, said another hot topic of conversation out on the trail is incumbent Gov. Phil Bryant's $1.8 million fundraising advantage.

"When I won the primary, I probably got $1 million of campaign exposure from that win," Gray told the Jackson Free Press during a recent interview at Smith Park. "Being on nationwide news like that can't do anything but help."

Since the Aug. 4 party primaries, most local news outlets, as well as The New York Times, have interviewed Gray, who is 46. NBC sent a crew that interviewed Gray in Smith Park, just north of the governor's mansion, and the interview aired on "The Today Show" and MSNBC's "Morning Joe." Plus, Gray recorded a segment for Al Jazeera at the Mississippi Education and Research Complex.

"There's a distinct difference in how people receive him compared to the last four campaigns I've worked on," said Dwight Utz, an engineer who has volunteered on several local races and is working on Gray's campaign. Gray's sister, Angela, is his campaign manager.

Robert Gray: Life on the Campaign Trail as the Democratic Nominee for Governor

Robert Gray, the Democratic nominee for Mississippi governor, talks to the Jackson Free Press about his experiences on the trail.

In Gray's mind, that free advertising has helped attract donations enabling him to crisscross the state to meet voters and talk to small groups of voters, who are still trying to figure him out. Gray grew up in Jackson, where he attended Raines Elementary, Hardy Middle School and Provine High School. He later worked as a courier for Trustmark and, for a time, sold insurance. He then attended Southern Drivers' Academy in south Jackson and started driving a rig in 1992 or 1993, sometimes hauling loads as far away as California. Gray is unmarried and has no children; his own mother thought she was just voting for a man with the same name, not her own son. (She now knows that he is the Democratic nominee, he said).

Despite Gray's failure to do much campaigning, he shocked the political world by finishing in first place in the August Democratic primary, ahead of two women—Vicki Slater, an attorney, and Valerie Short, a retired physician—who actively campaigned for the nomination. Gray's camp says resentment from Democratic officials has been palpable, which might have stymied Gray's fundraising efforts.

To date, Gray had raised approximately $3,300 through the end of September, money he has used to spread his message and slam Bryant's policies, including the governor's resistance to Medicaid expansion and supporting Initiative 42, which would require the state to fund public schools to adequate levels.

"Basically, he's choking the life out of the state of Mississippi by not taking (up) these issues," Gray said about Bryant's refusal to support expansion of Medicaid, which the Affordable Care Act permits states to do, with the federal government paying for the bulk of it.

Bryant has said that he does not believe the Obama administration will pay for the feds' end of Medicaid expansion and, thus, in his logic, leaving Mississippi taxpayers on the hook for the cost of providing health insurance for 300,000 people.

"By expanding Medicaid and starting the health-care exchanges in Mississippi, (it) would create jobs. It would take people off the need for government subsidies. We're losing money and making things worse by not doing anything," Gray said.

The Democratic nominee believes the time has come for lawmakers to start spending from the so-called "rainy day fund." Bryant and the GOP leadership tout filling up the fund as symbolic of their party's championship of conservative fiscal principles. Gray wants to spend some of the roughly $400 million in the account in order to grow and strengthen the state.

Likewise, Gray views full education funding also as a form of economic development. "I think the people of Mississippi already know that it's a win-win situation in passing Initiative 42," Gray said.

Should he defeat Bryant, he said, "I can explain how it's going to help our economy and make them look better."

Rickey Cole, the chairman of the Mississippi Democratic Party, said he won't make any prediction in any race but expects Democratic candidates to deliver some upsets on Nov. 3.

"He's doing exactly what he's supposed to do," Cole said of Gray.

"I think he'll do alright."