Life After the Death of USM Football 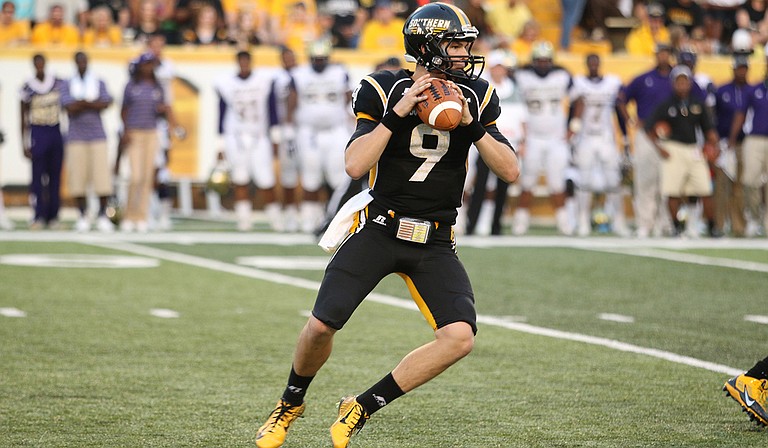 Quarterback Nick Mullens gets some of the credit for helping the University of Southern Mississippi Golden Eagles get back on their feet. Photo courtesy USM Athletics

For fans of University of Southern Mississippi football, 2012 felt like the death of the program, and 2013 and 2014 felt like the mourning period. But 2015 feels like something else.

I wasn't sure in the opener against Mississippi State University, but as the season has gone along, it feels safe to say that it's the rebirth of USM football. By no means are the Golden Eagles back to what they once were, but game days don't feel so morose anymore. Instead, they feel hopeful.

The program is in its new infancy, and the team has learned to roll over and sit up and is taking its first baby steps. The Golden Eagles are still not ready to run, but they no longer need to hold on to the furniture just to get around.

The credit for this rebirth starts with head coach Todd Monken, who has added a nice mix of youngsters, which includes junior-college transfers, to jumpstart the rebuilding process. He has gotten every single player on the roster to buy into his philosophy and vision of he wants the program to be moving forward.

But as much credit as Monken should get, a ton has to go to Southern Miss quarterback Nick Mullens. After taking a beating for two straight years, he is now staying upright and rewarding his coach with good decisions and solid play in his third year as the starter.

The Southern Miss offense has gone from near the bottom of the conference in every statistical category to near the top. Last season, the school was No. 12 in scoring offense (19 points per game), No. 8 in total offense (451.4 yards) and last (No. 13 in C-USA) in rushing (95.8 yards).

USM has already won more games this year than they won the last three years combined, with four games left this season. At five wins, the Golden Eagles are one victory away from bowl eligibility.

All four remaining games are winnable, starting with University of Texas at El Paso Saturday, Oct. 31, at USM's M. M. Roberts Stadium and ending with a trip to Rice University, a home game against Old Dominion University and a road battle against Louisiana Tech University.