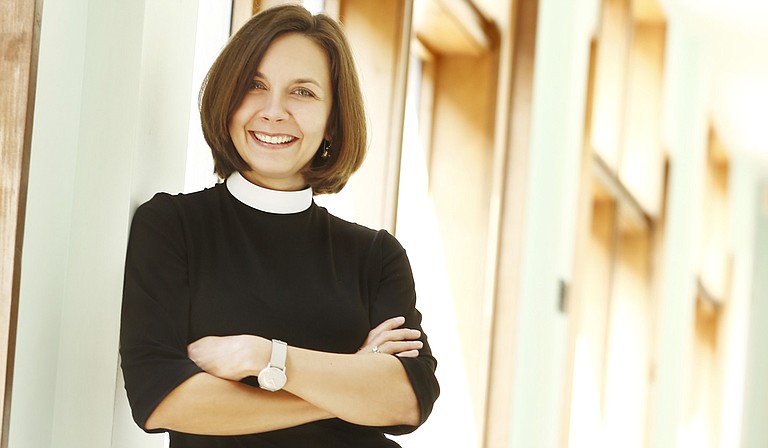 As a little girl in the Episcopal church, Hailey Allin remembers one Sunday more than the rest. After the service, the priest asked her to close the velveteen rope that marked off the sanctuary. She remembers fastening it in the empty church and feeling like she wasn't alone.

"I was aware of a presence there that has stayed with me all my life in good and bad times," she says. "And sometimes that presence feels like it's far away, but I've never felt it to be gone."

Allin can't remember what side of the rope she was on when she closed it, and she has found meaning in trying to figure out what side of the railing she is called to be on throughout her life. A Meridian native, Allin went to Vanderbilt University and graduated with her bachelor's degrees in human and organizational development and English.

Soon after graduation, she married Jack Allin, whom she met at an Episcopal summer camp in college. The couple married at St. Andrew's Episcopal Cathedral in Jackson, which Jack's family attended. Due to his work as an architect, the couple soon moved to New York City. Allin enrolled at New York General Theological Seminary from 2002 to 2005, but after graduating with her master's degree in divinity in 2005, she held off ordainment—not a popular choice for recent seminary graduates.

Ten years later, Allin is in the midst of completing a doctorate degree of theology in pastoral counseling at Emory University. The Allins moved back to Jackson in 2012 and now live in Belhaven with their two children (John Maury is 8, and Sarah is 5). Allin was ordained as a deacon at St. Andrew's in June, and in January, she will be ordained as a priest.

"When I started working as coordinator of lifelong formation (at St. Andrew's) even though I wasn't expecting it at all, working here has opened me back up to thinking about ordination again," Allin says.

Allin's studies in psychology and counseling represent her strong suit in her ministry. Other St. Andrew's staff members call her the "hovering glue" that holds the different pieces of the church and programs together.

"Being in people's lives in their joys but also in their struggles and sorrows and heartaches has always been something I've been drawn to," she says.

Allin sees people's struggles as several states intervening: the spiritual, emotional and physical. Psychology and spirituality are two sides of the coin, but they need to be integrated in understanding, she says. The tension fascinates her and has led her down the road of her doctoral studies and now ordination. She is excited to be back in Jackson and wants to put her energy into connecting with the community, as she plans to stay a while.

"There's something about Jackson that gets in your soul whether you like it or not," she says.