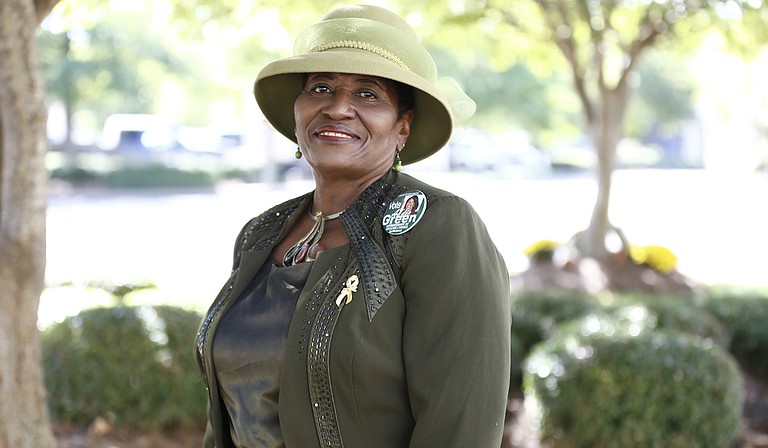 Addie Lee Green, the Democratic challenger for the Mississippi Commissioner of Agriculture and Commerce seat, said she wants to bring farming back to young people. Photo by Imani Khayyam.

Raised on a farm and the daughter of a sharecropper, Addie Lee Green remembers learning how to chop down trees for firewood as a child. Now she is running to become to the state's commissioner of agriculture and commerce.

Green grew up in Raymond, attending Southern Labor School and the JPS Career and Development Center. She volunteered with the Child Development Group of Mississippi in the 1960s as a teenager, working with the Head Start program during the Civil Rights Movement.

Green also studied social work at Jackson State University through a program that enabled her to work in the local neighborhoods. She worked at General Motors in Clinton and with the AFL-CIO to help organize the local Packard Electric union. Green holds certifications in floral design, communication and CMO (public and elected official training) areas.

Green has served as an alderwoman on the Bolton council. She has two adult sons (her third son died in 2006) and six grandchildren. She lives in Bolton with her German shepherd mix, Brownie.

Why are you running to be the commissioner of agriculture and commerce?

One of the things I want to do is to make sure (the state) establish(es) curriculum that allows our young people—future leaders of tomorrow—to be able to really learn about farming so they can open up their own market and be their own producers. That's one of my pet peeves (and reasons) as to why I'm running is to allow this state to go back and revisit a curriculum that deals with farming, teaching our young people how to farm because ... once you get your education and you can use it in (multiple) areas.

Agriculture I can appreciate because you can come from food, pulp wood, you can go to open up a factory in potatoes or sweet potatoes and open up your own cooking area. We can (also) go back to canning. With the climate change approaching all of us, we need to teach our young people how to can fresh vegetables so that they can have something to feed their family before they get to go to the store and when (they) do not have any food at home. They are talking about 600,000 starving young people, families and children in Mississippi. There's no reason why we should be starving when God has blessed us with land, the Delta land, the free land (where) you can grow potatoes, peanuts, tomatoes and open up farmers markets. Our young people can have jobs during the summer, so that's one of the reasons I am running.

The Republicans think that they are moving the state forward, and in their minds they are, but having President Obama as the president of the United States, I don't see the agricultural commissioner doing enough. The complaint is minority farmers did not get any of the farmers' money (federal grant money). And that is the complaint (I hear) as I go around the district that they didn't get the grant that was appropriated for what they call "Black Farmers." So my announcement for them is to check with Congressman Bennie Thompson to find out why Mississippians, those that applied, why haven't they got that farmers' money?

So if you were elected commissioner, how would you work to get that money?

We need this money, and everybody needs to be able to sit down around the table (and figure out) how they will fill that application out because I think that was the glitch—being able to prove that they were denied the opportunity of being able to get a grant or a loan by the bank.

If you're elected how would you stimulate a farming economy here?

Mississippi deals with the world and its regulations, so what I would do is I would first start with our legislators, our local communities, our churches, schools and nonprofits to give incentives on training. Don't let me leave out the school boards, to allocate a budget that will start the process of Mississippi being able to grow fresh vegetables and start with our young people from a classroom perspective.

What would your main focus be if you're elected?

I would do more (agricultural) training. I think I would present my proposal before the state Legislature and the federal government (Congress), and I would allow not only the schools but (also) nonprofits to be able to start training and give them an incentive for our grant process. We've got Alcorn State University able to train (agriculture), but I would also look at the Mississippi state penitentiary so when those persons have done their time that they can come back and make a living instead of going back to prison, come back and have a job that is trained before they leave.

So you would look at introducing agricultural training in prisons?

Yes. In my campaigning, a lot of young people have felonies, and they are just hustling. They are hustling, and sooner or later, they will be returning. So I would like to see Mississippi train them in the classroom, so they can see a future and work the future.

How would you have handled the state fair security situation?

I would pay Jackson a big sum of revenue to house the Mississippi State Fair, so that they would not be in a crunch. This year, they had a glitch about security for the state fair, and I would work out the security and put monies back into Jackson because the fair makes money. Then I would have Mississippians bring down produce to the fair. I would make (the fair) more homegrown for whatever they were producing.