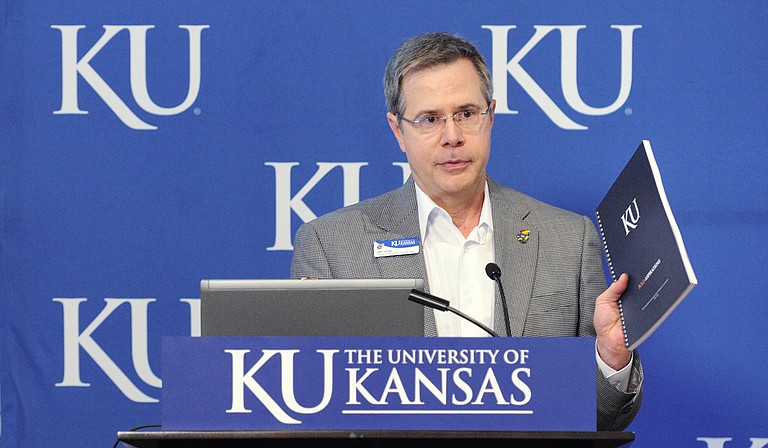 OXFORD, Miss. (AP) — Jeffrey Vitter, named as trustees' top pick to become the next chancellor of the University of Mississippi, says the problem solving of computer science informs his approach as a college administrator.

"Computer science, at its core, is about solving problems and finding solutions, and that's what higher education administration is about," Vitter said in a telephone interview Monday, Oct. 19, with The Associated Press.

He said he withdrew from the search to lead the University of Arkansas because of his interest leading Ole Miss, which has 24,000 students in Oxford, at the University of Mississippi Medical Center in Jackson and elsewhere.

"It's a wonderful opportunity," Vitter said. "Particularly with Ole Miss, I'm a southerner. I grew up rooting for SEC football. Ole Miss is a gem of a university. It's grown a lot; it's very popular with students; it's a real driver of the state's economy."

Vitter is scheduled for Oct. 29 campus interviews with students, faculty, staff and alumni. If all goes well, trustees are likely to hire him that day. It would be the capstone of a career that has led him through the ranks of dean of the College of Science at Purdue University, then to provost at Texas A&M University, and to Kansas, where he oversees campuses in Lawrence and Overland Park.

If he takes over at Ole Miss, Vitter will inherit a university that still lives in the spotlight of racial issues, more than 50 years after federal troops put down violent protests against integration, paving the way for James Meredith to attend class. He said he's committed to diversity, citing a hiring process that he has implemented at Purdue and Kansas that has led to more women and minorities being hired as faculty.

"I'm very supportive of what the students are doing this year in terms of talking about the issue of the flag and having that discussion," he said.

Ole Miss is searching for a new chancellor because trustees refused to renew the contract of Chancellor Dan Jones, sparking broad protests. Vitter said he respected the work Jones did, and said he had inquired into Jones' exit, but said he was won over by trustees and university members on the search committee.

"I was just overwhelmed by the enthusiasm and professionalism of the board and the search committee," he said.

As provost at Kansas, Vitter said his top achievement is a strategic plan that brought a core curriculum to the university and advanced scientific research.

Vitter said university leaders had tried unsuccessfully twice in the previous 20 years to implement a core curriculum. This time, though, the university has implemented a plan requiring students to take courses or complete field experiences collectively completing six goals before graduating. Vitter credits the success to a broad consensus that was built from the bottom up.

"It's our mechanism for transforming the university," he said. "It's centered around a truly shared vision of excellence and we went to great lengths to get everyone together."