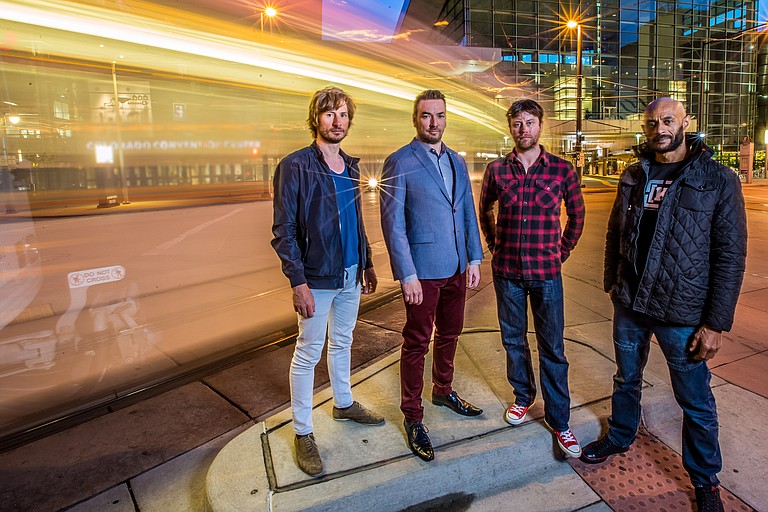 Eddie Roberts, guitarist of British funk band The New Mastersounds, can attest to the fact that a lot can change in 16 years. He first formed the group while running a dance club called The Cooker in the city of Leeds, England, in 1999 during an upsurge in the popularity of soul and funk music. Most nights of the week, Roberts says, you could walk into a club and find 500 college kids dancing to deejays spinning classic records. At the time, The New Mastersounds were tailor-made for that crowd, but British club-goers soon moved away from that style. Thankfully, American audiences hadn't.

"We came to the U.S. in 2004 and played in Chicago, and we were opening for the Greyboy All-Stars, who were doing kind of like their comeback tour," Roberts says. "And it was two nights sold out with the Greyboys—and I actually knew them from them playing in our club in '96 in the U.K., so similar kind of genre. We saw 1,000 people every night, going crazy to this music, and we were like, 'OK. We need to be playing in America and not in Britain anymore.'"

The New Mastersounds, which include Roberts, drummer Simon Allen, bassist Pete Shand, and keyboardist Joe Tatton, who stepped in after musician Bob Birch left in 2007, have changed a great deal since their early club days. For one, Roberts has lived stateside since 2010, recently moving to Denver after three years in San Francisco and almost two in New Orleans. But the band has continued to write and perform regularly despite the distance, as its 10th studio album, "Made for Pleasure," released Oct. 2, proves.

"We just have to approach it in a different way," Roberts says. "We'll get like a couple of anchor dates, and then we fill in between. We'll be out for two or three weeks, where I see a lot of U.S. bands say, 'Oh, we can make bank playing New York Friday and Saturday and just head for home.' We can't do it like that—we have a lot of expenses in terms of international flights and things. But we've made it work, and it's working better than ever right now."

The New Mastersounds recorded "Made for Pleasure" in New Orleans in January of this year, bringing in special guests such as renowned percussionist and vibraphone player Mike Dillon, "American Idol" season-three contestant Charly Lowry, and Roberts' West Coast Sounds, a horn section the guitarist formed in San Francisco. The record is also the band's first official U.S. album, released through Brooklyn, N.Y.-based label Royal Potato Family, which Roberts says has made a huge difference in getting "Made for Pleasure" into peoples' hands.

"The funny thing is, when you're releasing stuff from the U.K., and it ends up with an import price, record stores just don't want to stock it," he says. "They could buy a Sharon Jones album for 10 bucks or a New Mastersounds album for 25 bucks. It doesn't really work for them."

Roberts says that one thing that has struck him about funk music is that it has survived for so long, even in periods where audiences weren't as interested. For he and the other members of The New Mastersounds, the genre hasn't lost any of its effect, although he can't exactly put a finger on what that is.