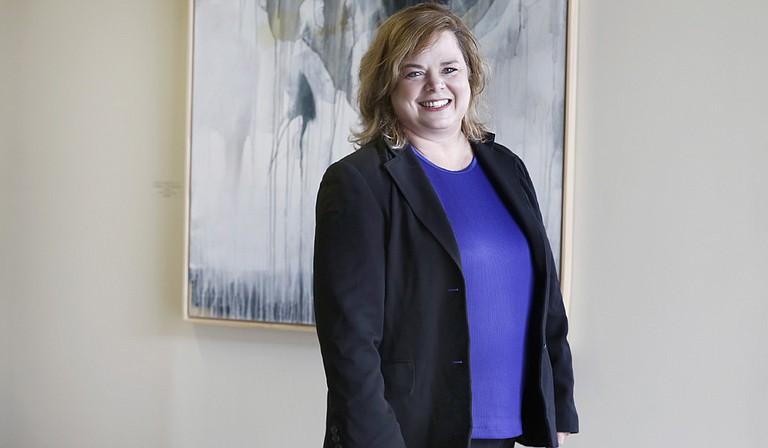 Charlette Oswalt, 49, the Republican nominee for Hinds County sheriff, said the county could save money with alternatives to jail, such as electronic monitoring and weekend work programs. Photo by Imani Khayyam.

When Charlette Oswalt was in third grade, her class's President's Day assignment was to make a silhouette of either George Washington or Abraham Lincoln. Oswalt went with Lincoln—and says she's supported the Party of Lincoln ever since.

"His beliefs and values are why I've always aligned with the Republicans," Oswalt told the Jackson Free Press.

Now Oswalt, 49, is carrying the GOP banner into the race for Hinds County sheriff, where she is running against two independents and Victor Mason, a Democrat. Oswalt's law-enforcement resume began in 1987 as a probation and parole officer for the Mississippi Department of Corrections. In 2002, she joined the Hinds County Sheriff's Office as a deputy, where she spent about three years before going to work for the Hinds County Circuit Judge L. Breland Hilburn and then the Mississippi Supreme Court.

"I believe Hinds County is in a crisis when it comes to the sheriff's department and our jail, but I also know it's correctable and fixable," Oswalt said.

She recently met with the Jackson Free Press about why she should be Hinds County's first woman sheriff.

What are your thoughts on the lawsuit against the City of Jackson for incarcerating people who can't afford to pay their fines?

I think there are lots of alternatives that we can find. There are lots of places that do weekend work programs, where people don't have to lose their jobs, and it doesn't cost the cities to house and feed them—cleaning of the sides of the roads and overgrown lots. It would have to be with (the City's) approval; the sheriff doesn't make that call.

Generally, what are some ways to reduce the jail population?

People don't have the money for fines, but (on the other hand) the city needs the money. But there's work release programs. You could do an electronic-monitoring program where they're at home responsible for their own health care, their own food, and the city's not having to pick up the expense. This county is behind the times when it comes to alternative housing.

What do you mean?

For example, a lot of counties run their own home-monitoring programs. It's basically a probation at home, where an offender—and of course these are nonviolent crimes—can go to work, maybe work off their fines and a portion of their (pay)check is given to their fine, and they're not taken away from their families. Again, the city's not incurring the expense of housing them.

Is that something that the county or sheriff would run?

It would take some tweaks in the laws, but I would be all for the sheriff's department running that. Far too many times, you see people incarcerated simply because they don't have the money to pay off a fine. The (solution) is not keeping them incarcerated. It's getting them back (to) where they can get the tools they need, whatever they're deficient in to get them to be a productive citizen. Let's get them in those programs, let's get them in a situation where they can find the means to support themselves and pay off their fines, and they become less of a (financial) responsibility. A lot of people are raised to expect to go to jail one day, and they don't know there is a different option.

It's got to be the No. 1 priority. I believe that starts with putting visibility of the sheriff's department back throughout the county, both in the incorporated areas and the unincorporated areas. That police presence is first and foremost. Then, I think you've got to start assessing what the issues are based on the crimes being committed. Once you complete that assessment, if you see that it's young people that don't have any supervision, and they're out doing things out of lack of more constructive things to do, then you address that problem. If it's drug issues, then we address those problems. Law enforcement is not static; you have different influxes of crime based on different things that change throughout society.

How do you address youth-involved crime?

I think we've got to get with our faith-based organization. We have got to partner up with our individual communities—neighborhoods, schools—and what programs we have already that can address those problems with our youth, and then let's find out where we're deficient, and let's bring those programs in. Mental health is an issue with our youth that hasn't been addressed. I'm a single parent myself, so single-parent homes when you're trying to keep the lights on and a roof over the heads, maybe you don't always know what your adolescent children are doing. When I was with probation and parole, I had several offenders (whose) parents didn't even realize the people they were hanging out with were leading them down the wrong path, and they made some bad decisions. So we've got to get those parents involved, however he have to do that.

Parents often get blamed, but how should law enforcement work with parents in ways that aren't punitive?

We need to provide some training or education to our single parents—go where they are, in the places and (at) the times that are convenient for them. Our youth are exposed to so much these days with technology and social media that it's hard for anybody to keep up with what's going on. We've got to do our part to make them aware of the trends we see in social media, (and) the knowledge we have of what's going on with our young people.

Earlier you mentioned redeploying resources throughout the county. The idea is that the sheriff's department can help reduce crime by adding a layer of visibility to JPD patrols, for example, but then maybe that leaves parts of the county less protected. How do you manage resources?

The key to that is meeting with all the mayors of the incorporated areas, the leaders of the unincorporated areas and finding what their needs are. And maybe the City of Jackson doesn't need help during the day; maybe they need more help on the weekends. Maybe the town of Utica needs more help at the first of the month.

One of the things the U.S. Justice Department mentions is people at the jail being held past their release dates. What will it take to change that?

The sheriff is basically the hub of the wheel. ... The sheriff has got to let the courts know what's going on. You've got to have checks and balances. You've got to have an open line of communication with the courts and (district attorneys) and even the Jackson Police Department. If you don't have that open line of communication, (prisoners) don't get moved, people forget them, and they get lost in the system.

How to you keep up morale among the rank and file—deputies and detention officers?

My answer to that (is) from a managerial level. Typically, you see your sheriff's department as top down. I think we're at a point where we have to have bottom-up communication. You've got to open up your ears. You've got to provide the tools that they need, they've got to feel like they've got support. You've got to get to know your people. You can't expect someone to do a great job for you on the pay these people are getting when you don't even take the time to get to know them.

How would you describe your management style?

I believe I'm a hands-on manager. I want to be side-by-side (with) my people. I want to know them (as) individuals. I want to grow my staff. One day, my desire for the Hinds County Sheriff's Department is for people to say, "Wow I'd love to have an employee from there."