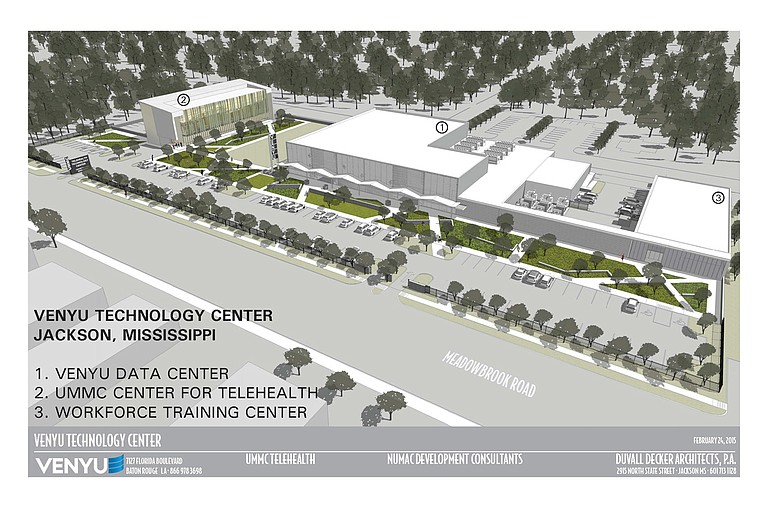 The lot where the old McRae’s building stands on Meadowbrook is set to house a new data center and the UMMC Telehealth Center, but the project needs state historic tax-credit funds in order to proceed on schedule. Photo courtesy Duvall Decker Architects

A new Fondren development project promises to renovate an empty McRae's space on Meadowbrook Road and address the longstanding problem with flooding, overflow and drainage from Eubanks Creek within a year. That is, if the project can secure a possibly elusive historic tax credit from the state in 2016.

Venyu Solutions LCC, a tech and data company based in Baton Rouge, La., began demolition inside the 67,000-square-foot former McRae's building at the corner of Meadowbrook Road and State Street during the last week of September. Venyu is working with the City of Jackson to transform the old department-store space into the company's fourth state-of-the-art data center, part of which involves a contract with the University of Mississippi Medical Center to help construct and power its Center for Telehealth in a new building adjacent to Venyu.

Tommy Curb, vice president of business development at Venyu, told the Jackson Free Press last week that the project is still in phase one—demolition—and hopes to have completed construction and be up and running within a year's time. The actual timeframe for Venyu's operation will depend both on how smooth the demolition and construction phases go, as well as the securing of a historic tax credit from the state to cut down on the project's $35-million estimated construction costs.

State Sen. David Blount, D-Jackson, said the dollar-amount cap for existing tax-credit projects has been reached. That means that "no new credits can be awarded" unless the state Legislature votes in 2016 "to increase the authorization to allow for more credit for renovation and rehabilitation of historic properties all across Mississippi."

"(The tax credit) is certainly a job creator and a tax-revenue creator, in terms of putting properties back on the tax roll," Decker said. "I think the powers-that-be get that, but they have to act on that in the coming legislative session to restore that money." The funding ran out and was not renewed in 2015.

Venyu is in the process of submitting its application to the state, which involves detailing project expenses so that the state can "determine what actually qualifies for historical tax credits," Curb said.

The final step, actually receiving the credit, is therefore dependent on both the Legislature's decision to increase historic tax-credit funding in 2016, as well as Venyu's successful application and completion of the project. The ability to apply for a historic tax credit was a major incentive for Venyu to come to Jackson, so while the company expects a successful application, not receiving it would be "greatly problematic," Curb said.

"Venyu could easily go to the suburbs and build or buy, and it would be much easier" than redeveloping a historic structure, Decker said.

But, Decker added, "Venyu is committed to inner-city redevelopment and to the community of Jackson."

Decker said practical considerations such as proximity to UMMC factor into Venyu's desire to be in Jackson.

"The tax credits make it financially feasible (for Venyu) to be committed to those things," he said.

Venyu and the future telehealth building will benefit from the City's plans to reconstruct Eubanks Creek in 2016 to ensure a functional parking lot and a safe area nearest the creek. Yet, Curb said, creek developments would not affect Venyu's own data center-operations. Local residents and those who work in the area, he said, will be primary beneficiaries of the funds and personnel the city has already allocated to address the problems.

Decker says that when the project leaders became aware of how the City's construction and maintenance around Eubanks Creek were contributing to drainage and overflow problems, they negotiated with the City to get the bridge removed and the channel widened, and hired hydrologist Bill Colson of Aqua Engineering Services to redraw outdated FEMA floodplain maps for the area.

Now that the floodplain maps are updated, and the City has agreed to carry out maintenance and construction on the creek, FEMA's "conditional approval" to go ahead with the project in 2016 is needed. Once the project is completed, the organization will adopt the new flood-plain maps, which will also affect flood insurance for home owners in the area, Decker said.

"Our initial thoughts were just to build a data center," Curb said. "It's been a team effort, supported by the mayor, the City, the State and UMMC."

City Engineering Manager Dr. Charles Williams has been working with Venyu and the City to make sure the flooding and drainage issues are on the radar for local government in 2016.

The 1-percent sales tax will help with project costs, and plans are in place to hire a "design consultant" by the new year to survey the area and offer the best solutions moving forward.