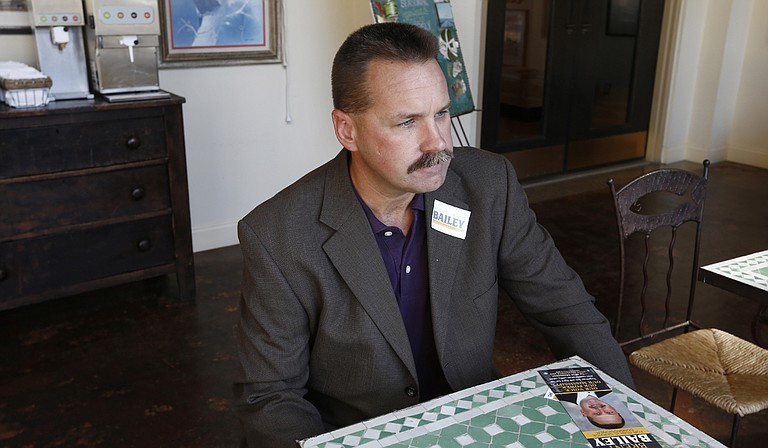 When listening to Brent Bailey extol the virtues of alternative energy, biofuels and improved efficiency standards, it's easy to forget that he's a Republican running for the Mississippi Public Service Commission from the Central District.

"I see it as a tremendous opportunity to increase our energy security and diversity. I see it as a great way to build and create jobs and to give individuals choice. That's the base of free-market conservative principles," Bailey, 44, told the Jackson Free Press.

A Madison County resident, Bailey has never held or run for office before this year. In November, Bailey faces retired financial investment adviser and veteran legislator Rep. Cecil Brown, D-Jackson, to represent 18 counties on the PSC, which regulates utility companies in the state.

Bailey is the southern region representative for the 25 x '25 Alliance, which advocates for sustainable energy policies in the face of global climate change and, specifically, to get 25 percent of America's energy from renewable resources like wind, solar, and biofuels by the year 2025.

Bailey recently talked with the JFP about his candidacy, the Kemper County energy facility and Mississippi's energy future.

Tell me about your work with the 25 x '25 initiative

I've been with 25 x '25 for 10 years now. The initiative focuses on advancing clean energy solutions with a focus on rural America, providing the tools, programs (and) services that allow our nation's farmers, ranchers, and foresters to invest in clean energy and provide new technology opportunities.

Is this initiative specific to Mississippi?

We're based out of (Washington) D.C., and I represent our nation's forestry and (agricultural) producers to try to educate them and help build awareness on how they can invest in clean energy and contribute to our nation's energy portfolio.

What are the renewables trends?

(With) biofuels, we're still in the first phase ... which is corn ethanol and soybean oil to biodiesel. The next generations are beginning to come along. The technologies are becoming much more mature. There's still that financial aspect—given where price margins are now, with oil (prices) down—where (energy producers) are having to become more efficient in their operations.

We're talking about technologies that are just in the last few years moving from laboratory to demonstration-scale to full-commercial scale. You're starting to see these open up in Iowa, in Kansas, other places around the U.S. that are just getting to these commercial-scale applications of second-generation and even third-generation technologies.

We're moving beyond corn ethanol. While (ethanol is) really the foundation of biofuels in the U.S. and created an awareness for consumers, the next generation provides a much smaller carbon footprint and greater efficiency and more opportunities.

Do you think that negative experiences with failed companies like KiOR and Solyndra have tainted people on alternative energy investments in the future?

Some of these were risky ventures, risky technologies. Sometimes, you bet big, and it might not work out. The big question is: Are you using government dollars to fund those risky investments, or is this coming from the private sector? Are they putting their financial interests on the line? I guess that's what may taint the average citizen or taxpayer.

Net metering and some of these other things are creating choice for consumers to decide if they want to invest themselves in these applications—whether it's rooftop solar, small-scale biomass (or) combined heat and power applications to create efficiencies in their use.

There are proven applications that, in my view, are winners and create positive impacts.

Should the government have a role in these kinds of investments?

I definitely believe there is a role, but I think we need to be careful in our due diligence in how we evaluate the technologies, to what level of investment we're willing to look at and (whether) the market's truly there for the finished product, and what are the overall benefits for the citizens of Mississippi going forward. Is our goal diversification? Is our goal new business opportunities? Job creation? And how does that all factor in the cost benefits of what ventures we're assessing.

There's been a lot of second-guessing of the Baseload Act. Does it need more review?

The intentions were to help reduce the financing costs of reliable off-the-shelf technologies that provide immediate benefits as far as expanding capacity, providing new generation resources. I don't think it should be applied in a manner such as we're seeing right now over in east-central Mississippi (with the Kemper County power plant).

We're talking about a very risky technology, and (with) advanced cost recovery you're putting more of the burden and the risk on the consumer with a technology that's not been proven. So I see the pros and cons. If used wisely, the Baseload Act may be a useful mechanism to reduce the overall burdens and costs of consumers. In a case like this, I believe it's been used unwisely to facilitate a risky investment and venture. It definitely doesn't appear to be a wise application of policy in this matter.

What are the most concerning aspects of the Kemper project?

I've been concerned about it since day one when I first heard about it. I've never felt the technology was ready, particularly for commercialization. I always thought there were more cost effective alternatives and opportunities out there that were not explored and not part of the conversation—investing in energy efficiency being one of those.

If we truly needed new capacity, we could achieve that by freeing up capacity with much smaller, targeted, smarter investments in energy efficiency—whether it's helping our residential, business, or industrial in reducing their needs and saving them money and saving capacity on the grid that doesn't require expensive investments in brick-and-mortar-based generation. It's been proven time and time again that smart investments in energy efficiency provides returns on investments three to four times the initial investment. We've seen construction delays, significant cost overruns. It was never in my view the right choice for consumers and in the best interests of consumers.

How would you vote today—is Kemper prudent or not?

What do you want the PSC to focus on when Kemper is off its plate?

I would like to engage in integrated resource planning: you put everything out on the table ... for the public to see. Is it smart investing in natural gas generation? Nuclear? Clean-coal technology? Renewables? Efficiencies? How do (we) provide reliable energy at affordable prices that are accessible to everybody looking five, 10 and 20 years down the road?