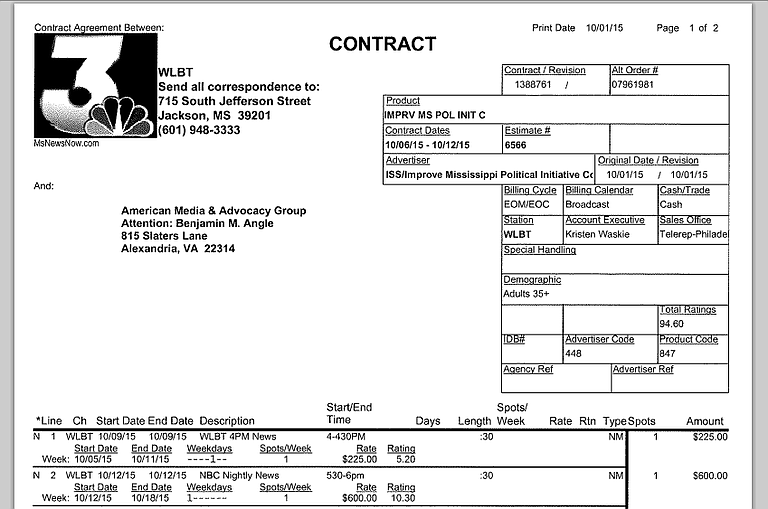 As the November election draws near, large political advocacy groups and Republican donors' dollars are pouring into anti-Initiative 42 Political Initiative Committees (PICs), mainly the KidsFirst and Improve Mississippi committees. These two groups alone have raised more than $300,000 in the past few months to try to defeat the citizens' initiative to force state lawmakers to follow the law and fully fund the Mississippi Adequate Education Program.

Improve Mississippi has launched the most visible anti-Initiative 42 campaign, sponsoring a television ad and a new website, 42truth.com.

After document filings on Friday, it’s clear where the money to defeat the education-funding effort came from. The PIC reports donations of just over $200,000 in 2015, and claims on its Oct. 9, 2015 report to have spend almost none of it, although television ads bearing the group's name began appearing around the first of October.

The Improve Mississippi political initiative committee originally surfaced in leaked emails from Jones County Junior College President, Jesse Smith, who urged other presidents to donate to the PIC in September. Donors are mainly local Republicans and industry groups, including donations from the campaigns of Gov. Phil Bryant, Lt. Gov. Reeves, House Appropriations Chairman Herb Frierson and House Speaker Philip Gunn. Each of those campaigns have donated $10,000 to Improve Mississippi.

Empower MS PAC, the political arm of the “school choice” foundation by the same name, similarly contributed $10,000 to Improve Mississippi.

Van White, the PIC’s treasurer, did not respond to messages or emails for this story. White, a Moss Point native who graduated from the University of Mississippi in 1986, took over the presidency of the Business and Industry Political Education Committee, or BIPEC, in 2008, the Mississippi Business Journal reported. Prior to that, he was a campaign consultant at Southern Research Group and spent a decade with Raytheon Aerospace Services.

BIPEC, which scores legislators on conservative business ideals, is not set up as a political action committee, and MBJ reported that it does not lobby or campaign for any particular issue, although its representatives meet with legislators to ascertain and evaluate their positions on issues that concern its members, as well as monitors the election of members of the Mississippi Supreme Court and other state judges.

White's group does have a PAC arm, however. "The Improve Mississippi Political Action Committee, or IMPAC, is a political campaign sister of BIPEC and often uses these grades and information to identify and target and assist business friendly candidates," former Mississippi Republican Party Political Director Brian Perry wrote in a column in 2013. "But BIPEC itself does not get involved in campaigns directly."

What’s not clear from Improve Mississippi’s Oct. 9 disclosure is how it has spent its money so far; apparently, its spending began in earnest in October.

WLBT FCC disclosure forms and advertising contracts (here and here) listed "American Media & Advocacy Group" as the media buyer for Improve Mississippi advertisements that aired from October 2-11 during shows ranging from the NBC Nightly News to something WLBT lists as “Pre-Season Football” (although presumably that’s Sunday Night Football). Total cost for those nine days of ads was invoiced at $13,800.

The Improve Mississippi’s Oct. 9, 2015 Secretary of State disclosure form showed a total of $150.16 in disbursements for the entire calendar year through the end of September.

American Media and Advocacy Group LLC emerged in 2012 as a top media buyer for a bevy of conservative issues advertisers in the 2012 election. The group seems to prefer staying in the shadows, as it appears to have no Web presence, and is listed by Bloomberg.com and elsewhere as a privately held “telecom carrier” business. A 2013 NBC investigation found that American Media and Advocacy Group came in No. 5 in media-buyer expenditures ($27 million) in the 2012 presidential election.

Data searches show that American Media and Advocacy Group is housed in the office of Robin Roberts' political-media firm, National Media Inc., in Alexandria, Va. The media buyer who signed the WLBT order for the television ads of Improve Mississippi, Ben Angle, is listed on the National Media website as an employee of that company.

Sourcewatch.org, an online transparency website, reported in the past that CEO Roberts, whose LinkedIn page says has owned the firm since 1981, was the media buyer for the 2000 Bush-Cheney campaign. Sourcewatch reported that the firm has also produced many ads for Citizens for Better Medicare, which supported the pharmaceutical lobby's effort to avoid lower prescription-drug prices.

While Improve Mississippi—for which American Media produces and places ads against 42—seems to be the local bundler for cash committed against Initiative 42, the KidsFirst Mississippi Political Initiative Committee, formed on July 31, 2015, is financed by exactly two donors: its director, Russ Latino, who put in $3,176.62 this year, and the Koch brothers’ national Americans for Prosperity, which donated $119,370.38 between Sept. 16, 2015 and Sept. 30, 2015.

Latino, the Mississippi director for Americans for Prosperity, is also the director for KidsFirst Mississippi and two other PACs, Forward Mississippi, which donates money exclusively to Republican candidates, and RUSS PAC, which was formed in 2010 and has two reports in 2011 on the Secretary of State’s website.

Latino did not return messages or respond to the Jackson Free Press for this story.

In August, the KidsFirst Mississippi PIC had received $1,000 from Americans for Prosperity, enough to pay for a Phil Bryant radio spot that features Bryant’s stance against Initiative 42. In the 30-second radio ad Bryant says, “If 42 passes, a judge in Hinds County will control our schools. Our children’s future and billions of taxpayer dollars hang in the balance—Deborah and I are deeply committed to public education but 42 is bad for our kids and bad for our economy.”

Expenditures for the Bryant ad do not appear on the KidsFirst August or September reports on the Secretary of State’s website. (The group is also apparently buying Google Adwords advertising for keyword phrases such as "yes on initiative 42," at least as of this writing.)

Brothers Charles and David Koch, the principal owners of the oil and chemical conglomerate Koch Industries, founded Americans for Prosperity in 2004 and have had heavy hands in other education-related elections across the United States. In Denver, Colo., the organization has funded candidates for county school board positions in an effort to effect changes to curricula and to support "school choice."

The “school reform” agenda of organizations like Americans for Prosperity is affecting policies in Nashville, Tenn., as well. There the Charles Koch Foundation held an event in 2014 titled, “Education Opportunities: A Path Forward for Students in Tennessee,” to provide an “in-depth policy discussion” about public education and other issues.

Documents filed Friday showed that the pro-Initiative 42 campaign, Better Schools Better Jobs, has raised a total of $1.292 million in 2015. The largest donors include Dick Molpus and Jim Barksdale, both Mississippi natives and businessmen who support public-education funding. The W.K. Kellogg Foundation, which has targeted Mississippi as one of four focus states where it funds programs to help vulnerable children and families, donated as well.

Molpus, a Democrat who started Parents for Public Schools and was on Gov. William Winter's staff when education reform passed in the state, is listed as the chairman on documents in WLBT's public file for ads run in favor of Initiative 42.