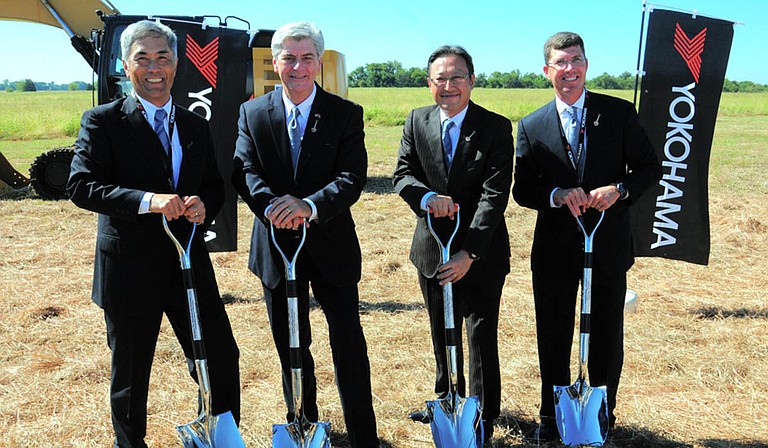 WEST POINT, Miss. (AP) — For Yokohama Rubber Co., its $300 million Mississippi plant is its platform to fight for a slice of the competitive North American tire market.

For West Point, the plant is a ticket out of the economic doldrums that have plagued the northeast Mississippi town of 11,000 for nearly a decade.

Company and state leaders planned to gather Monday to dedicate the plant, which has hired about 260 people so far out of 500 promised. Tadaharu Yamamoto, president of the Japanese tire company's Mississippi branch, says it will take up to two years to reach yearly capacity of 1 million truck and bus tires.

Yokohama has plans for three more phases beyond the 1 million square-foot building it constructed in a pasture north of the town. If all four phases are built, the company would invest a total of $1.2 billion and hire 2,000 workers.

That would be a big boost to West Point, which suffered from sky-high unemployment after Sara Lee closed its traditional cornerstone—the Bryan Foods plant—in 2007.

Mayor Robbie Robinson said that although Yokohama hasn't completed first-phase hiring, its arrival spurred a turnaround in how residents feel about West Point. "Now we have hope again, and an economic future in our community."

Mississippi spent $70 million to incentivize the first phase, along with $12 million by West Point and Clay County. Total state and local incentives, including tax breaks, could total more than $330 million for all four phases.

Mississippi Development Authority Director Glenn McCullough Jr. hopes to showcase Yokohama's success when he travels to Japan and South Korea later this month to recruit other businesses. "I think you can make the case that Mississippi is competitive on a global economic development stage," McCullough said.

Gov. Phil Bryant's Chevrolet Suburban rolls on Yokohama tires as he touts an improving economy in his re-election bid. But the company will need to grab more of the North American market to fulfill its broader expansion plan.

In 2014, North America accounted for less than 10 percent of Yokohama's sales. Yokohama aims to increase sales here as it builds worldwide capacity from 68 million tires a year to 89 million by 2020.

The Japanese tire maker is far from the only one expanding domestically. New tire plants or expansions are being built in Richburg, Sumter and Spartanburg, S.C.; Clarksville, Tenn.; and Macon, Ga. New plants or expansions recently opened in Aiken and Starr, S.C.; and White, Ga.

Nick Mitchell, an industry analyst with Northcoast Research, said it's a good time to be making tires in the United States. Profit margins have widened as prices for natural rubber and oil have fallen, and demand has been strong, especially for advanced tires.

"In North America, the tire fundamentals are fairly solid," Mitchell said. "Strong manufacturers with good technology are really benefiting from this shift to higher-value tires."

Although Mitchell said the industry has avoided overbuilding, others are worried. Richard Hilgert, an analyst for Morningstar, predicted in July that worldwide expansions will create capacity for 100 million more tires per year.

"We think this will eventually lead to overcapacity that exacerbates industry price pressure," Hilgert wrote.

Yamamoto said competition is less fierce in the truck and bus tire market, and Yokohama is strong there. He said the company can't supply enough tires to meet truck and bus demand. The Rubber Manufacturers Association projects that while overall U.S. demand will grow about 1 percent this year, the market for truck tires will grow by 4 percent.

With the first phase ramping up to full production, attention now turns to whether and when Yokohama will expand.

"I ask them every time I'm with them 'What about phase 2?'" Higgins said.

Company officials aren't giving any official word. But its corporate expansion plan, as well as how rapidly it has expanded a new plant in the Philippines, suggest an answer soon.

"This plant is the base plant to expand our business in North America," Yamamoto said.