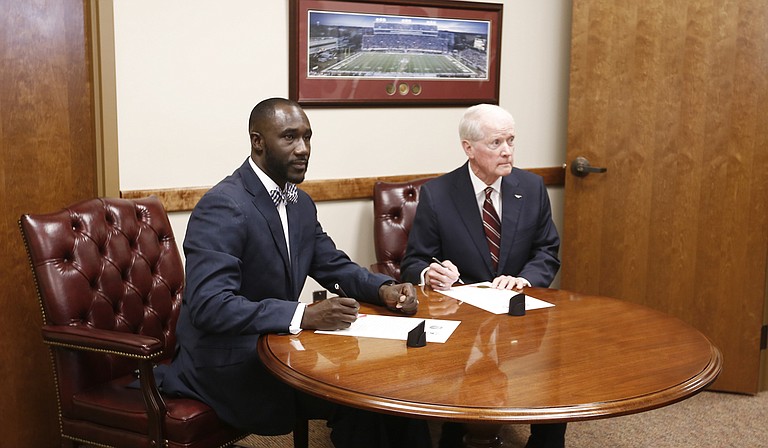 Jackson City Council members and citizens are growing impatient with the slow rate of progress and administrative morass as the capital city continues to collect funds for infrastructure improvements. Specifically, they're asking why Jackson hasn't started spending money from the 1-percent local option sales tax.

To date, taxpayers have generated approximately $21 million from the 1-percent tax that voters approved in early 2014.

City records show that the first year of the tax added up to $15.1 million designated to begin repairs on some 2,000 miles of roadway, 881 miles of water main and 1,000 miles of sewer pipe.

The result of 2009 state legislation, the 1-percent tax is levied on certain retail sales within the city limits. A 10-member statewide commission oversees the collected funds; the Jackson City Council must approve specific expenditures once the commission releases the money.

In May, the sales-tax commission approved spending from the first year of the tax, but so far, little heavy-duty work has started. "People are beating down the door telling us to spend the money," said Ward 4 Councilman De'Keither Stamps, who serves as chairman of the Budget Committee.

Mayor Tony Yarber, who sits on the commission and whose administration developed a Comprehensive Infrastructure Master Plan, told reporters recently that some "low-hanging fruit" issues, such as curb cuts for disability accessibility, have been completed. The first year of the master plan includes reconstruction projects for North State Street, Riverside Drive and J.R. Lynch Street, as well as $672,000 for repair work on five city bridges. None of those has begun.

Recently, additional budget for repairs came in the form of the U.S. Department of Transportation's acceptance of the City's application for a TIGER grant for Jackson's "Greening the Gateways" program. At an Oct. 28 press conference announcing the $16.5 million award with Mississippi Transportation Commissioner Dick Hall, Yarber said the money would go toward improvements along North State Street, which is in year-one of the master plan. Additionally, a section of West County Line Road, where it intersects with North State near Tougaloo College, would also get upgraded.

As a bonus, Hall threw in an additional $3 million to help rebuild pothole-riddled Mill Street. Hall said he grew up in Fondren and wanted Mill, which runs from downtown to Fondren, to be restored to its heyday.

The nearly $20 million extra, Yarber said, would free up cash for other projects in the sales-tax master plan that, eventually, a program manager will supervise.

"I think we're about three to four weeks out from bringing that (recommendation) before the council," Yarber told reporters.

The hiring of a project manager could represent another set of hurdles before turning dirt, however.

In recent months, the Yarber administration has come under fire from the city council for its handling of several RFP processes, including an approximately $13 million contract for hauling sludge away from the Savanna Wastewater Treatment Plant. The city is required to remove the 305,000 wet tons of sludge by Jan. 1, 2018, or face heavy fines from environmental regulators, but the work is stalled amid legal fights between the companies competing for the work along with state investigative reviews.

The city council again voted against the controversial contract on Nov. 3.

Before that vote, Yarber also faced criticism for his proposal to switch health-care plans for city employees and retirees to United HealthCare Services from BlueCross BlueShield, which administration officials say would save $8.6 million over three years. However, with the current policies ending on Dec. 31 and the changeover taking three months, city council members expressed frustration about being asked to vote on Oct. 20, past the deadline for a smooth transition.

"I really want the administration to take heed that this is killing the city," Ward 6 Councilman Tyrone Hendrix told officials representing Yarber, who was not present at the Oct. 20 meeting.

Marshand Crisler, a deputy chief administrative officer and former Ward 6 councilman, said the Yarber administration started the health-plan RFP in July and "put a lot of measures in place to make sure we get it right" although, admittedly, the process "could have been done faster, at the end of the day."

The City issued a request for proposals for program-management services of the 1-percent sales tax projects in June, and council members say they haven't received updates on the status of those proposals. Ward 1 Councilman Ashby Foote said the council's recent frustration over other RFPs could come into play when Yarber presents his recommendation for a program manager for the 1-percent tax program.

"There's been little (information) given about what's been going on with the program manager. My concern is that all these processes take a whole lot longer than they should to get the ball rolling," Foote told the Jackson Free Press.

In an interview with the JFP, Yarber said he has made department heads and chief administrative officers available for council members' questions, but members often decline to take advantage of the opportunity.

"At the end of the day, this whole idea about not knowing stuff and not getting stuff, that's so disingenuous that it outright makes me mad," he said after the biosolids vote.

To help speed up the process, Councilman Stamps said he would prefer that the City hire new personnel rather than award a potentially multimillion-dollar contract to a consulting firm.

"With every problem, the solution ends up being people, supplies and equipment. Why don't we hire the people, buy the supplies, and buy equipment? Everybody wants to contract everything out," Stamps said.

Discussion of new hiring often meets resistance from number crunchers because, in budget terms, employees will draw a yearly salary plus benefits over many years, possibly until they reach retirement age.

"The argument is, well, the money is going to run out. Well, that's 20 years from now," Stamps said. "In the interim, let's stand up an army."