All Statewide Incumbents Re-Elected With Ease 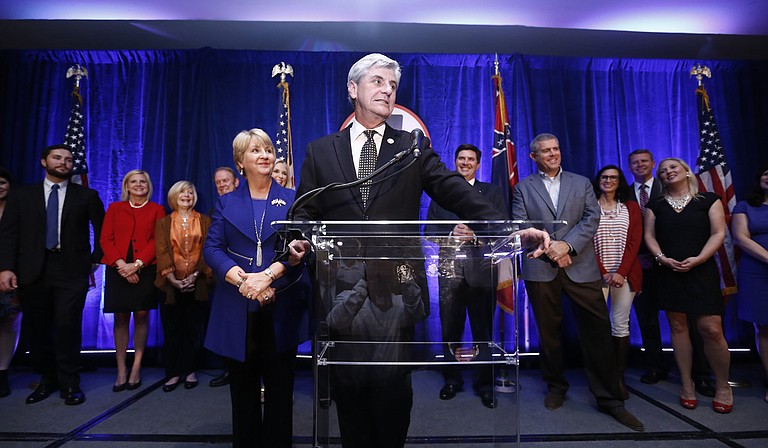 Gov. Phil Bryant, with his wife Deborah (left), addresses the crowd at the GOP election party, after the incumbent candidate easily defeated Democratic challenger Robert Gray to win a second-term as governor on Nov. 3. Photo by Imani Khayyam.

JACKSON, Miss. (AP) — For the first time in a single year, Mississippi voters have re-elected all eight statewide officials.

Republican Gov. Phil Bryant on Tuesday won a second term, easily defeating two challengers who ran low-budget campaigns — Democrat Robert Gray, a truck driver who said he surprised even himself by winning the party primary in August; and the Reform Party's Shawn O'Hara, who has lost many elections the past two decades.

Attorney General Jim Hood won a fourth term and remains the only Democrat elected to statewide office in Mississippi, and one of only a few in the South.

"I get to keep doing the job that I love and hopefully making Mississippi a better place," Bryant told The Associated Press in a phone interview from a victory party in downtown Jackson.

Bryant becomes only the third Mississippi governor in modern times to win back-to-back, four-year terms. The state lifted the longstanding ban on gubernatorial succession in the late 1980s. Republican Kirk Fordice was elected in 1991 and 1995, and Republican Haley Barbour was elected in 2003 and 2007. During the years Fordice and Barbour were re-elected, some other statewide offices changed hands.

In the attorney general's race, Hood was challenged by Mike Hurst, a former federal prosecutor. Hood told cheering supporters at his victory party in Jackson that his mother, who died Aug. 25, had encouraged him to seek a fourth term.

Voters on Tuesday were also filling regional offices and all 174 legislative seats.

Pearl Taylor, who voted at McLaurin Heights United Methodist Church in Pearl, said she supported Bryant and Hurst. Taylor, 67, said she has no complaints about Bryant's work as governor.

"He kind of stands up for the state flag and things like that," Taylor said. "I approve of that. I mean, it's our flag. Why change it?"

The state flag, with a Confederate battle emblem in the upper left corner, has come under increased scrutiny since the massacre of nine black worshippers in mid-June at a church in Charleston, South Carolina. Bryant has said he respects the results of a 2001 statewide election, when voters chose to keep the flag Mississippi has used since 1894. He says if a redesign is going to be considered, it should be done in another statewide election, not by legislators.

Idetra Berry, who voted at New Hope Baptist Church in Jackson, said she voted against Bryant, in part because he opposed Initiative 42, a citizen-sponsored school funding proposal that was defeated Tuesday.

"I'm not very happy with the governor, honestly," Berry said. "He's made some comments and done some things that I don't think reflect the entire state."

Election officials said voter turnout Tuesday was steady. Problems arose in the Delta, where Secretary of State Delbert Hosemann said more than 2,100 people in Bolivar County might have been voting in the wrong state Senate districts.

"It appears the election commissioners in Bolivar County may not have redistricted the new Senate district lines correctly on the ballot," Hosemann said in a statement.