Buy the Lady a Drink 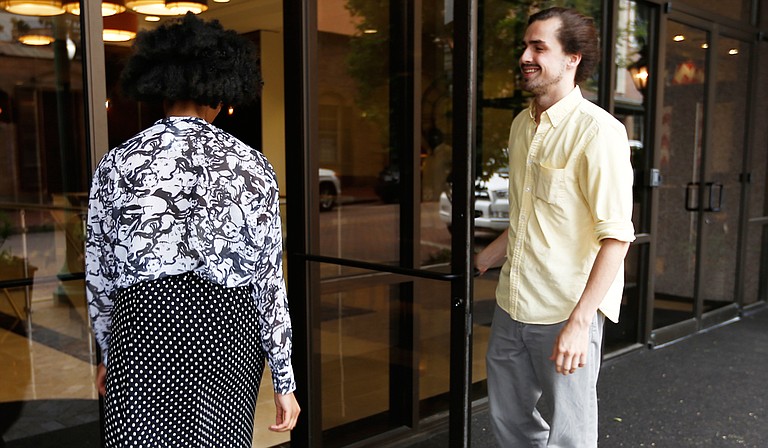 I'm all for chivalry. I'll just put that out there. Sure, I'm physically capable of opening a door for myself, carrying groceries to my car or even killing the occasional spider, but it's also really nice if a gentleman wants to do it for me.

Same goes for other traditional rules of manners, like when walking two-abreast on the sidewalk, a gentleman walks on the side closer to the street, or—and for some reason, this one gets contentious sometimes—the gentleman orders for the table. Some women get all, "I can order for myself," but I like that rule. Note, I did not say that my date decides what I can, should, or will eat and drink. It's fun that we know each other so well that often, we can guess what the other would choose on a menu. But it's definitely a matter of me letting him know what I'd like, and then he orders for both of us. Emily Post and Gloria Vanderbilt would want it that way. And it's just nice.

I firmly believe manners are ultimately about being gracious and courteous and making others comfortable. They're not about being bossy or controlling or making others feel inferior. There's a distinct difference. Unfortunately, when I observe people out and about, the concept of manners and chivalry seems to evade many who are out there in the wild. There's taking charge in a gentlemanly way, and then there's taking charge and being a jerk.

As it so happens, observing people is one of my favorite pastimes. I think you can learn a lot from just watching others and their social interactions. That's one reason I like sitting at the bar in restaurants, as opposed to a table. (Other reasons to bar-sit include the attention you get from the bartender and, if you're with your significant other, the ability to cozy up without being the weird couple who sits on the same side of the table.) When you people-watch, you also see manners—or lack thereof—in action.

One recent night out, my man and I found ourselves bar-sitting at a hip neighborhood restaurant, enjoying a good meal. While we wined, dined, and chatted, I kept noticing the couple on a date a few seats away. The fellow seemed more interested in his phone than his lady-friend, which was unfortunate, but, sadly, not unusual for the times we live in. Heck, I'm as guilty as anyone else of that on occasion, so it was a good reminder to put the phone up and pay attention to the person I was with.

But then, my date, who was closer to the couple than I, did a double-take and nudged me with a, "Did you just hear that?" I had not, so I perked up. When I did, I was horrified. I thought, "If this is what it's like out there in the dating game these days, then chivalry is, in fact, dead."

Here's what happened: The fellow looked at the ticket for their meal, called the bartender over and told him, "I didn't authorize these two drinks (of the lady's), so you're going to need to separate those."

That's right. He made her pay for the drinks that he hadn't "authorized." Now, being a fan of reality television, I know that Patti Stanger, the Millionaire Matchmaker, has a two-drink maximum rule on dates, but that's so the daters keep their wits about them; I don't think it means if your date goes over two drinks, you refuse to pay for them.

I also understand being on a budget. But perhaps if two drinks can throw you off, you should have suggested a different date altogether. This was not a case of, "Oh, let me order your drink for you." This was about control. And that's the opposite of manners, really.

I don't know what happened to this couple. I don't know what the bartender thought when the man asked him to split off those beverages. And I don't know who else out there has encountered such behavior while navigating dating adventures. I can only hope such incidents are few and far between. In the meantime, let's all at least try and learn from things like this. Put the phones down and pay attention to the folks you're with, and by all means, buy the lady a drink.