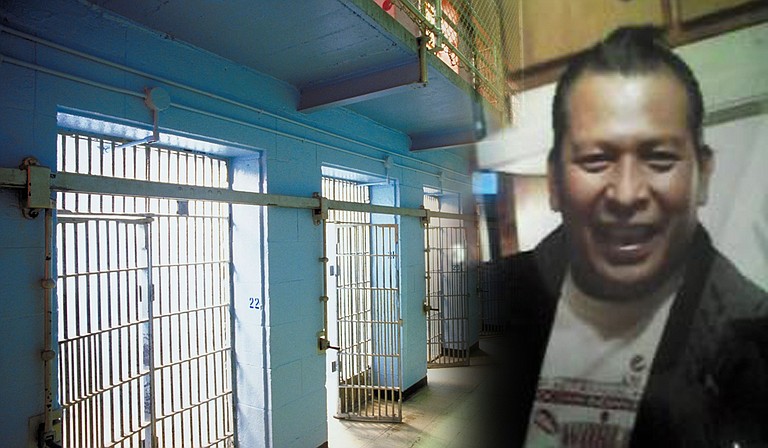 Photo illustration: Rexdale Henry (right) was active in the Bogue Chitto community as a stickball and softball coach. Henry was also a candidate for the Choctaw Tribal Council from Bogue Chitto the week before his arrest on July 9. Photo of Rexdale Henry from Twitter, jail from clip art.

John Steele, a spokesman for the family of Rexdale Henry, who was found dead inside the Neshoba County Jail on July 14, said the family is awaiting the results of two autopsies to know more about how the 53-year-old Choctaw man died.

"His fines shouldn't have lead to his death. It couldn't have been that bad," Steele told the Jackson Free Press this morning.

A clerk at the Neshoba County Justice Court said records showed seven fines for Henry totaling $2,677, but she added that Henry might have paid some of the fines or the amount could have risen because of late fees and other charges.

When the Jackson Free Press called the Neshoba County jail, an officer said that he was not allowed to give information about Henry's case and directed questions to Jimmie Reid, the jail administrator, or Sheriff Tommy Waddell.

Messages left for Reid and Waddell were not immediately returned.

Steele described Henry as active in the Bogue Chitto community as a stickball and softball coach. Henry was also a candidate for the Choctaw Tribal Council from Bogue Chitto the week before his arrest on July 9.

"He was a great family man and just tried to help his people, the Choctaw tribe. He had a closeness with everyone in the community," said Steele, who added that Henry's funeral drew an overflow crowd.

According to WTOK, detention officers found Henry's body around 10 a.m.; he was last seen alive 30 minutes earlier. The state crime lab in Jackson conducted an autopsy, and the Mississippi Bureau of Investigation is looking into the case. The cause of death has not been released.

Funeral services for Henry took place July 19 in Bogue Chitto. A few days later, anonymous donors paid for his body to be flown to Florida for an independent autopsy. Steele said that an inquest is still under way.

Helping with the family's independent probe are civil-rights activists Steele, a close friend of Henry, and Diane Nash, a cofounder of the Student Nonviolent Coordinating Committee, as well as Syracuse University law professors Janis McDonald and Paula Johnson of the school's Cold Case Justice Initiative.

"At a time when the nation is focused on the terrible circumstances of the brutal death of Sandra Bland, it is critical to expose the many ways in which black Americans, Native Americans and other minorities are being arrested for minor charges and end up dead in jail cells," McDonald said in a statement.

Henry's arrest came one day after 39-year-old Jonathan Sanders died during a police stop in nearby Clarke County, which MBI is also investigating. Henry's death occurred one day after employees of Texas' Waller County Jail found Sandra Bland, an African American woman, hanging in her cell. Authorities ruled Bland's death a suicide. Another Mississippi man, Troy Goode, died while in police custody in Southaven on July 18; Goode was white.

Activists also point to the death of Michael DeAngelo McDougle, also in the Neshoba County Jail, less than a year ago, in November 2014. McDougle's family has filed a $10 million wrongful death lawsuit against Neshoba County officials. Attorneys for Neshoba County deny most of the allegations in the complaint.

Henry's family and supporters also invoked the Mississippi Burning murders that took place during Freedom Summer of 1964. On June 21 of that year, local authorities took three civil-rights activists—James Chaney, Andrew Goodman and Mickey Schwerner—to the Neshoba County Jail (it has since been moved) on minor charges before the trio disappeared. The activists' bodies were discovered in an earthen dam 44 days after they went missing.

Steele said the results of the independent autopsy will be made public when it is complete.