Wendy Mahoney: A Woman You Need to Know 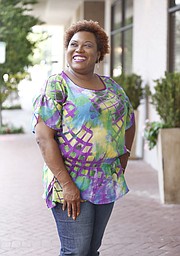 In ninth grade, Wendy Mahoney, now 48, took a career aptitude test that told her that her highest interest is helping others, and she would be a good candidate to become a social services worker. Still, Mahoney didn't need a test to tell her she loved helping people because she had known that all along.

After graduating from Callaway High School in 1984, she attended Tougaloo College. She received her bachelor's degree in psychology in 1988. She was drawn to the subject because mental illness was prevalent in her own family, and she was interested in learning how to help future families in the same predicament.

After her undergraduate studies, she went to Mankato State University in Minnesota, where she received her master's degree in rehabilitation counseling in 1990. Currently, she is working toward her doctorate degree in public policy and administration at Jackson State University.

Mahoney spent 19-and-a-half years in Minnesota, primarily working in children's mental health. Her first job after getting her master's degree was providing in-home family therapy to children with mental illness. She enjoyed serving kids because she felt it was important to provide resources and therapy earlier rather than later in life.

She moved back to Mississippi in 2007 to be closer to her family. After working a few years in mental health, Mahoney then took a brief hiatus to contemplate what her next move would be. While she debated which career move to pursue, Mahoney did some consulting for a company called Divine Strategies Consulting. One day, she saw a posting for the position of executive director at the Mississippi Coalition Against Domestic Violence.

"As a whole, all my jobs up to this point have been about helping people. Just developing focused strategies to help the people and the families that need me," Mahoney says.

"Twenty years ago when I first started, I loved physically helping people and being in their presence. As I've gotten older, I see the big picture. Now, I'm not just helping one person, but we are changing a whole system."

She says she loves her job at the coalition because the organization strives to bring not only awareness, but an overall societal change for an issue that is not addressed often enough: domestic violence.

The Jackson Free Press' annual domestic-violence awareness fundraiser, the JFP Chick Ball, is benefitting the MCADV this year. Over the next few pages, you'll find info about the event, from this year's Chicks We Love to the musical line-up to some of the items you'll see in the silent auction. The JFP Chick Ball is Saturday, July 18, from 6 p.m. to midnight. For more information, visit jfpchickball.com. See pages 18-22 for the Silent Auction Guide., and pages 17-26 for this year's Chicks We Love.