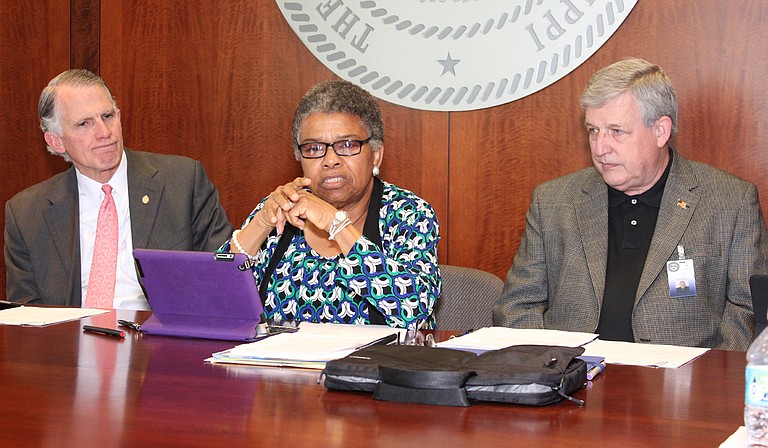 Constance Slaughter-Harvey, center, would have liked the committee to examine other aspects of the state's prison system. Also pictured are Andy Taggart (left) and Bill Crawford (right). Photo courtesy MDOC

No, this list doesn't come from a rehashing of the plot points from the show, "Orange is the New Black," but from the stories about conditions in Mississippi Department of Corrections facilities. Those problems coincided with the downfall of the department's commissioner, Chris Epps, who was convicted on federal corruption charges.

Gov. Phil Bryant convened the Task Force on Contracting and Procurement in November 2014 to examine the prison conditions. Since the five-member commission started meeting, the body has aired concerns about the way the agency awards contracts and general complaints about the state's prisons. The task force wrapped up public meetings June 26, when the panel issued a set of recommendations about how the contracting and resource procurement process work.

Although the task force recommended adding oversight of private contractors for MDOC, some members expressed a general discontent with the task force's limited focus.

"Our charge was so narrow," attorney Constance Slaughter-Harvey, one of the task force's five members, told the Jackson Free Press. "It was more like a reaction to a problem, as opposed to working to create a model prison system. I have a serious problem with any entity that is managed that way."

Slaughter-Harvey says the poor compensation for MDOC guards contributes to corruption in prisons. "At Parchman, maybe 85 percent or at least 50 percent of the guards were young African American females, (many of which) were single mothers. Their wages were terrible. For some, it was $10 an hour. It really touched me. This concern and commitment to change the situation made me happy," she said.

Slaughter-Harvey's advocacy for inmate conditions extends back to her time at the University of Mississippi law school in 1972. She was on a litigation team that won a suit against the Mississippi State Penitentiary at Parchman for the dehumanizing conditions there.

"When I (first) went to Parchman," Slaughter-Harvey said, "they did not have (spit guards) in the dining hall. Feces was not far from the eating area. The manner in which prisoners were disciplined, working from sun-up to sundown, it was terrible. If you did not have an effective advocate, you might die because you did not receive any medical care because you were in the hole. It was really just unimaginable."

As a way to curb the financial incentive of guards accepting bribes, the task force recommended better salaries for the guards. They wrote: "The Task Force believes that corruption at the lowest levels creates a culture that invites corruption throughout the MDOC system, including the procurement process. ... We encourage the Legislature to fund the Commissioner's request at a level that will allow him to realign salaries of correctional, probation and parole officers to a level competitive with other law enforcement agencies."

Although the task force's focus was, at its creation, limited, many like Will Harrell of the American Civil Liberties Union said that the task force's willingness to look at the broader issues affecting corruption showed the board's greatest impact.

"What excites me the most about this work," Harrell said, "is that they had the courage to identify and call out the elephant in the room, which is, generally speaking, an over-reliance on incarceration in the state of Mississippi, which is what drove the state to rely on prisons in the first place."

Thinking back to her time spent in Parchman in 1972, and her visit there with the task force, Slaughter-Harvey sees "a quiet continuation of similar conditions."

"Back in '72, people didn't care, and nobody really wanted to deal with the inmates at Parchman because they were 'wrong,' and they were 'bad,' and they were 'evil,'" she said. "So they gave them hell on Earth. Now, people are aware that there needs to be a concern, but nobody is willing to do the right thing all the way. The problem is what's not there. It's what's not seen."