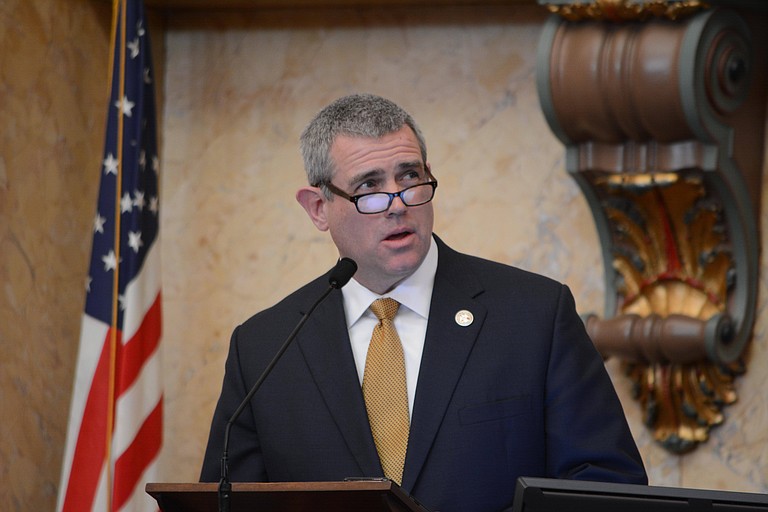 House Speaker Philip Gunn's tax plan could shift this year's debate away from business tax cuts, after lawmakers have enacted more than $350 million in business tax relief since 2012. Photo by Trip Burns.

House Ways and Means Committee Chairman Jeff Smith, R-Columbus, confirmed Monday that he plans to bring forward the proposal in his committee Tuesday.

Smith said Gunn will have a news conference following the committee meeting to advocate for the plan. Gunn declined comment Monday night through his chief of staff, Nathan Wells.

Gunn's plan could shift this year's debate away from business tax cuts, after lawmakers have enacted more than $350 million in business tax relief since 2012.

The move raises the bidding in Republicans' election-year efforts to reduce taxes, even as advocates for education and other state services seek more money. The amount in question is more than a quarter of the current $6.1 billion in state money in Mississippi's budget this year.

"It's a crazy amount," said Sara Miller, an analyst with the liberal-leaning Mississippi Economic Policy Center.

Lt. Gov. Tate Reeves proposed a $382 million tax cut earlier this month. Most would go to businesses by eliminating the $242 million franchise tax, a 2.5 percent levy on business property or capital employed whether a business is profitable or not. Another $131 million of the Republican Reeves' plan would go to phase out up to the first $150 in state income taxes now owed by people and businesses.

"The governor has not seen the details of the proposal, but looks forward to working with the speaker and lieutenant governor to give hardworking taxpayers a raise," Webb said.

The measure will be based on House Bill 1629, introduced Monday by Rep. Brad Mayo, R-Oxford. As introduced, the bill would eliminate all income taxes, including the $300 million-plus paid by businesses. Smith said plans call for amending the bill to apply only to individuals.

The plan would reduce income taxes in steps starting in 2016, phasing them out entirely by 2028. However, the yearly tax cut would be delayed in any year following a year when state revenues went up by less than 3 percent. That means that full elimination could stretch past 2028 depending on how the state budget fares.

Though Republican leaders pledge to spend more in the 2016 budget on K-12 schools, community colleges and universities, increases will still leave those entities short of state commitments. The state is likely to end up $200 million short of the amount demanded by its K-12 funding formula.

"When we've fully funded our children's education, then we can talk about tax cuts," said Patsy Brumfield, spokeswoman for the Better Schools, Better Jobs group, which is supporting a constitutional referendum this fall meant to guarantee adequate funding for K-12 schools.