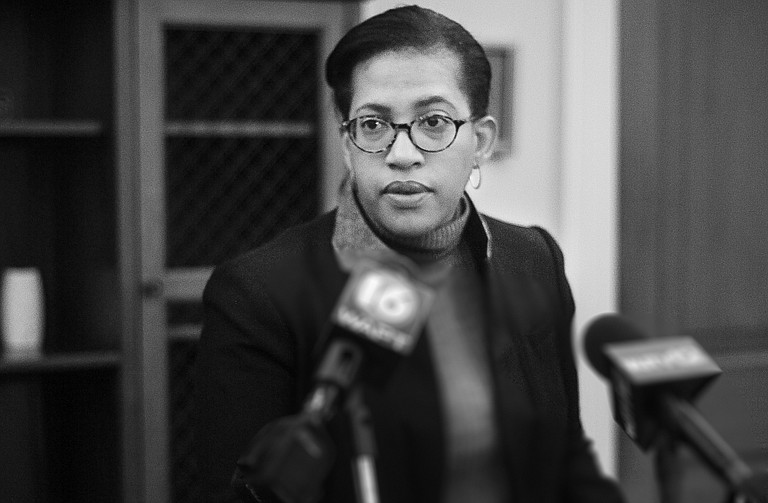 Kishia Powell, director of the city’s Department of Public Works.

After months of complaints from residents about uncharacteristically large water bills, slow progress on the city-wide installation of 65,000 new water meters and skepticism about the prudence of a $90 million deal with Siemens AG, the city's public works director has halted the project as city and company officials scramble to figure out what went wrong and who will pay for the mistakes.

Speaking to reporters at City Hall on Feb. 13, Public Works Director Kishia Powell said she had issued a stop work order upon the discovery that several residents received water meters calibrated to read in gallons instead of cubic feet. Because there are approximately 7.5 gallons to one cubic foot, a reading of a gallon meter can result in a water bill that Powell says is 648 percent higher than it should be.

Powell, who joined the city from Baltimore, Md., last summer, explained that a Jackson public-works inspector had found one of the gallon meters last week and a review of 3,000 meters turned up seven gallon meters. Now, Siemens must prepare a corrective action plan with the city that will include inspection of the 31,000 meters that crews have already installed.

"They are working on it now, and I'm hoping they have something to us by early this week. We don't want to have people overbilled unnecessarily," Powell told reporters.

Jackson Mayor Harvey Johnson Jr. received approval from the city council to ink the deal with Siemens in late 2012. The contract called for the installation of 65,000 new meters that could be read remotely, an upgraded online billing and payment system, and repair of water and sewer lines. The goal was to improve the efficiency of the city's water system, which the city estimates suffers from 40 percent loss of its treated water, and improve water revenue collections.

Siemens subcontracted with Atlanta-based Mueller Water Products Inc., for Mueller Systems' 420 Remote Disconnect Meter. Jackson-based MAC Consultants LLC is the subcontractor the installation of the meters. Marcus Wallace, MAC Consultants' president, declined to comment and referred questions to the city. A representative of Mueller Systems did not respond to a request for comment on Monday afternoon.

Siemens will have to foot the bill for the review. In the meantime, Powell also suspended the launch of a new online billing system, which was scheduled to go live over the weekend. That process came under scrutiny in December, when members of the city council questioned why the billing system switchover was so far behind. James Covington of iVision IT Consultants, also a Siemens subcontractor hired to oversee the implementation of the Oracle-based customer-care and billing software system, said at the time that the city was understaffed, which slowed the pace of implementation.

Similar problems have arisen with Siemens projects in McComb and Monticello, Ark., where city officials entered mediation to end the contract and seek repayment of funds that the city claims Siemens wasted. Last fall, Jackson Mayor Tony Yarber's administration hired a consulting firm to review the city's water department and analyze the Siemens contract, which came with a performance guarantee.

Yarber says he regrets having voted to OK the Siemens contract when he served on the council. That vote became the subject of a rumored federal investigation, which Yarber has publicly denied.

In a recent interview with the Jackson Free Press, Yarber said while he would not necessarily terminate the Siemens deal, he would like the city to realize the cost savings promised in the original contract.

Other city council members have been reluctant to suggest ending the contract as well. Jackson's newest member of the council, however, made no bones about where he stands on it.

Ward 3 Councilman Kenneth Stokes, who rejoined the council earlier this month after spending three years on the Hinds County Board of Supervisors, told WLBT that he planned to propose terminating the contract at the next city council meeting.

"The Siemens contract seems to be a never-ending nightmare. The citizens are asking for help," Stokes told WLBT.