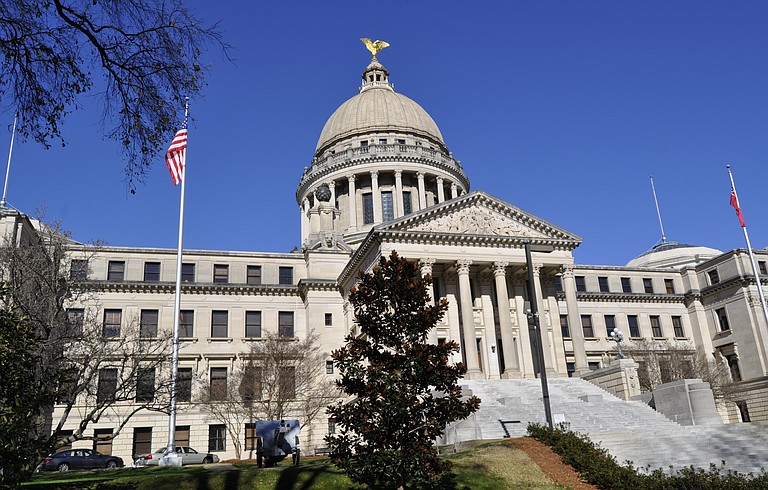 Former state Sen. Tim Johnson jumped from Republican to Democrat last week to launch his campaign for Mississippi lieutenant governor, and he faces a difficult path in a state where the GOP controls seven of eight statewide offices and both chambers of the Legislature. Photo by Trip Burns.

JACKSON, Miss. (AP) — Former state Sen. Tim Johnson jumped from Republican to Democrat last week to launch his campaign for Mississippi lieutenant governor, and he faces a difficult path in a state where the GOP controls seven of eight statewide offices and both chambers of the Legislature.

Republican Lt. Gov. Tate Reeves is seeking a second term and is backed by powerful supporters, including former Gov. Haley Barbour. The 40-year-old Reeves served two terms as state treasurer before winning the state's second-highest office four years ago. He begins this year's race with about $2.4 million in his campaign fund.

Johnson, 55, starts with no campaign cash, and he said challenging a statewide incumbent could cost at least $1 million. Describing himself as a "reformed Republican," the businessman who often performs as an Elvis Presley impersonator was greeted with cheers and loud applause from a few dozen Democrats who stood with him in the Capitol as he announced his candidacy.

Johnson declared the Republican Party "is controlled by big corporate finance and seeks to drive a bigger wedge between the haves and the have-nots."

"The Republican leadership doesn't listen to the people anymore," he said. "If it did, we wouldn't be in the shape we are in today. More people would be working at fair wages, our schools would be funded, our roads would be repaired, we would not have corruption as we see it and our local hospitals durn sure wouldn't be closed.

"I believe that the Mississippi Democrats listen to the people," he said. "The Democratic Party offers people like me — people with a heart for public service — the chance to help others."

Johnson was a first-term Madison alderman when he was elected to the state Senate in 1995. He served two Senate terms, and his central Mississippi district was broken apart when legislative maps were redrawn after the 2000 Census. After leaving the Capitol, Johnson served two terms as a Madison County supervisor, then ran unsuccessfully for central district transportation commissioner in 2011. In every race, he was a Republican.

Johnson filed his most recent campaign finance report in early 2012, and it showed he ended 2011 with no money in his fund.

Mississippi has seen dozens of Democrats become Republicans in the past 20 years, but activity in the other direction has been rare. State GOP chairman Joe Nosef found himself in the unusual position of responding to the defection of a former Republican, and he honed in on Johnson's background as a performer.

"I guess this begs the question of whether he's really been a Republican all these years or just a Republican impersonator," Nosef said. "As a proven vote getter, I expect Lt. Gov. Reeves to win a landslide re-election no matter how many current or future Democrats run against him."

As the campaign progresses, Johnson will have to overcome skepticism from longtime Democrats who might not trust a new convert. But on the day of his announcement, he had some instant fans, including Deborah Henson of Philadelphia, president of the Neshoba County chapter of the Mississippi Federation of Democratic Women.

"That took a lot of heart to do that," Henson said of Johnson's party switch.

State Rep. Bryant Clark, D-Pickens, said he's confident Johnson can appeal to longtime Democrats, and even to people who don't belong to either major political party.

"Mr. Johnson's feelings, I think, are the feelings of a lot of people in Mississippi who traditionally consider themselves conservative," Clark said. "He's going to have a message that's going to resonate with a lot of people."