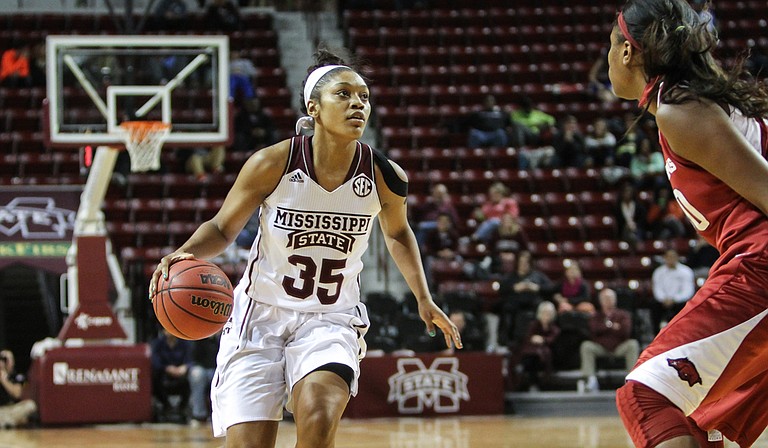 Lady Bulldog Victoria Vivians helped lead Mississippi State University to a banner season last year, and this season is looking even better for her and the team. Photo courtesy MSU Athletics

The history of the Mississippi State University women's basketball team is light on success, to say the least. The team began play in 1974 and didn't make the NCAA Tournament until the late 1990s. It wasn't until 1988 that the program reached the National Women's Invitational Tournament for the first postseason berth.

But things started to change when Sharon Fanning-Otis was took over the program, starting in the 1995 season.

Fanning-Otis laid the foundation for success in Lady Bulldogs basketball. In 1999, she led the Lady Bulldogs to reach the NCAA Tournament, helped the team earn its first national ranking in 2000 and took Mississippi State to the Sweet 16 during the 2009-2010 season. The highest ranking the program achieved at any point was No. 10 in 2003.

Fanning-Otis retired and left the program in 2012, and current coach Vic Schaefer took over. In his second season, Schaefer brought the Lady Bulldogs to the quarterfinals of the Women's NIT.

Last season, he added the most coveted women's high-school basketball prospect in the state of Mississippi: Victoria Vivians. The five-star player out of Scott Central High School was just about a legend in girl's basketball in Mississippi before her career was even done with the Lady Rebels.

It didn't take long for her to make an impact on the team. She helped lead it to a school-record 27 wins in a 27-7 season that included an 11-5 mark in SEC play and 10-0 in nonconference games. Those 11 wins in conference play set a school record. The team also had a school-best 18 straight wins at the beginning of the season and spent 17 consecutive weeks in the Associated Press Top 25 Poll, which broke yet another school record.

The Lady Bulldogs won 20 games in back-to-back seasons for the second time in program history and improved 10 spots in the SEC standings. MSU women's basketball reached the Women's NCAA Tournament for the first time since the 2009-2010 season.

Last year, Vivians led the Lady Bulldogs in scoring with 14.9 points per game and was the top scoring freshman in the SEC and third overall in scoring in the conference. She received honors such as Second-Team All-SEC, SEC All-Freshman, AP All-American Honorable Mention and Full Court Press Freshman All-American Second-Team. Vivians won the 2015 C Spire Gillom Trophy, which the Mississippi Sports Hall of Fame and Museum gives to the best women's basketball player in the state of Mississippi. The budding superstar also got it done in the classroom, as she was named SEC First-Year Honor Roll.

The Lady Bulldogs started the 2015-2016 season ranked No. 11 in the AP Poll and No. 13 in the USA Today Coaches Poll, but thankfully for State fans, the team didn't peak there. Just a few short weeks on the court, these Lady Bulldogs have already set a new school record for the highest ranking at any point by being ranked No. 8 in both the AP and Coaches poll.

After a 5-0 start, the Lady Bulldogs lost a close 53-47 contest to sixth-ranked the University of Texas before immediately hitting their stride again to reach 12-1 for the season thus far. However, the Lady Bulldogs don't start SEC play until the new year and still have a ranked University of South Florida team to play in the non-conference schedule on Dec. 30.

There is no question that Vivians is the favorite to win the Gillom Trophy this season. She could be a part of a MSU sweep of state basketball awards this season.

The main question is: What new highs are the Lady Bulldogs going to reach this season under Schaefer and Vivians? Right now it seems like the sky's the limit for the MSU women's basketball program.