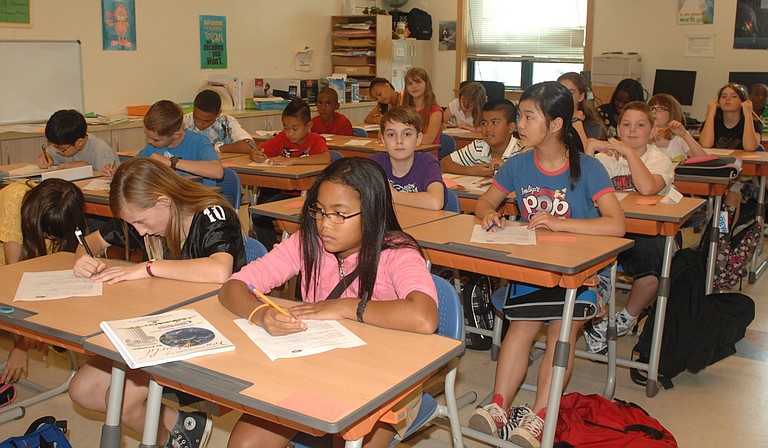 Sixty percent of Mississippi’s students, grades 3 through 8, scored at or above the average level on math and English assessments released Dec. 17. Photo courtesy Flickr/USAG Humphreys

It was most of the students' first exposure to the Partnership for Assessment of Readiness for College and Careers exams, an assessment that was intended to align with Mississippi's college- and career-readiness standards. The tests were also the final installment of PARCC, a testing consortium the state is leaving after just one year.

Each student took an English language arts test, as well as a mathematics exam. The test results were ranked on a scale of 1 to 5 with a 1 being the lowest and 5 the best.

On average, almost 60 percent of all Mississippi students scored at a level 3 or higher. However, those scores vary widely when broken down into separate districts and grades.

"We have a long way to go, but at least this is a pretty good foundation," State Superintendent Carey Wright said during a Dec. 16 conference call with reporters.

Dr. J.P. Beaudoin, chief of research at the Mississippi Department of Education, told media in a conference call that Level 3 students are approaching expectations and know a significant amount of content, but they might need some additional assistance.

The department's strategy for improving test scores largely relies on professional development and teacher training. Wright pointed to the findings of an independent consulting firm showing that what teachers learn in the trainings are used in their classrooms.

Wright asked for increased funding for teacher trainings back in the fall during legislative budget hearings, and she said the department plans to provide professional development to MDE staff in the coming year.

Districts, however, will have to provide training on their own or use the teaching coaches assigned to certain low-performing districts in the face of proposed budget cuts.

After this year, MDE will introduce its own assessments that officials say will match if not exceed the rigor of the PARCC assessments, thus making scores released publicly today a new baseline for third- through eighth-grade students in the state of Mississippi.

On Dec. 15, the committee released its proposed fiscal-year 2017 budget plan that cut the department's budget for general-education programs—the part of the budget that funds the Literacy Initiative and Assessment, including teacher trainings. MDE asked for  $189 million for the general-education segment of the budget alone; in the legislative budget office's recommendation, MDE would receive only $170 million literacy initiatives.

Wright said she asked for increased funding for teacher trainings back in the fall during legislative budget hearings, and that the department plans to provide professional development to their own staff in this coming year. Districts, however, will have to provide training on their own—especially now in light of recent proposed cuts.

Last year, the Legislature did fund teaching coaches for struggling school districts. Wright said, for now, school districts should really utilize their coaches, especially to help students who scored at Levels 1 and 2.

Students need to be caught up despite the state leaving the consortium because Mississippi's own standards will meet or exceed PARCC standards.

The state's learning standards went through a series of changes and review in recent months. A committee of teachers, administrators and parents has released suggested changes to the standards.

On math tests, the committee wants to add specific details to standards (for example, putting "addition and subtraction of integers" in the standards for grades 6 to 8) as well as rewrite other standards for clarity.

The committee asks that learning standards include glossaries of terms for the English language arts exams. From the most recent public-comment period, 90 percent of Mississippians approve of the updates to the standards.

The committee's latest edited standards are available for public comments until Jan. 12, 2016.

All results can be found at www.mde.k12.ms.us/MCCRS/parcc.