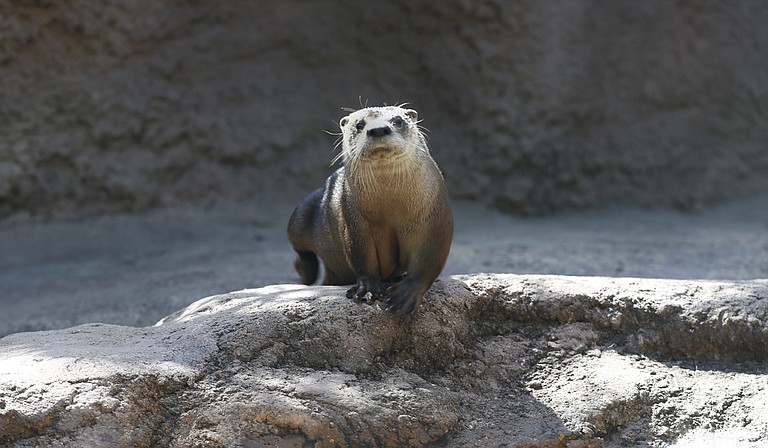 The Jackson Zoo has a new creature on the block: Spanky, a 1-year-old male North American river otter. He arrived in May and recently made his otter exhibit debut.

Spanky came to Jackson from the Buffalo Zoo in Buffalo, N.Y. Too young to develop a New Yorker accent or walking pace, he seems to be settling into Mississippi culture just fine. He is charming and bit of a show-off, even with a small audience. Never in the same spot for more than a few seconds, he darts around his exhibit, swims deep in the water, climbs up on a waterfall, rolls in the dirt and plays with a weed or a pebble to entertain himself.

His curiosity, zookeeper Sarah Baumgartner said, is refreshing and makes him a great exhibit animal. Spanky is the Jackson Zoo's only male otter, and at over three feet long, he is also its largest. He gets to occupy the exhibit on his own and takes turns with the two females, Magnolia and Nipper, who have yet to meet him.

The zoo staff plans to have Spanky breed with Magnolia, who is also 1 year old, but it will all depend on how well the two get along. Baumgartner said it's entirely possible that she will want nothing to do with him.

Spanky is definitely working on his swagger in the mean time, leading up to when the pair will meet. "He is really curious; he plays with everything," Baumgartner said.

River otters are fresh water mammals, and they can be underwater for up to five minutes. They are one of 13 different species of otters in the world. They are in rivers across North America and primarily eat fish. The species maintains its waterproof coat by rolling in the dirt on land, Baumgartner said.

Otters are social creatures, but unfortunately, their charm is best enjoyed behind the glass. They can display aggressive behavior if confronted in person. In captivity, otters live to be 25 years old on average.