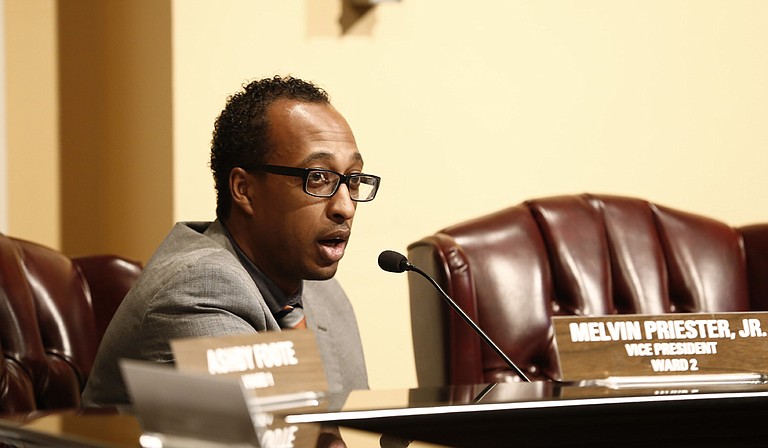 City Council President Melvin Priester Jr. said the council’s counterproposals to Mayor Tony Yarber’s budget are not set in stone and represent an ongoing negotiation with the administration. Photo by Imani Khayyam.

Jerry Taylor, like many of the people at Wingfield High School, was hopping mad about the City of Jackson's finances and a tax increase proposed to fill a budget deficit.

Like many Jacksonians, Taylor first asked two members of the Jackson City Council where the proceeds from the 1-percent sales tax had gone. When the councilmen who hosted the town-hall meeting, Tyrone Hendrix and Melvin Priester Jr., explained the bureaucratic hoops the City has to jump through to spend the money, Taylor asked why not replace the controversial 10-member oversight commission. After the meeting, Taylor, who lives and owns rental property in south Jackson, still seemed less than satisfied with their responses.

Taylor, who grew up in Arkansas and moved to Jackson 15 years ago from Fort Dodge, Iowa, with his then-wife, is worried about the 8-percent Mayor Tony Yarber floated to help shore up the City's budget.

If the tax hike goes through, Taylor said he would rather absorb the increase than pass it along to his renters, but he would rather not have to shoulder any additional cost.

"I'm looking at all the people buying property," he told the Jackson Free Press. "We're buying property, but we're not getting return back from the City, where you're buying the houses that are dilapidated, torn down and you're fixing them up and putting people inside the houses, but the City comes back and takes more than what you're putting into the houses. I think that's unfair."

In that sense, Taylor has some backup on the city council, which has outlined $7.6 million in savings in order to avoid both the tax hike as well as another proposal to furlough city workers. Yarber proposed a one-day-per-month city-worker furlough and a tax increase as well as using the City's reserve account, called the fund balance, to close the budget gap. Council President Melvin Priester Jr. presented the council's alternative, a 10-point plan consisting mostly of freezing job vacancies that are budgeted for but currently unfilled in addition to making other staffing cuts.

Speaking at the Wingfield forum, Priester said the council's proposal is designed to "make sure we don't create more dilapidated houses" by raising taxes and prompting people to abandon properties and flee the city for the suburbs, where taxes are cheaper. Priester told the audience that the council's moves are akin to moving around credit-card balances in order to pass a balanced budget.

Details of the council's alternative include:

• Instead of holding $4.3 million in reserves for a Jackson Redevelopment Authority loan to buy land for a proposed convention-center hotel, the council proposes to hold $1.5 million. Under the agreement between the City of Jackson and JRA, a quasi-governmental organization, Jackson agrees to backstop JRA's financial dealings. However, JRA officials told the city council recently that the authority would refinance the loan. The $1.5 million would provide collateral for the city in what council members say is the unlikely event JRA cannot refinance it.

• Freeze more than $2 million slotted for positions at the police, fire and public-works departments.

• Reducing expenditures on outside consultants by at least $115,000.

• Reducing expenses on software and equipment.

• Reducing the Department of Parks and Recreation budget, including for maintenance at the city's golf courses.

De'Keither Stamps, the Ward 4 councilman and chairman of the Budget Committee, said despite the freezes, department heads would still be able to ask the city council for additional funding in the case of an emergency, such as a crime spike or massive infrastructure failure.

He added that the council plan is designed only to stave off the need for a budget cut and furlough and would not close the $15 million hole in the budget.

"The rest of it we have to work out," Stamps told the Jackson Free Press. The council plans to introduce plans to increase revenue, including for $20 million in outstanding water and sewer bills. Ward 1 Councilman Ashby Foote has proposed using JPD to collect delinquent water bills and splitting the revenue with the department. Foote also suggested turning over management of the golf courses to the Jackson State golf program and finding a nonprofit organization to take over running the Russell C. Davis Planetarium.

At a budget presentation where members threw out money-making ideas, Stamps said he wants the City to get into the asphalt-manufacturing and water-bottling businesses. He added that the City should charge the state for providing JPD security to the state fair in October. The City has unsuccessfully made the same request of the state over the years.

City officials have stressed that the mayor controls staffing and could still proceed with the furloughs despite the council's recommendation. In a statement, Yarber said that he would take the council's proposals under consideration, adding that "council members have verbally proposed measures that will ultimately result in mass layoffs, which the administration had hoped to avoid."

"I am deeply concerned about the impact on public safety, mainly because council members have proposed significant reductions in the Police Department and the Fire Department. The council has also proposed drastic cuts to the Department of Public Works and this comes at a time when the department has begun making progress on street resurfacing and other road issues," Yarber said in his statement.

Yarber will hold a public budget forum at 7 p.m. on Aug. 27 at Progressive Missionary Baptist Church, located at 2323 Powers Avenue in Jackson. The city must pass a budget by Sept. 15 for the fiscal year that begins Oct. 1.